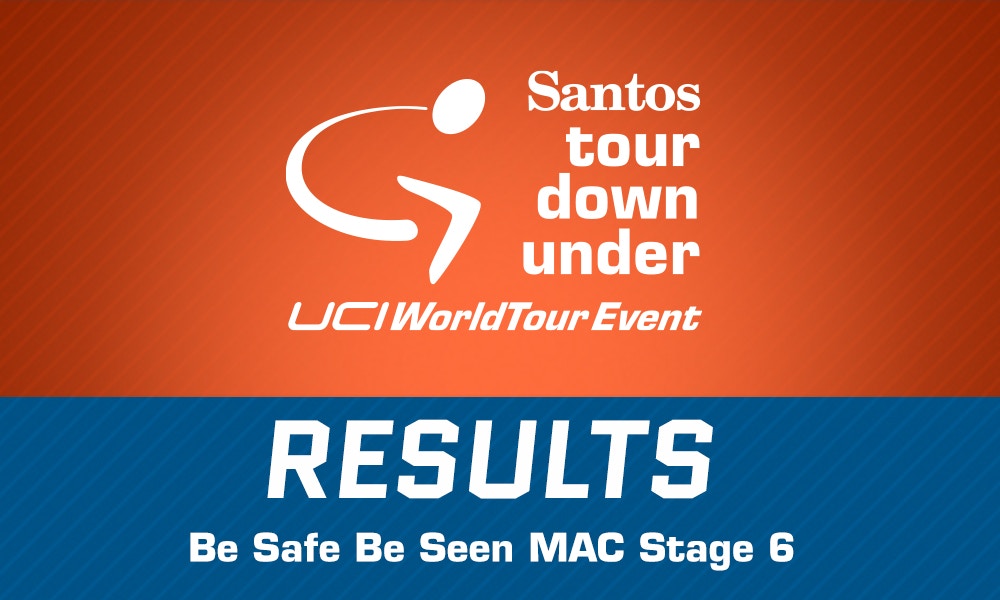 An exciting week of racing culminated in the heart of Adelaide with a 90km circuit that promised to be FAST!

These small margins meant that every point on offer would be hotly contested, and Team Sky would be doing everything they could to get Richie Porte into the Ochre jersey.

The field was strung out early, but on lap two a strong group of five got away; Greg Henderson of Lotto Soudal, Nathan Haas of Team Cannondale – Garmin, Calvin Watson of TREK Factory Racing, Manuele Boaro of Tinkoff – Saxo and Alexis Gougeard of AG2R La Mondiale.

Orica-GreenEDGE were intent on bringing the breakaway back together before the first iiNet intermediate sprint of the day. They timed their run to perfection catching the break in sight of the line, and crossing in first and second place, Daryl Impey taking out maximum points helping his defence of the iiNet sprint jersey.

None of these riders threatened any of the categories, coming as a relief to BMC, UniSA-Australia and Orica-GreenEDGE. This left the chase up to the sprinters' teams thinking of a stage victory, and as a result the gap quickly went out to over a minute.

This group went through the first Subaru King of the Mountain contest without fuss, solely focused on maximising the gap back to the peloton. Lars Boom took out the points, albeit with a view to greater things.

A familiar story for the second iiNet sprint; Lars Bak crossing first with the gap back to the peloton now well over a minute.

History repeated on the second KOM contest; Lars Boom again crossing first, meaning that Jack Bobridge would secure the Subaru King of the Mountain Leader’s jersey. For the first time since the breakaway formed, the time gap began to fall, dropping to 40 seconds in no time at all as the peloton began to organise itself.

The average lap speed went up to almost 50kph causing a huge crash with a lap and half to go. Half the group were taken out of the race, most notably Marcel Kittel, who would remain winless in the 2015 Santos Tour Down Under.

Orica-GreenEDGE flew up the final Montefiore climb and were in poll position coming into the final sprint with Mathew Hayman leading out Daryl Impey.

Unfortunately having lost two of their riders in the earlier crash, they ran out of firepower as the other sprints started to line up. IAM Cycling came to the front in the final few metres but Wouter Wippert stole the prime position from Heinrich Haussler, and was able to carry that momentum through for the victory. A great win for Wippert who at one stage was off the back of the peloton and had to be brought back by his teammates. So close again for Haussler who finished second, the podium rounded out by a freelancing Boris Vallee.

A great day for the Australian team Drapac Professional Cycling, and a changing of the guard for BMC Racing Team, with young Aussie superstar Rohan Dennis winning the 2015 Santos Tour Down Under.

Cadel Evans finishes his last professional multi-stage race (his final hoorah coming soon along Victoria's Great Ocean Road) with a podium position and many thanks from the adoring public.