The First Week of the Vuelta 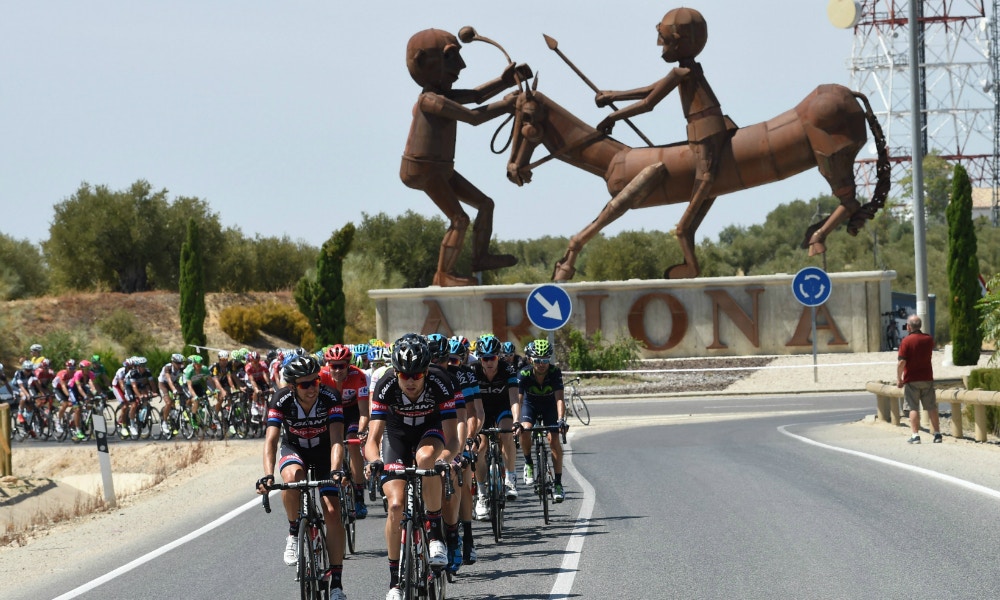 The Vuelta a Espana has had everything in the first week - fairytale wins, huge crashes, some controversy, but mostly lots of incredible racing. The red jersey has changed hands a number of times, the varied stage profiles have delivered something for the sprinters, climbers and rouleurs, and we have seen the emergence of a couple of future superstars.

Here's all the action from the first week of the Vuelta.

OGE in GO BIG in the first week!

Esteban Chaves has to be the happiest, most well loved man in cycling. His infectious attitude and beaming smile hide a ferocious competitor and on Stage 2 and 6 we saw the best of Esteban.

It was during this stage that Orica-GreenEDGE Sport Director Neil Stephens was yelling at the diminutive Colombian to "GO BIG!" on the final climb of the day, and that's exactly what he did. Chaves dropped Nairo Quintana and played with Tom Dumoulin into the finish, crossing the line with a salute, the stage victory and straight into the leader's red jersey.

Chaves said after the stage, "I want to leave skin on the road to keep the red jersey. This is the reason I am a rider, I will try to stay in front for as long as possible."

How can you not love someone with that attitude?!

Chaves would lose the red jersey on stage 5, but on the difficult uphill finish on stage 6 he would reclaim it with what has to be the best race of his career so far. He attacked a select group of riders approaching the steepest part of the final climb and try as they might, no one had the legs to go with him. For anyone who watched the OGE Backstage Pass from stage 6, you can see why there is so much love for the Columbian. He has a great sense of humour, along with a smile that lights up a room, but also the drive and fire to bury the best riders in the world. Not to be out done, the Jet Caleb Ewan took centre stage on a tough uphill sprint on stage 5. Orica-GreenEDGE's young gun has been touted as the next Robbie McEwen or Mark Cavendish and he showed exactly why, proving too fast and too strong for seasoned riders John Degenkolb and Peter Sagan.

Orica-GreenEDGE rode the perfect race and set up the sprint perfectly, but it was still down to Ewan to get the job done. The win was a great sign of maturity and strength, which are remarkable qualities for a 21 year old riding his first Grand Tour.

Orica-GreenEDGE teammate Simon Gerrans took to Facebook to give an insight to how good these two young riders are, "I look forward to telling my kids in years to come, I was teammates with Caleb Ewan when he won his first Grand Tour stage and Esteban Chaves when he wore his first Grand Tour leader's jersey." The Grand Tour 'whose is bigger?' competition

The Grand Tours are all fighting to be the best. The Giro has the super high mountains with ridiculous gradients, the Tour is... well THE Tour, and the Vuelta is always looking for ways to put itself on the map. Clearly this year in the opening TTT, they went too far.

The opening TTT was 7.4km with over half of the course run on sand... that's right; sand. Riders and teams voiced their concerns, and the UCI was forced to intervene with the race organisers and eventually it was decided that due to safety concerns, the stage results would not count towards the individual riders' times, only to the teams classification. The stickiest bottle in history

On stage 2, Vincenzo Nibali was spectacularly thrown out of the Vuelta.

Anyone who saw the footage would be staggered by the blatant disrespect for the rules. Nibali would say afterwards, “what happened in the Vuelta happens in every race"...

But not like this. No rider is foolish enough to hold on to a team car sitting on 75kph to bridge across to the main group. Even moreso when you are a GC contender and all eyes are upon you.

He would later say that Orica-GreenEDGE young gun and Vuelta rookie Caleb Ewan caused the crash, not holding back his feelings, “he made a crazy, bad move. Go and watch that clip too, and you’ll understand why riders got injured. But he’ll stay in the race. I was looking for him while I was waiting for my replacement bike, but fortunately for him he had already set off again. I had something to say to him.”

In hindsight Nibali may be regretting those comments, as race footage clearly shows Ewan at the back of the peloton when the crash occurred.

The Shark has had a year to forget, but with an unscheduled three week vacation on his hands, he may be fresh for the World Championships in a few weeks. A preview to the World Championships?

La Vuelta is always a race that riders use for either getting into shape for the World Championships, or for testing their form. And no one has better legs leading into the World Championships then the boss, Peter Sagan. If it wasn't for a careless motorbike knocking Sagan down on stage 8, who knows how many victories he could have picked up; his red hot form suggested plenty. Sagan was victorious on Stage 3 in a sprint and held on to some of the best climbers in the world on the uphill finish on stage 4 to come second. Surely this is the most complete bike rider in world cycling?!

The stage 3 finish was a familiar scenario for Sagan who was left to freelance in the final few hundred metres, jumping on board the Giant - Alpecin train before surging past John Degenkolb for the win. Despite being one of the most dominate figures in the peloton over the last few years, it was Sagan's first Grand Tour win since 2013!

After finishing second on stage 4 with the brutally steep finish, Sagan said, "the last climb of about 400m was horrible. I honestly thought that was the end for me. However, when I saw all the climbers I passed, I said to myself I should make a last effort".

Before abandoning the tour following his run in with the motorbike, Sagan gave an ominous warning to his competitors ahead of the World Championships, "I’m here at the Vuelta to do the best for my team and to get race kilometres into the legs before the World Championships. It’s good to know already that I have some speed in the legs and then we’ll see how it goes,"