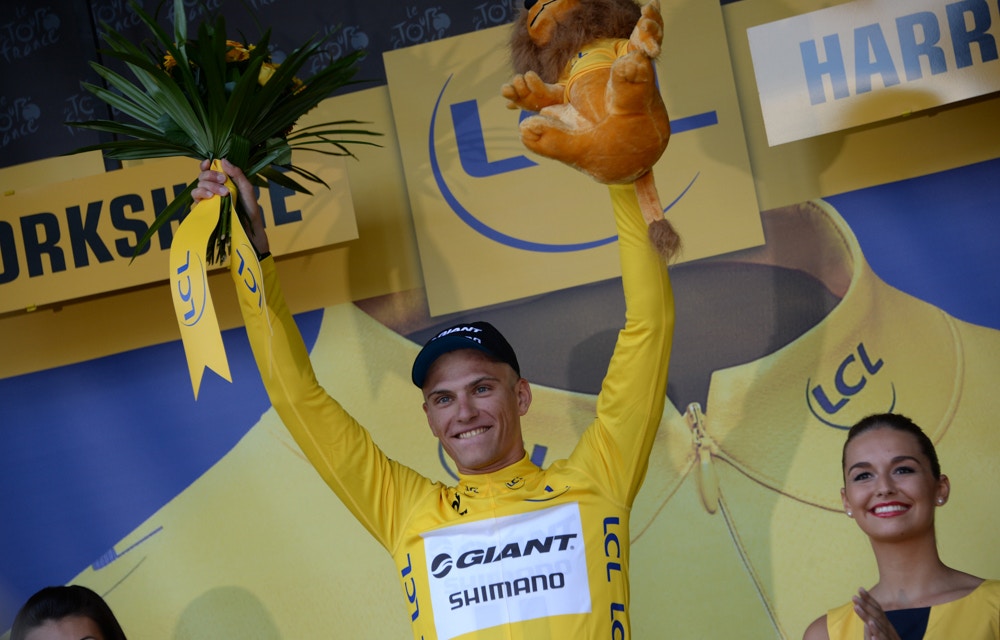 And today's first day of Tour de France racing shows us that nothing can really ever be predicted! See here race results as well as a recap on the thrills and spills from the day. Giant-Shimano showed a brilliant display of team riding today as they took their leader, German sprinting sensation Marcel Kittel, to victory in the first stage of the 2014 Tour de France.

The win came despite an explosive effort by Fabian Cancellara (Trek Factory Racing) that kept things interesting right to the very last minute.

But the day did not escape a surprising crash just hundreds of metres before the Harrogate finishing line. Local favourite Mark Cavendish (Omega-Pharma – Quickstep) has apologised for making contact with Simon Gerrans (Orica-GreenEDGE), resulting in a spill for both cyclists and an end to their respective missions for the day. Cavendish, who up until the crash had placed himself for a strong sprint contest to the line, had apparently attempted to find a gap that “wasn’t really there”. The split decision may well have cost Cavendish more than stage one’s yellow jersey. He was on the ground for some time and appeared in considerably pain holding his collar bone. A hospital examination revealed ligament ruptures with an AC-joint dislocation. A decision as to whether or not the Missile from Manx is to continue to race the Tour will be made on day two.

Gerrans, who was equally well-placed to challenge for the day’s yellow jersey, responded later in the day via Twitter, acknowledging “I’ve had better days & I’ve certainly had a lot worse. Crashing is just part of what we do. I hope @MarkCavenish & Julien Simon are OK.”

Today’s victory is essentially a repeat of Kittel’s performance on stage one of the 2013 Tour de France in Corsica, where he also took the yellow jersey early on. Unlike 2013 however, Kittel received a royal welcome to the Podium (The Duke and Duchess of Cambridge as well as Prince Harry were at both the start and finish of today's racing).

Stage one will also be a memorable day of racing in part thanks to seasoned Grand Tour pro, Jens ‘Jensie’ Voigt (Trek Factory Racing).

The breakaway specialist with the famous ‘shut up legs’ showed once again that pain is no barrier, and put it all on the line to not only take out the day’s polka dot jersey, but show crowds that his final Tour would be remembered for all the right reasons.

Familiar with the cobble walls typical of the area, Jens knew there was only width for a maximum of four cyclists, and so he made it his prerogative to break-away with the first riders who did so. Beaten in the first KOM of the day, Jens knew he would have to drop his break-away bunch in order to take the jersey title. He pulled away in the first intermediate sprint and launched an epic solo ride over the following two categorised climbs. Pushing the big gears and with pure pain all over his face, the hugely popular German at times waved to spectators, possibly acknowledging their support on the day but also perhaps starting his farewells – this race marks the final Tour de France for the 42 year old.

The other stand-out in our first day of racing would have to be the Yorkshire countryside and its people. From rolling dales and gushing rivers, emerald green paddocks and perfectly-preserved towns, Great Britain put on a marvellous show – complete with superb conditions and of course, a Royal send-off. An estimated two-million spectators lined the roads and towns in support of road racing’s greatest show on Earth.

It’s been an eventful day of victory, upsets and battles, and we can’t wait for stage two!