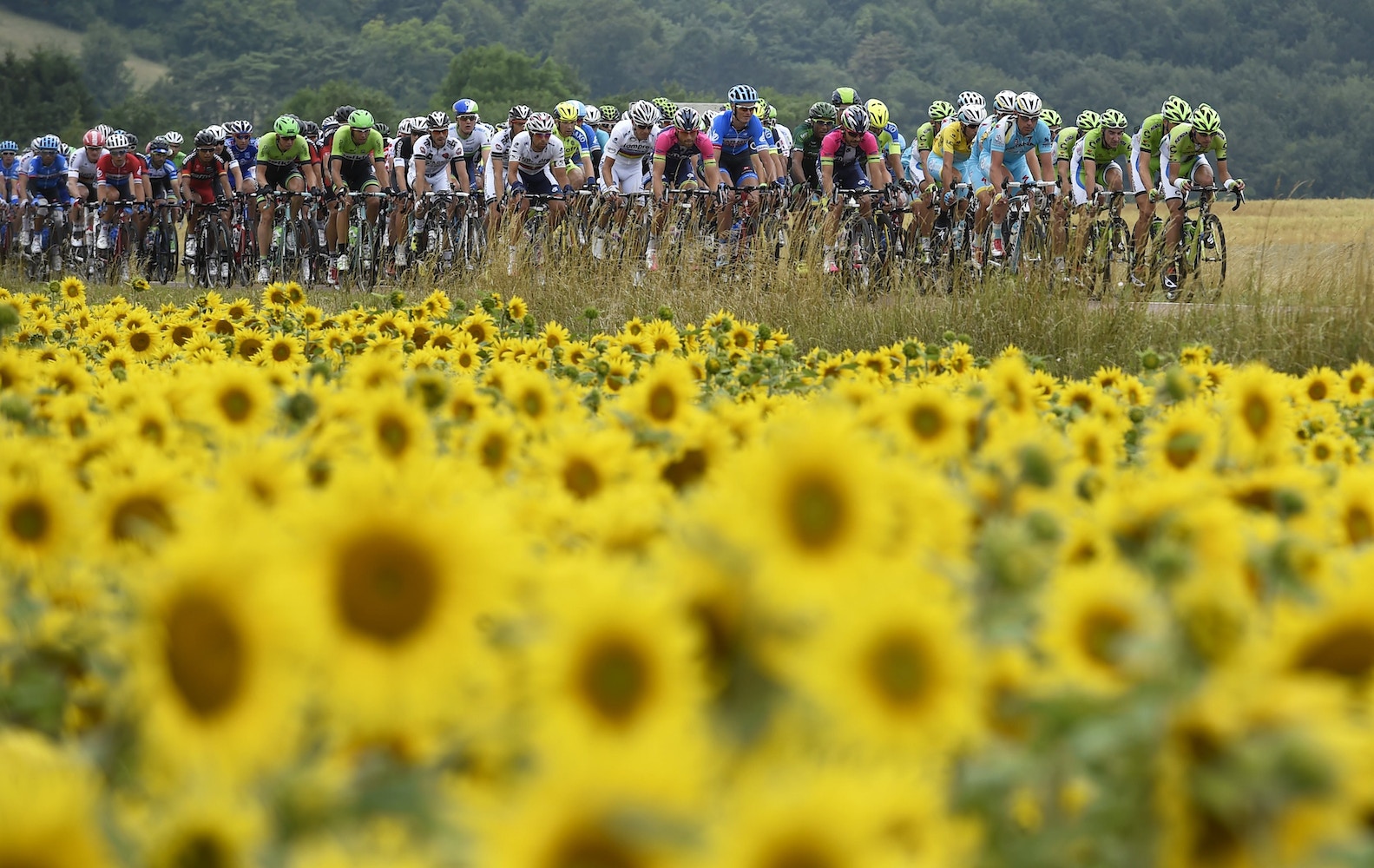 They’re like an economics report; ask ten experts and you’ll get ten different opinions. The thoughts on which stages are pivotal are contentious... But it's the added extensive list of maillot jaune contenders that makes a real race prediction about as scientific as throwing the gherkin from your Big Mac against the window and betting how long before it falls.

Well, maybe not that random.

However, I am going to run with the school of thought that this year’s Tour, in a similar vein to recent editions, will actually have the leader appear in the first ‘half’ of the race. Sky might have claim to the phrase, however Cadel Evans in 2011 showed they are not the only riders capable of ‘marginal gains’. Creating small time gaps in the early stages caught the general classification riders out and put them under early pressure. Bradley Wiggins in 2012 did the same to Cadel Evans – starting with the prologue. Chris Froome torched the field in stage 8 of 2013 and in 2014 I was on hand to watch Vicenzo Nibali stamp his claim to the yellow jersey with an audacious ride over the cobbles in stage 5. Wait at your peril for the last seven days GC contenders, as this year my predictions are for more of the same.

Here are my key stages for the 2015 Tour de France.

No prologue this year (technically any tour TT start longer than 8km is a ‘stage’, not a prologue) and a pancake elevation profile is the only simple part of this TT. Raw power will need to be matched by some sleek handling skills. When you consider every year there’s a GC rider who states in a post-TT press conference how little they’ve trained on their time trial bike, I expect there will be time gaps born of a simple lack of preparation. Sandbagging and cycling go hand-in-hand, but this is not the kind you want to be using to kick off a Grand Tour.

Set up for Classics riders. Or at least that’s what the stage would suggest on paper. The Mur de Huy is the finishing climb in the Ardennes Classic La Fleche Wallonne – and it just so happens that two of the past four winners are riding the Tour. While riders like Orica-GreenEDGE's Michael Matthews and Simon Gerrans will fancy their chances for the win (and possibly a shot at taking the yellow jersey), there is a real chance for GC riders to again give away precious time. The real issue is not just being alert, it’s the road. Factor in barriers and the crowd, and six riders wide is the best to expect up the 1.2km road (and that is assuming no crashes). Movistar's Quintana could not have a better man in Alejando Valverde, to position him for it. Astana, BMC and Sky too look to have enough Classics experience. So keep an eye of AG2R and FDJ – Pinot and Bardet could well get caught out.

Let's hear from the voice of cycling - Phil Liggett

If teams have not learned after the cobbled stage of 2014, well, more fool them. Even with the cancellation of pave sectors due to immense amounts of rain (which I can verify, as I stood in it!), there was more than enough for the general classification to cop more shake ups than the riders over the stones. Nibali finished third, Contador finished two and a half minutes behind and Chris Froome finished in hospital. Teams have done more reconnaissance of this year’s stage. You only have to look at the lack of cobbled depth teams like Tinkoff-Saxo, FDJ and AG2R have compared to those of Lotto-Jumbo and Astana. The maillot jaune race was over after the cobbles in 2014. It was coincidentally one of the best Tour stages in years. Only what made it so great also made the undoing of many. The mountains might not come soon enough for some of the riders.

That stage in 2011 I mentioned that Cadel won – it was atop the Mur de Bretagne. A road twice as wide should make positioning a lot easier for riders. Only after three flat stages and with a ramp of 6.9% over 2km could very well see legs a bit stiff and not prepared for what will be a brutally quick ascent. Even if the break stays away for the stage win, I expect riders like Nibali to make this another opportunity to take time. It’s also another big chance for Michael Matthews and Orica-GreenEDGE to make a play for the stage win.

Mechanics rejoice, TT rigs can be packed away or sent back to the service course. A stage Orica-GreenEDGE have made no attempt to hide their ambitions for, it is both the last of the time trialling seen in this year’s Tour and another potential speed hump. This stage is the opposite to stage 1 in that the route itself is not technical. However tactics will play a huge part. An undulating opening 26km sees 1.7km uphill drag at 6.2% in the final two kilometres. And I will promise you this – teams will lose significant time in those closing kilometres. Burn riders too early and you won’t have enough to drive it to the line. Don’t burn enough and you will lose too much time to the base before you even begin the ascent. BMC are the defending World TTT Champions and while I don’t honestly see Tejay van Garderen as a serious podium threat, he could find himself in yellow come the first rest day.

For any reader familiar with the movie Blood, Sweat and Gears you might remember the line from Dave Millar to Christian Vande Velde, “I told you to ride on the rest day”. Admittedly it was the second rest day of the 2009 Tour, but the point remains. Rest days are anything but. Riders don’t race, but they certainly still need to ride. Especially when the first stage back features a 15km hors categorie finish. So for all those teams that didn’t bring rouleurs to get them through to them mountains, now is the time to get to work.

To me, stages 11 to 16 should see a lot of shadow boxing from the contenders. The yellow jersey could change hands, it might not. However stage 17, again following a rest day, could once more see the undoing of a favourite. Forty years ago Eddy Merckx’s march to a sixth Tour de France was halted by Bernard Thevenet. And for those either familiar with the history of the 1975 or who watched this year’s Criterium du Dauphine, you’ll know it’s not the ascent of Pra-Loup as much as the descent off the Col d’Allos that is the real danger. Thibault Pinot would want to hope he doesn’t have a relapse of the downhill yips that hurt him in 2013 given Contador, Quintana and Nibali are all experts at descending.

Honestly I’ll be surprised if the race is still up for grabs at this point. However…if it is…a 110km stage with two hors categorie climbs (the Galibier is out due to a landslide) is the perfect stage to set up a last gasp smash and grab. Full gas from start to finish, anything could happen (think Andy Schleck in stage 19 of the 2011 Tour). The ASO designed this year’s Tour to provide the same climatic finish. And with the distance being so short and the expected tempo high, if a rider cracks he is going to lose minutes. Alpe d’Huez broke Aussie hearts in 2008 as we watched Carlos Sastre ride away from Cadel Evans and into yellow. Which nation’s dreams will it shatter this year?

I’ll finish with my pick for the winner…Vincenzo Nibali. His team look the strongest and have the know-how to make it through the first half of the race. The ASO have sold this year’s race on mountains and being one for the pure climbers. I think instead it’ll be one for the most adaptable. Whatever the case, I am looking forward to three weeks of sleep deprivation to find out. Viva la Tour!

Graham Watson - thanks again for yet another of your great pics!