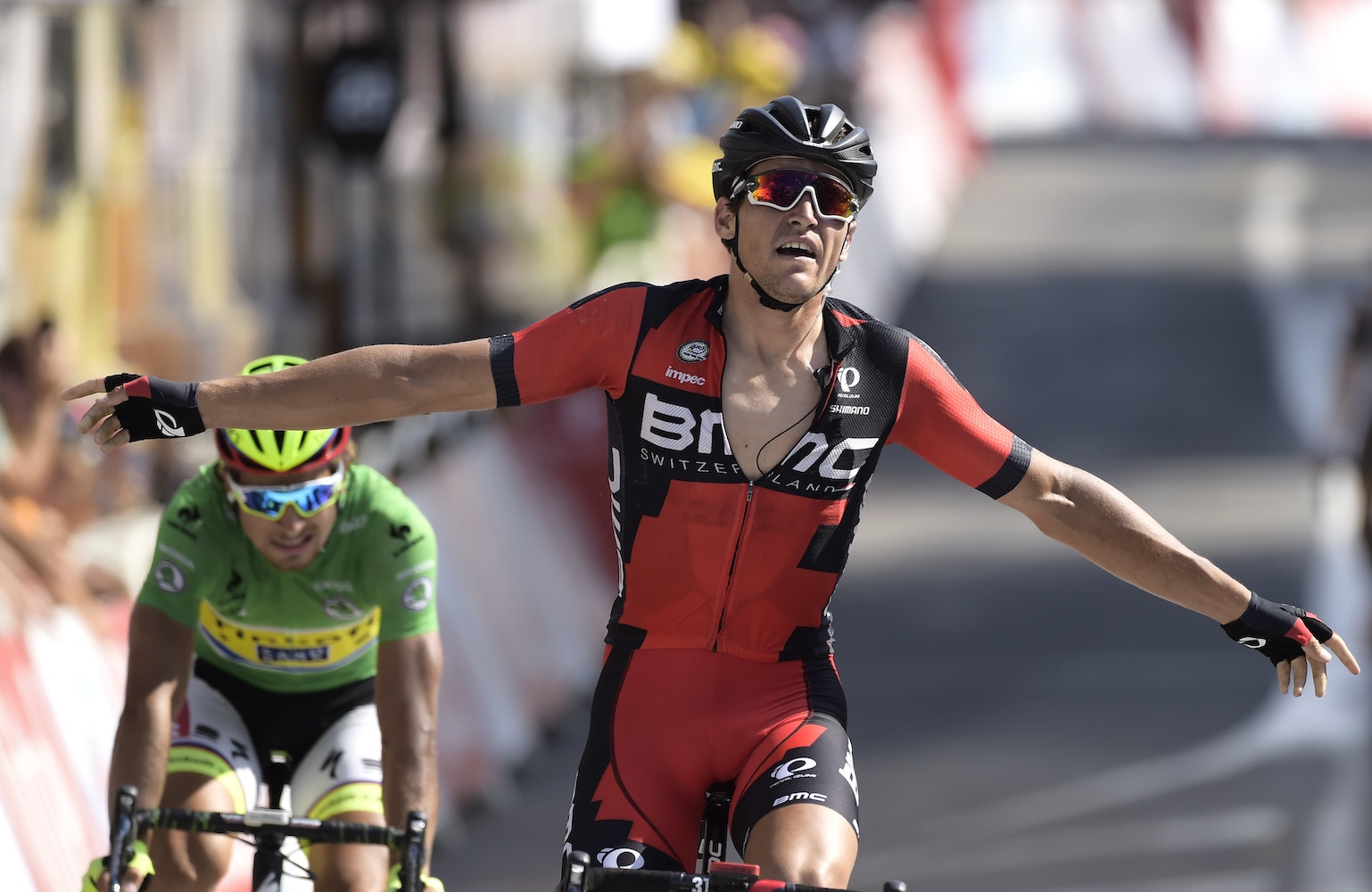 It was a traditional transition stage for the peloton on stage 13. A breakaway were let go early, but never allowed to gain too much of an advantage. The peloton timing their run to perfection and leaving the finish to the big boys.

A breakaway group of six riders, Cyril Gautier of Team Europcar, Wilco Kelderman of LottoNL - Jumbo, Alexander Geniez of FDJ, Nathan Haas of Cannondale - Garmin, Pierre-Luc Perichon of Bretagne-Seche Environnement and Thomas De Gendt of Lotto Soudal got away early and settled into the stage with a 3:30 minute gap over the peloton. Giant - Alpecin were keeping the time gap steady but were looking around for help, not wanting to deplete their stocks before the tough finish.

The first intermediate sprint was taken out by De Gendt, who was making the most of being free from domestique duties for the day. Back in the peloton, his team mate Andre Greipel picked up enough points to put him back in the lead of the sprint competition by one point over Peter Sagan of Tinkoff - Saxo.

Losing the green jersey seemed to motivate Tinkoff - Saxo. They came to the front with Giant - Alpecin and pushed the pace above 50kph, cutting heavily into the breakaways advantage.

With 70km to go the breakaway group were now onto the very lumpy part of the stage, beginning with the Cote de Saint-Cirque. The short punchy climb was taken out by De Gendt in what was proving to be a very successful day for Lotto Soudal. It was up and down from here to the finish, two more categorised climbs as well as at least four others that weren't categorised, not to mention the tough finishing pinch which averaged a 9.6% gradient for over 500m.

With 60km to go the cross winds began to pick up and with Tinkoff - Saxo forcing the pace, splits in the main field began to form. Andre Greipel was one of the riders caught out, and once Tinkoff - Saxo got word of that, it was full gas. Jean Christophe Peraud of AG2R La Mondiale and Vicenzo Nibali of Astana Pro Team continued their horror tours. Peraud crashed out while trying to find shelter from the cross winds and Nibali had a mechanical forcing him back to the second group on the road. Lotto Soudal and Astana Pro Team worked together in the second group and were able to reform with the main peloton.

With 42km to go the breakaway reached the top of the Cote de la Pomparie. A KOM point was up for grabs but it didn't interest any of the riders, FDJ's Geniez crossing first just by chance because he was rolling through at the time. The group still had a three minute advantage and it was clear all of their energy was going into staying away from the peloton. The same situation played out on the last categorised climb of the day, Kelderman cresting the Cote de la Selve unchallenged. The breakaway's advantage had been brought down to two minutes and it appeared as though the peloton were timing their run to perfection.

After sitting at the back of the breakaway for the majority of the day Nathan Haas attacked with 24km to go. The Aussie managed to get out to a 15 second advantage but was pulled back in with 18km to go.

The penultimate climb of the day was an uncategorised, four kilometre stretch that blew the peloton and the breakaway apart. The breakaway was reduced to three, De Gendt, Kelderman and Gautier, while back in the peloton, yesterday's stage winner Joaquim Rodriguez of Team Katusha was one of the first riders to be blown off the back.

The chase was on with 10km to go. The breakaway still had one minute, but now Orica-GreenEDGE and Giant - Alpecin were trying to close them down. Their advantage was cut in half with 5km to go and with a descent prior to the technical finish, the breakaway still had a 50/50 chance of pinching a victory.

With 2km to go the breakaway were screaming down the descent, still holding a 15 second advantage, and it was looking like a grand stand finish. Team Katusha had taken over in the final kilometre, and the sprinters were lining up behind, getting ready to open it up.

De Gendt was the first of the breakaway riders to go, followed by Kelderman, but within 400m of the line, they were swallowed up by the peloton. As they came together Greg van Avermaet of BMC Racing Team launched out of his saddle and started grinding up the climb. Sagan jumped straight onto his wheel with ease, staying seated and looking in control with 250m to go.

In sight of the line, both men were now out of the saddle and it looked as though Sagan was cherry ripe to blow past van Avermaet, but his attack never came. Van Avermaet dug dip and held Sagan off to finish a bike length in front. The classic specialist earning the biggest win of his career.

Thanks Graham Watson yet again for another top pic!