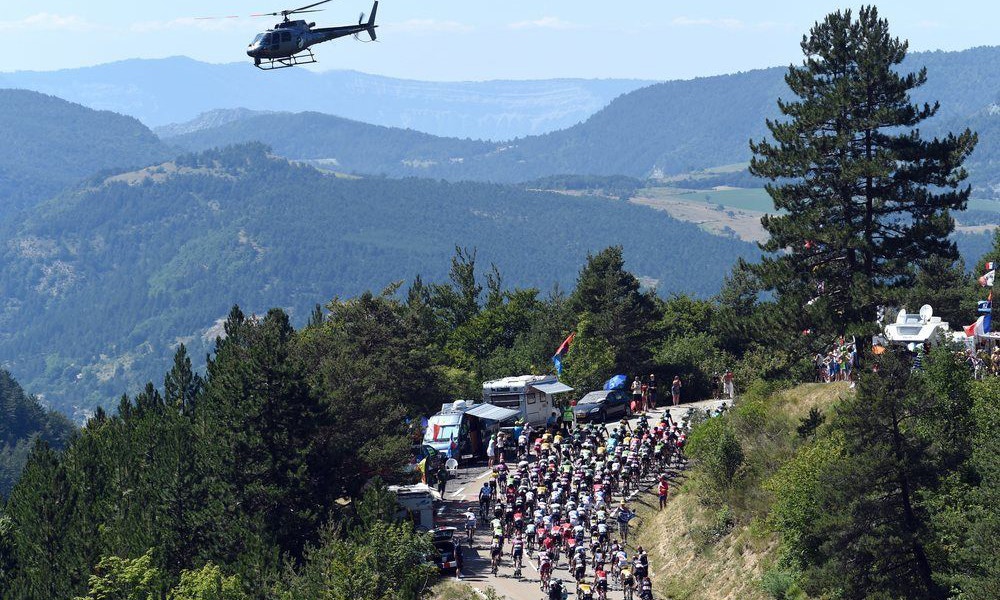 Stage 16 came down to one of the most frightening descents of the tour so far. Ruben Plaza was magnificent in the closing stages, holding off a charging Peter Sagan for the best win of his career. A huge scare for Geraint Thomas, taken out on the descent by another rider, putting hearts in mouths all around the world.

The start of the last few stages have played out a similar script. A large group of riders getting away and then splintering into what would become the breakaway for the day. Initially 29 riders went up the road, but the group was quickly whittled down to 12. The most notable riders in the group were Peter Sagan of Tinkoff - Saxo, Simon Geschke of Giant - Alpecin and Bob Jungles of Trek Factory Racing. This caused the unusual situation of 12 riders up front, a second breakaway group of 12, and then the peloton.

Despite a largely uphill profile on today's stage, the breakaway covered an astonishing 53.6 kilometres in the first hour! They would reach the intermediate sprint point shortly after, Sagan crossing uncontested in first place, virtually wrapping up the green jersey competition.

Halfway through the stage and the average speed was still over 50kph. The first breakaway group on the road had a one minute advantage over the second breakaway group and almost nine minutes on the peloton. The two breakaway groups eventually came together with 94km remaining in the stage.

The breakaway reached the Col de Cabre with a 12 minute advantage over the peloton, who had sat up and were enjoying the scenery. The 9.1km category 2 climb did little to separate the riders up front as the whole breakaway crested the climb together, Serge Pauwels of MTN-Qhubeka p/b Samsung crossed in first place and moved himself up three positions in the KOM classification. Sagan then gave his breakaway compatriots a lesson in descending. The Slovakian can lay claim to being the best bike handler in the peloton, and he was proving why on the downhill, almost running into the back of a motorbike that wasn't fast enough to stay ahead of him.

The breakaway quickly realised it would not be wise to bring Sagan with them to the finish so the attacks started in earnest, Adam Hansen of Lotto Soudal was the first to make an attack stick. Team Katusha rider Marco Haller joined him and the pair quickly opened up a gap of over 30 seconds.

The pair up front started the Col de Manse with a one minute advantage over the chasers, but at 8.9km in length and an average gradient of 5.6% they wouldn't stand a chance of staying away. Haller and Hansen were caught early on the climb and as soon as they were Lampre - Merida rider Ruben Plaza attacked and split the field. Four riders gave chase including Sagan, Geschke, Christophe Riblon of AG2R La Mondiale and Daniel Teklehaimanot of MTN-Qhubeka p/b Samsung. Those four were joined by another five riders who were able to recover and ride back to them with 3km left on the climb.

Meanwhile back in the peloton and the gap had extended beyond 20 minutes! The main group on a weekend latte ride before the final climb.

At the top of the climb Plaza had an advantage of 55 seconds over the chasers and the only question remained was if he could stay away on the descent. Sagan was throwing himself down the descent with no regard for his safety whatsoever! As Jens Voigt described, it was the stage victory or "hospital"!

Try as he might, Sagan could not pull back Plaza who risked everything for first place. It paid off and delivered the biggest win of his career. And so it was yet another second place for Sagan, making it five at this year's Tour.

Back in the peloton and Tinkoff - Saxo had begun to apply the pressure at the front of the main field. They quickly reduced the peloton to a select group of riders. Approaching the top of the final climb Alberto Contador of Tinkoff - Saxo was looking to finish off the work of his team, attacking the group. Once his attack was neutralised, Vincenzo Nibali of Astana Pro Team attacked and reached the top of the climb with a 15 second advantage going onto the downhill finish.

Tragedy for Team Sky on the downhill with Geraint Thomas taken out of the race by Warren Barguil. The Giant - Alpecin rider cut a closing right hand corner too tight and ran straight into Thomas, sending him into a telephone pole and off the course. Unaware of the drama behind him, Nibali kept driving for the line, crossing well ahead of the GC contenders. Remarkably Thomas was able to get back on his bike, finishing behind the GC group but holding onto his sixth place overall.

Love that pic thanks, Graham Watson!