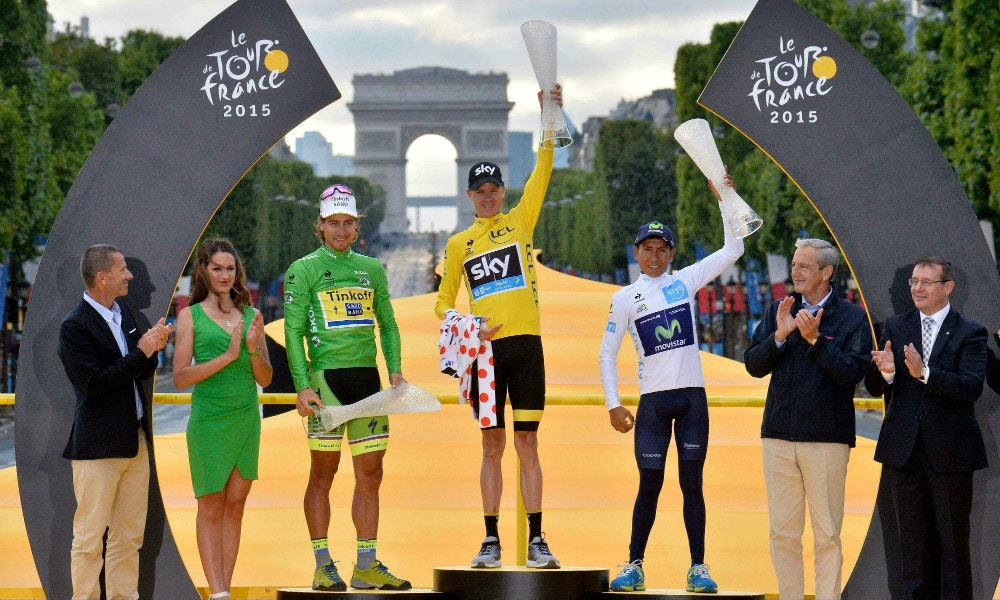 The final stage into Paris crowned Chris Froome as the winner of the 2015 Tour de France. Team Sky again proving to be the strongest team of the tour, protecting their team leader flawlessly for three weeks and bringing home another yellow jersey.

There wasn't much that could dampen Chris Froome's parade into Paris, but the French weather was trying really hard. Heavy rain fell all day and a maximum temperature of 16 degrees had the riders reaching for the rain jackets at the start of the stage. The weather was so bad the decision was made to record the final time of the tour at the first crossing of the line on the Champs-Élysées. A wise move, especially considering the amount of crashes in the women's race La Course by Le Tour de France which preceded the men's.

The 'pace' over the first 41km of the stage was pedestrian at 21.67kph. Normally as the peloton make their way onto the Champs-Élysées, the race would see a dramatic increase in pace, but unusually there was no change of pace or any attacks whatsoever. Jens Voigt describing it as 'disappointing' and a situation he hadn't seen in 30 years.

Finally, with 53km to go in the stage we saw the first sign of aggression, Sylvain Chavanel of IAM Cycling the first rider to open up a gap. Behind him, there were lots of attacks. A group of six riders got a small gap but were quickly brought back by Lotto Soudal. Chavanel too was brought back with 44km remaining, which saw another three riders attack, Nelson Oliveira of Lampre - Merida, Florian Vachon of Bretagne-Seche Envrionnement and Kenneth Vanbilsen of Cofidis Solutions Credits.

The three riders were able to extend their advantage to 25 seconds over the peloton who were led by Lotto Soudal and Team Europcar. Both groups were sitting at a touch above 50kph holding the advantage steady.

With 2 laps to go the time gap stood at 20 seconds, the peloton keeping the breakaway in sight and letting them cook their legs out in front. Rohan Dennis of BMC Racing Team was looking to finish the tour as he started it, with 12km to go in the stage he rode off the front of the peloton and joined the three riders up front. With 10km to go BMC Racing Team started to move up in the peloton, along side Team Europcar and Lotto Soudal who were still on the front keeping the pace high.

Onto the final lap and the team of the green jersey came to the front for the first time hoping to set up Peter Sagan for the stage victory. Rohan Dennis and Vanbilsen were still off the front looking super strong and not giving up their advantage. With 5km to go the Lotto Soudal train was overtaken by Tinkoff - Saxo, Sagan sitting in third wheel and in the perfect position to launch for the sprint.

The final three kilometres were chaotic at best, no teams sprint train could establish control leading to a frenzied final few kilometres. Many teams tried without success, FDJ, Giant - Alpecin and Team Katusha all trying to take charge but getting swept up almost as soon as they had hit the front.

With 2km to go their was still no organisation at the front of the race with FDJ and Giant - Alpecin fighting for control. The lack of organisation created a scattering of sprinters across the road and it was now every man for himself.

Into the final kilometre and Lotto Soudal launched their final attack which was countered by Team Katusha. Alexander Kristoff was in second wheel, followed by Sagan who had to fight off Arnaud Demare of FDJ for third wheel.

With 500m to go Kristoff opened up his sprint very early, he got an initial jump but as we have seen so many times at this years tour, Andre Greipel of Lotto Soudal appeared at the right time and was powering towards the line. Kristoff wasn't fading, but it didn't matter, Greipel had too much power and overran Kristoff with 100m to go. Bryan Coquard of Team Europcar challenged Greipel on the line but it was too late, the Gorilla confirming his status as the best sprinter at the 2015 tour despite not winning the green jersey. Peter Sagan of Tinkoff - Saxo finished in seventh position but had locked up the green jersey for a fourth year in a row.

Chris Froome and his Team Sky team mates rode across the line arm in arm, celebrating his second yellow jersey and the teams third in four years.

What was your highlight from the 2015 Tour de France?