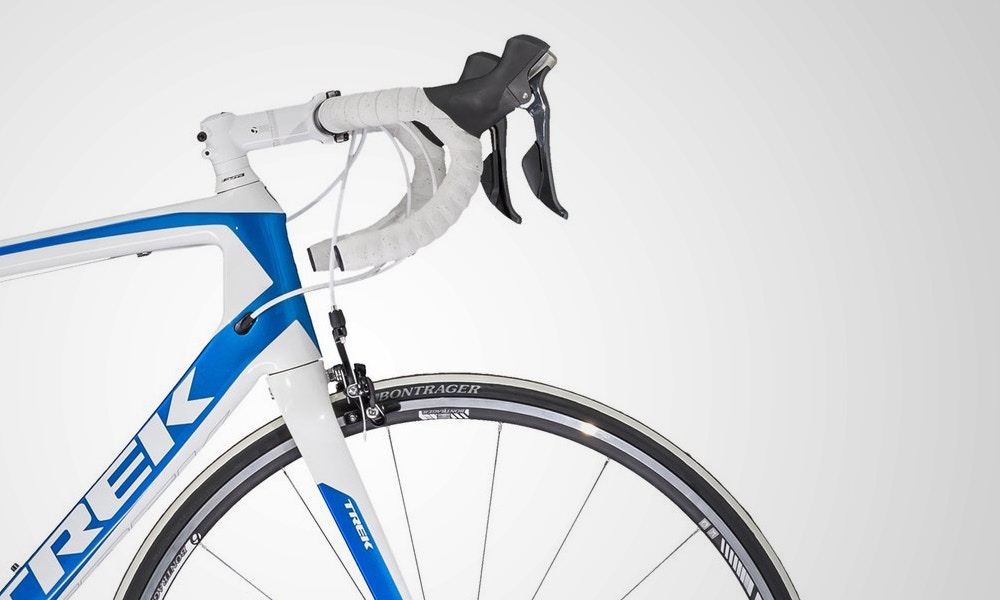 The oldies are often the goldies! We catch up with Adam Kavanagh to find out how the Trek Madone 4.5 rolls. Here's what he had to say.

The long time flagship of the Trek fleet, the Madone, has been so successful that only recently have Trek felt the need to branch out with different models; the Domane and Emonda. Both are creative anagrams of their classic ride, and highlight that even when they branch away from the classic, it’s not very far.

The model tested has been upgraded with Bontrager Aura 5 wheel set. 50mm deep, aluminium brake track, aero fairings. A versatile wheel set that holds up well in most conditions - aside from wet ones, which will add a few extra grams to your ride courtesy of holes in the rim.

With a matte black frame, blue and white highlights, deep dish wheels and the Madones racing pedigree, you could be forgiven for thinking this is ready for racing. Quite the opposite, this stead is built for comfort and function. Trek’s H2 fit is standard across their range, except for the 7 series, which is all business. The fit is relaxed, and feels more like a comfy pair of track pants you slip into rather then your Levi 501’s that you hit the town in. The head tube is looooong, which is a necessity given the relaxed frame dimensions unless you want to use excess spacers. 46mm handlebars also create stability… Stability is cycling code for slow.

The afore mentioned triple compact comes as 50/39/30, which I have always found perplexing… the ‘large’ 50 chainring is too small for sprints or fast descents, the 39 chainring is standard, and the ‘nanna gear’ 30 chainring is so small it is rarely used.

I have used the 30 twice - the first time during a three day cycling weekend at Beechworth climbing a 3km incline at 12%, and the second time up a slightly more forgiving climb, the day after a 179k ride on my TT preparing for an Ironman. Fair to say, unless you are climbing some big passes this set-up is probably not applicable – plus the barrage of abuse you will inevitably receive for having such an elementary ratio (as I have – insert sad face). Having said that, a more traditional compact set up 50/34 would be perfect for this entry level ride.

As with all Shimano running gear, the 105 performs very well. It is reliable and consistent, certainly not the aggressive shifting SRAM offer, or the laid back precision shifting that Shimano’s Dura ace offer, but it is more then serviceable – and I think the best for the price.

The ride itself is good. As an entry level bike it performs admirably, probably above initial expectations to be fair, but this bike is no evergreen… it certainly has a life span and depending upon your ability, that expiry date may come much sooner rather then later. It is not a bike for crits, or high level road racing, but it will punch out your day-to-day mileage without fuss.

The little things are done very well, the Duotrap (an integrated speed and cadence sensor) a perfect example of technology that has filtered down – imitation is the sincerest form of flattery and Giant have now added a similar offering via ‘RideSense’ and no doubt other manufacturers will ditch the cable ties and embrace this great idea.

Get the latest bike reviers here

One thing Trek does amazingly well is offer options… If you are a Trek fan you can get a plethora of frames, components and wheel sets to suit your mood at the time. As mentioned previously, getting the 4.5 with standard 50/34 chainrings instead of the triple would make a world of difference. Even going one step up to either Ultegra running gear or the series 5 would add so much to this durable stayer. That is of course, if the budget allows it.

The not so good

(Trek’s sister company for all things cycling… except the bike)