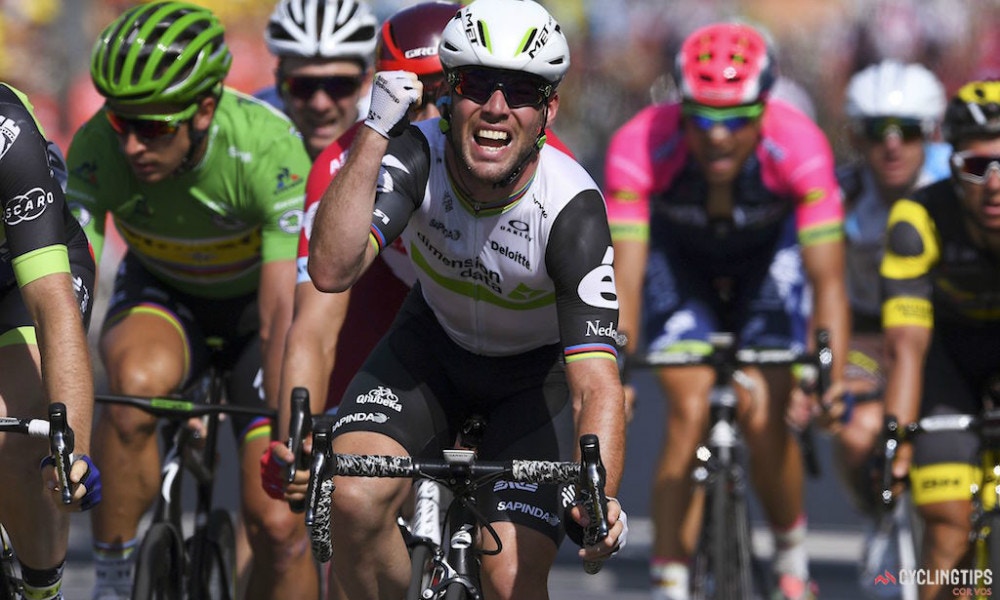 The “Manx Missile,” Mark Cavendish (Dimension Data), made it a hat-trick of wins at the 2016 Tour de France on Thursday, beating out Marcel Kittel (Etixx-QuickStep) and Tour rookie Dan Mclay (Fortuneo-Vital Concept) to win Stage 6 in Montauban.

Cavendish, 31, continues to turn back the years and with this victory he has now surpassed Frenchman Bernard Hinault for sole position of second place on the all-time Tour stage win list. As Cavendish’s Tour stage wins came fewer and far between in recent years, it appeared Eddy Merckx’s win total of 34 would be a tough feat to match for the rider from the Isle of Man. However his uptick in speed at this year’s race has put Merckx’s record back on the table.

A tricky final three kilometres, which featured three roundabouts, created a disorganized run-in and saw several different leadout trains lead the peloton into the finish. Katusha and LottoNL-Jumbo powered the peloton with Kittel and Cavendish seen a bit far down in the peloton. The two perennial sprinters showered their experience though and got into position near the front with 500 metres remaining.

Kittel launched first and Cavendish followed, the two going shoulder-to-shoulder down the center of the road. The Dimension Data rider proved to be the strongest and was able to out-kick the German to capture Tour stage win number 29.

“Today I sprinted like in the old days,” Cavendish said. “I stayed safe in the fast long run-in. It was slightly downhill. I needed to do the right thing. I agree with [Dimension Data performance manager] Rolf Aldag when he says that my return to the track has helped me take the split-second decisions. He has been part of my team’s staff almost my entire career. He listens to me, solves the problems. He knows how it works. He knows how to support someone. Him and [directeur sportif] Roger Hammond are the most formidable managers to make decisions. My wins don’t happen ‘like that.’ They come from a plan we get each day.”

McLay showed his potential on the first few sprint stages by garnering top-10 positions, but broke through on Stage 6, sprinting to a podium position. Alexander Kristoff (Katusha) finished fourth, with Andre Greipel (Lotto-Soudal) a distant 15th.

Cavendish takes over the lead in the points competition from Peter Sagan (Tinkoff), who finished sixth on the stage.

No changes occurred in the general classification, meaning Greg Van Avermaet (BMC Racing) will wear the maillot jaune on Friday as the race heads into the high mountains.

“It couldn’t have gone better I think,” Van Avermaet said. “It was a beautiful day, not too hilly, beautiful weather, no stress, and just a hard final. In the end it was really good, there were a lot of Belgian people on the road on vacation with flags and they supported me really well so it was a wonderful day for me. We are a cycling country, so it’s really nice to have a few Belgians up there in the final and a stage win with me, and the Yellow Jersey. It was one of the best days of my career, so far.”

The sixth stage of the 2016 Tour de France allowed the peloton to catch its collective breath after a lumpy stage across the Massif Central and before a tough three days in the Pyrenees of France, Spain, and Andorra beginning on Friday. The 190.5km (118.3mi) flat stage from Arpajon-sur-Cère to Montauban was the last opportunity for the pure sprinters until after the Tour’s first rest day on Monday.

The Tour had only finished in Montauban once before, in 1998, and on that occasion the great breakaway specialist of the 1990s, Jacky Durand, won out of a breakaway with a fierce finishing sprint.

Jan Barta (Bora-Aron 18) and Yukiya Arashiro (Lampre-Merida) escaped after three kilometers and built an advantage of more than five minutes before Lotto-Soudal, Etixx-QuickStep, and Dimension Data began reeling them back in, so their respective sprinters could contest for victory at stage’s end.

With important stages to come and temperatures touching 32 degrees Celsius (90F), hydration was key, and riders were constantly collecting bidons from their respective team cars at the back of the peloton.

The category 3 Côte de Saint-Antonin-Noble-Val (3.2km at 5.1%), topping out with under 40km to the finish, failed to put any of the sprinters in difficulty and the peloton, led by Thomas Voeckler (Direct Energie), brought the gap to the leaders down to under a minute.

Direct Energie did the bulk of the work on the front of the peloton after the final KOM point of the stage and brought back the leading duo of Barta and Arashiro with 22 kilometres remaining.

The riders successfully navigated the twisting final three kilometres and the teams of Kristoff and Dylan Groenewegen (LottoNL-Jumbo) fought for control of the front of the peloton under the red kite.

Etixx-QuickStep surged to the front in the final 500 metres with Kittel in tow and Cavendish locked on his wheel.

Kittel opened up the sprint, but Cavendish had the greater power of the two and won the stage by half a wheel.

“There were essentially two finish lines, one was at 12km to go and one was at the finish,” Cavendish said. “We were a little bit too far back at the first one but Mark Renshaw did a great job at 4km to go to get me just there and out of a sticky situation. I thought the best wheel to follow in the final was Kittel. It was a fast finish and with the finish line not appearing until late I knew the guys would leave it late because your instincts are not to go before you see the line. I knew Kittel’s wheel was the one to get the biggest slingshot from and with the speed of the finish, I knew if I got a good slingshot I could be going 3-4km/h faster than him before he had time to react so that’s what I did and I was happy to hang on for the win.”

Kittel could only acknowledge that he’d been beaten by the better man on the day.

“Congratulations to Mark Cavendish, he was fast and played it smart today,” Kittel said. “In this year’s finale’s it’s impossible to have a team tactic, because you always get small and narrow roads, tricky corners, and on top of all the GC teams, which are crowding in. You never know what’s going to happen and because of the crazy sprints it’s almost impossible to have a lead-out. That makes me even more proud of the boys, who managed to bring me to the front for the last part of the stage. We lost today, but for sure we will try again.”

Julian Alaphilippe (Etixx-QuickStep) kept his white jersey as the Tour’s Best Young Rider for another day, and Thomas De Gendt (Lotto-Soudal) will wear the polka-dot jersey as leader of the King of the Mountains competition into the Pyrenees.

On Friday the Tour finally enters the high mountains with a 162.5 (101mi) stage from L’Isle-Jourdain to Lac de Payolle. With 2,230m (7,316ft) of climbing on the docket, it is a stage for the climbers of the peloton. The category 1 Col d’Aspin (12km at 6.5%) comes just before the finish, as the stage finishes in the valley below the climb, not on the summit. With a seven-kilometre descent to the finish a climber with cagey descending skills could see themselves victorious in Lac de Payolle.

It was another fast and furious finish at the Tour, Michael Matthews the best placed OBE rider, finishing 11th. Matthew Hayman brought Matthews safely into the final three kilometres but as the speed increased towards 70kph, Matthews forced wide to try and break clear behind the big guns of the sprint world. Adam Yates reamains ORICA-BikeExchange’s best placed rider in 13th.

Sport director Matt white was content at the finish with the main objective for the team to get through the stage in good order ahead of the coming mountain stages.

“Our main goal for today was to come through the stage unscathed and in good condition,” said White. “We have a big three days ahead as the race goes into the Pyrenees and hits the real mountains for the first time.”

“The team rode sensibly throughout the stage and we never strayed too far from the job in hand.

“Today was the last stage for the pure sprinters until the race reaches Montpellier and it was always going to be a difficult task against the worlds fastest men. Michael (Matthews) did well to maintain his position for the finale and boxed on in the bunch sprint.”