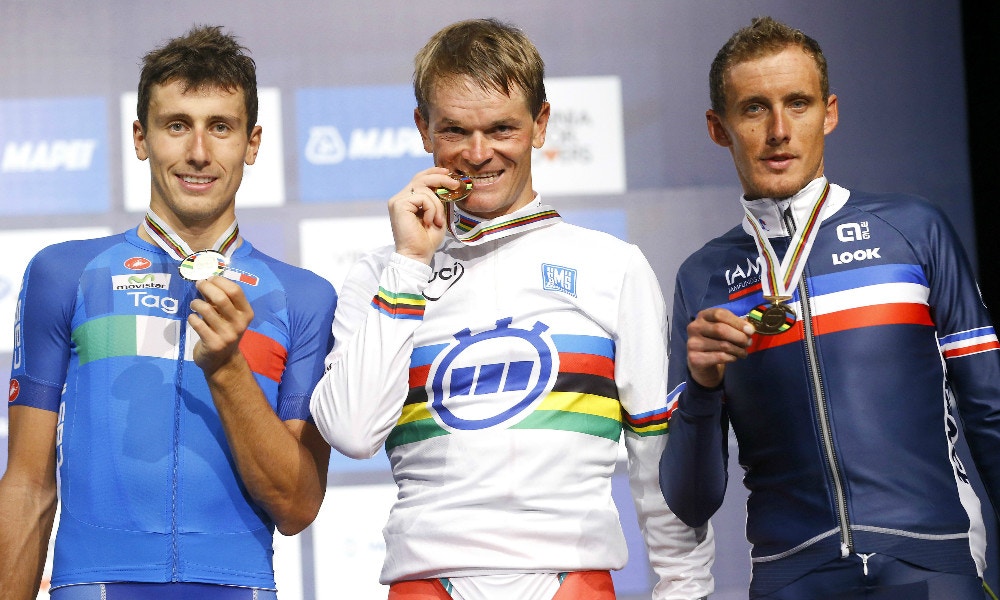 Vasil Kiryienka has shocked the cycling world by winning the Elite Men Individual Time Trial World Championship. Kiryienka produced the ride of his life to beat out some big names such as Tony Martin, Tom Dumoulin and Rohan Dennis. The Belarusian averaged an incredible 51.4km p/h over the 53.5km course and finished nine seconds ahead of Italian Adriano Malori and 29 seconds ahead of Jerome Coppel of France in third.

The win came as no surprise to Kiryienka following some significant individual time trial performances throughout the year, most notably a fourth place at the Vuelta a Espana.

"I knew it was a good course for me - it's the kind of course that suits me," Kiryienka said. "Of course Fabian Cancellara, and Bradley Wiggins were not here, but all of the other great time trial riders were here today. I think the level was very high, and it's of course great to win."

"Today was no surprise for me. I planned this with the help of my team, and it's great that I've beaten so many talented riders. I want to thank Team Sky - they have done an amazing job for me and I couldn't have done this without their support. I dedicate this win to them."

"I can't say how many days I've waited for this, and how many hours I've put in on the bike. There's so many things to consider in time trialling, so much work to do with the bike and the aerodynamics. Today it was a matter of finding my balance and setting a tempo, and I am happy I could get this win."

Kiryienka had the fastest time at every time check but was pushed all the way to the line by Italian Adriano Malori, who finished agonisingly close to the rainbow jersey. Malori started slowly, only 12th fastest through the first time check but got stronger as the course went on, providing a few nervous moments for the Kiryienka camp. Frenchman Jerome Coppel rounded out the podium in another surprise performance on the day.

The big pre race favourites all finished in the top ten but were more than a minute off the pace. Dumoulin finished 1:01 down in fifth position, his outstanding Vuelta performance potentially costing him a podium position. Despite a mid race mechanical issue, Dennis finished in sixth, closely followed by Martin in seventh.

"I had a puncture with about 25km to go. It sucks but you can't do much about it," Dennis said. "You just have to move on. Usually you lose 20 to 30 seconds. Kiryienka was on an absolute blinder. Maybe I could have been in the medals, but that's the way it goes. But Tony Martin just came in behind me, so coming in faster than him is a big achievement. He's the benchmark in time trials."

The men now have three days of rest before the 259.2km Elite Road Race on Sunday.