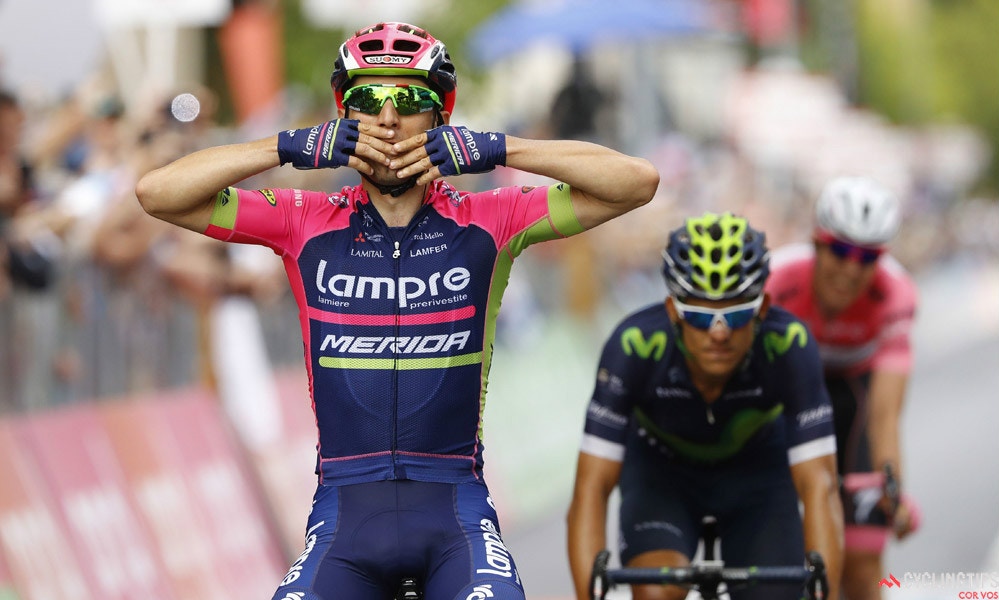 Joining a dangerous two man break inside the final five kilometres and then sprinting powerfully to the line, Diego Ulissi clocked up his second stage win of this year’s Giro d’Italia on the streets of Asolo.

The Lampre-Merida rider beat Andrey Amador (Movisar) and race leader Bob Jungels (Etixx-QuickStep), with the latter riding brilliantly on his first day in pink. The trio finished 13 seconds over a group containing the bulk of the general classification contenders, with Giacomo Nizzolo (Trek-Segafredo) leading those chasers home.

Missing from the pursuit were past Maglia Rosa Gianluca Brambilla (Etixx-QuickStep) and Domencio Pozzovivo, who had started the day 6th and 11th overall respectively. However they were delayed in a big crash inside the final hour. Both chased hard but were unable to get back on terms by the finish.

Another big name suffering was former race leader Tom Dumoulin (Giant-Alpecin), who finally admitted defeat in his battle against saddle sores and withdrew from the race.

Ulissi also won stage four and was delighted to be topping the podium again.

“Of course, my goal was to win a stage. I’ve done that, and got two,” he said. “My team chased down the break early on today. It had ten riders in it and we spent a lot of energy. It was good to catch them and set me up in the end.”

The race featured a steep fourth category climb inside the final 25 kilometres and then undulating roads afterwards. Amador attacked with 13.1 kilometres left, and was quickly joined by Jungels. They maintained a gap of just over ten seconds from there to the finish, with Ulissi able to bridge on a ramp with just over four kilometres left.

“I am actually going quite well on the climbs,” he said afterwards. “Of course, it is hard to compete with the GC guys on the climbs.

Jungels was in his first day in pink and defended the jersey with great style.

“Everybody knew there was a climb coming at the end,” he said. “We saw all the GC contenders in the front. We saw Nibali attacking in the downhill and then I knew I couldn’t let Amador go like yesterday.

“I felt good and he was pulling with me. In the end it was a pity that Ulissi got across as otherwise I could maybe have gone for a stage win. Once he was there, I concentrated on trying to keep the time gap over those behind.”

Jungels is a big rider and conceded that Saturday’s mountain stage might be too tough for him. However he should have little problems defending his lead on Thursday, with a flat stage expected to finish in a bunch gallop.

Team-mate Gianluca Brambilla will help him defend the lead, losing any chance himself of retaking pink.

“I am a bit sad because I fell,” he said. “I didn’t get too injured but my wheel was destroyed and I lost three minutes to the pink jersey. It is bad luck. I was on the wheel of Jungels [at the time] and it is good that he kept the jersey.

“I didn’t see anything of what happened after that, but if he is still in the pink jersey, it is not because of luck.”

Following the mountainous tenth stage of the Giro d’Italia, Wednesday’s stage returned to somewhat flatter terrain. The 227 kilometre race from Modena to Asolo would however include a more difficult finale, with the fourth category Forcella Mostaccin including stretches of 16 percent and topping out twenty kilometres from the line. That ramp would then be followed by testing, undulating roads.

However the peloton wasn’t in a giving mood and after just over half an hour out front, the break was back under control.

Further surges followed but the next move didn’t get established until just over 80 kilometres in. Vorobyev was at it again, and was joined by Vegard Stake Laengen (IAM Cycling) and Liam Bertazzo (Wilier – Southeast).

The peloton was satisfied to give this trio some room and they swiftly built an advantage of over ten minutes.

Back in the bunch, Tom Dumoulin (Giant-Alpecin) had decided to bring his Giro to an end. He won the opening time trial and wore the Maglia Rosa for several days, but saddle sores had made recent stages increasingly difficult and he was forced to stop.

Vorobyev took the first intermediate sprint at Grisignano di Zocco, 144 kilometres in. He was also first to the line at the next sprint at Villa del Conte, some 23 kilometres later. The peloton was chasing hard at that point and had slashed the gap down to under three and a half minutes with 50 kilometres left.

The chase continued but the bunch’s momentum was disrupted when a big crash took down approximately 30 riders, with Petrov (Tinkoff) looking to be one of the most badly hurt. Michele Scarponi (Astana), Milan-Sanremo winner Arnaud Demare (FDJ) and Caleb Ewen (Orice GreenEdge) were also involved, but were able to get going again.

With 21.5 kilometres to go the break was on the climb and Stage Laengen pushed on ahead. The peloton was only 36 seconds back and he knew it was now or never. However the Lampre-Merida team were chasing, thinking of the stage win but also perhaps trying to prevent Brambilla and Pozzovivo from being able to get back on.

Stage Laengen went through the 20 kilometre banner with just 25 seconds advantage. Carlos Betancur (Movistar) attacked from the bunch and caught Vorobyev, who had been in the break.

Betancur was himself hauled back and the bunch caught Stage Laengen soon afterwards. Steven Kruijswijk (LottoNL-Jumbo) then jumped hard just before the top but he was marked by several riders, including race leader Bob Jungels (Etixx-QuickStep).

A select group dropped down the descent, led by Kruijswijk. Vincenzo Nibali (Astana) then pushed to the front and used his well-known descending skills to push things further.

This caused another selection and he, Alejandro Valverde (Movistar) and Esteban Chaves (Orica-GreenEdge) got a small gap on the next riders. However a regrouping happened and, with 13.1 kilometres left, Andrey Amador (Movistar) attacked.

This move was immediately followed by race leader Jungels, who quickly got up to him.

Kruijswijk saw danger and set off in pursuit, but the other GC riders hauled him back. Jungels and Amador pressed on, with Jungels making the Costa Rican suffer in his wake.

With ten kilometres left the leading duo had approximately 12 seconds over a group of approximately 30 riders. This dropped to ten seconds with eight kilometres remaining, with Orica-GreenEdge and Bardiani-CSF chasing frantically behind.

The road pitched up inside the final five kilometres and Jungels led onto the climb. They were still seven seconds clear, prompting Diego Ulissi (Lampre-Merida) to jump away in pursuit.

Carlos Betancur (Movistar) also tried to go but only Ulissi was able to get across, bridging with just over four kilometres left.

Jungels was still riding very strongly and did much of the pace-setting. Ulissi then came through, while Amador held back for a while and did what he could to gather his energy before the sprint.

However that wasn’t enough to get the better of Ulissi, who came around Jungels and drove all the way to the line, landing his second stage win of the race.

The Giro d’Italia continues Thursday with a flat, fast 182 kilometre race from Noale to Bibione. Many believe this will finish in a bunch gallop, but time will tell.