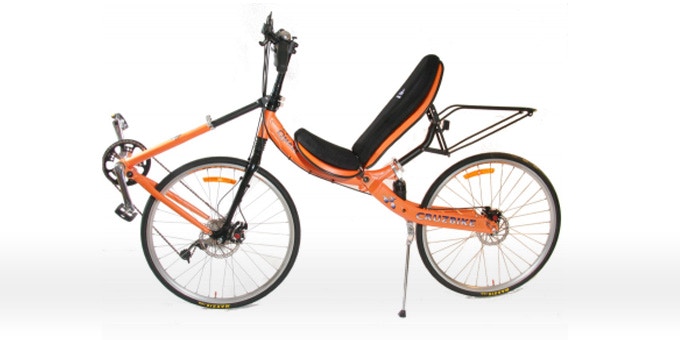 Cruz by name, cruise by nature.

Our curiosity was piqued the other day when we stepped out of the office to see this number getting assembled. Not your standard looking bike, the Cruzbike is ergonomically designed to suit the human body, rather than the other way around.

The story goes that Cruzbike’s founder, Aussie John Tolhurst, would as a teenager collect scrap metals and parts, using them to build his own style bike. Over time, the design and ergonomics behind it were finessed, and there’s now a fully-fledged Cruzbike business.

So in short, instead of sitting on a Cruzbike, you pretty much recline to the point where you are half lying down, legs outstretched and feet pedalling in front of you. It looks, well, cruisy.

We tested the Quest model, which is designed to be a traveller/commuter style bike. I could definitely see myself with a bike sack on the back (a nifty folding rack is included to make this an easily-installed accessory) smoothly making my way to the market. Rear wheel suspension helps make the ride very rancho relaxo and I quite like the old-school style bike stand.

It’s pretty easy to adjust as well, with the head tube really the only part of the bike that I needed to change for my (length-challenged) legs.

But for me, the catch was getting the swing of things. The Cruzbike is a little like learning to ride a bike for the first time. It looks easy as, but in fact that’s a little deceiving at first. To begin with, there’s the take off… You either have someone standing behind to give you a push, or you straddle the bike and do a bit of a Flindstone shuffle, gather momentum, and then fall into the seat and bring your feet to the pedals.

Then there is the steering – it’s done more with the feet than the hands, which takes a little getting used to for someone whose road bike is second nature. But I was feeling confident enough to give it a go – on a concrete surface – and I am pleased to say once I stayed in the saddle (which is more like the armchair of bike seats) for a while, I got the hang of it. And I didn’t come off.

The Cruzbike just needs a little getting used to, and then it’s a sweet ride. Indeed, it really does feel effortless in that half-reclined position; the legs don’t feel like they’re doing a heap of work and the body is in a fairly relaxed state. This is not the sort of bike for tackling difficult terrain or hills, so it’s only ever going to be smooth riding. That said, the nine gears and grip shifter give you more than enough variety should you want to dice things up a bit (it’s a 3 speed internal hub selector which gives a neat 27 speed range), and the hand brakes meant at least slowing down wasn’t a radical change for me. I just don’t know if I would feel confident enough to take this number into bustling city traffic…

That said, if you’re in the market for a sweet and smooth ride, you should think outside the square and give the Cruzbike a test drive! Check it out with yourself here!