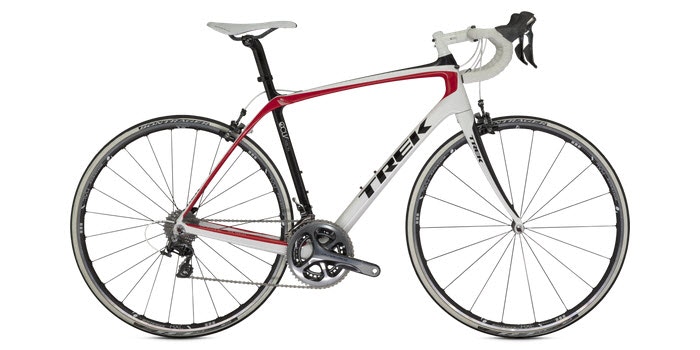 The design and engineering team at Trek have worked closely with Cancellara with the aim of creating a bike that is the best of both worlds. The domane 6.9 has the comfort of an endurance minded bike with the ability and appearance of a race bicycle.

The incredible new ‘ISO Speed’ technology located in the seat tube/top tube junction and fork helps to reduce feedback over rough terrain. “less in, more out” is what Fabian Cancellara calls it. It has been the ride of choice for Radioshack Leopard’s number 1 Classics rider ever since its introduction and within a dozen pedal strokes I immediately appreciated why.

In light of a local lack of pavé, I took the Domane 6.9 over a variety of terrain; chip-seal, train tracks and poorly leveled off roads. The result, an undeniably smooth ride. You can feel the ISO Speed working and providing real comfort – without any loss of control. The first half an hour was actually spent thinking I did not have a fully inflated tyre, such is the compliance.

What effect though does the vertical compliance have on power transfer and horizontal stiffness? Out of the saddle I could ever so slightly feel the ISO Speed in action. However the Domane was still horizontally stiff enough for me to not notice any torsional movement, with the occasional ‘dipping’ of the rear actually keeping the back wheel firmly planted. Not once did it skip on either a flat road or uphill sprint. Which when you are putting the power down, is certainly appreciated.

Climbing is also an ease with Domane. The compact chainset certainly helped – however what was even more noticeable was the weight. Or lack thereof. Complete with pedals and one bidon cage, my 6.9 came in at a coincidental 6.9 kilograms. For a bike with a 56cm top tube, that is impressive.

Geometry of the Domane is Trek’s Endurance Fit, which caters for a more "relaxed" fit. The 6.9’s groupset is the new Dura Ace 9000 11 speed. Shifting is flawless. A lot of this can be attributed to design of the new groupset, however the cable routing of the Trek also plays a vital role. It not only helps facilitate smooth shifts, but is also silent. When you have a bike that is engineered to be ridden over rough terrain, this is a critical characteristic that has not been overlooked.

The Bontrager RXL Tubelss Ready wheels, tyres, stem, saddle and bars were all also impressive. Carbon rails on the saddle helped smooth what was already a plush ride and the wheels both rolled well and not able to be flexed in any of my sprint efforts.

Whether you are an enthusiast rider targeting the next big sportive or a weekend racer, looking for that bit more compliance from your race steed, the Domane is certainly worth the ride.