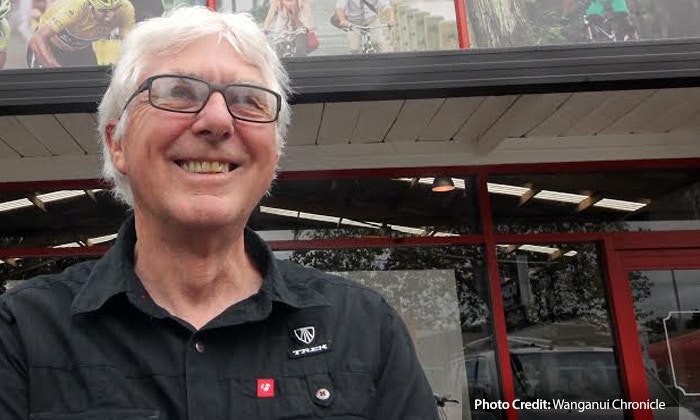 Ron Cheatley – a man on the go.

If you’ve got nowhere to go, you’ll certainly get there.

It’s a well-used line by Ron Cheatley, and speaks volumes as to why he very quickly became one of NZ’s greatest cycling coaches. No-nonsense, not one to suffer fools, a ‘do-er’ with exemplary work ethic and a master organiser, cyclists under Ron Cheatley’s wing knew not to muck around if they wanted to keep their coach on-side.

And why wouldn’t they – he prepared five Olympic teams for competition (only four of which were realised due to NZ’s boycotting of the Moscow Games) and coached Gary Anderson to win the country’s first ever cycling medal, a Bronze in individual pursuit at Barcelona in ’92.

Ron is cut from the cloth that believes good old-fashioned hard work reaps rewards. That said he was an early adopter of the role science could play in sport, something that today is par for the course, but in the 70s was innovative thinking. Even so, in Ron’s opinion the world’s best sports science tool is a stopwatch. Although he respected and requested contributions from sports scientists at the time, it was ultimately Ron who chose what to do with the information, and not the other way around.

But let’s go back to working hard…

Ron was very clearly a coach who led by example. In the 21 years he coached, Ron never actually went professional. These were the years when money in cycling was scant, and Ron found himself doubling as a travel agent, financial manager, sponsorship organiser, PR agent and all-round trouble-shooter. Incredibly, he also found time to coach – not just males, not just females, not just endurance cyclists and not just sprint cyclists... The whole elite kit and caboodle. On-top of this Ron managed a wholesale business specialising in engineering supplies (and which, surprise-surprise, expanded under his management from one branch to five), plus launching Cycle Sport New Zealand, an importing and wholesale company. On-top of this Ron also held two-part time jobs in the early years so that he could ‘put enough money away in the tin’ to look after his family (four children) during the periods he was overseas coaching and not actually earning an income.

Needless to say you’d have been a brave, or foolish, cyclist to have complained about workload whilst under Ron’s tutelage. Ron’s key to keeping afloat was all in time management. He was, and remains, a fastidious planner. Yet when asked about the golden chalice, that special talent that makes a good coach a great coach, Ron’s answer is quick – communication. The key to all success, communication brings motivation and motivation gets you where you need to go.

It’s a philosophy he has held his entire life, and has proven beneficial not only as a coach, but as a business owner (yes – he bought out the wholesale cycle company and reinvented to not only include a retail arm, but to supply goods to approximately 90% of the country’s bike stores). One of Ron’s sons Bevan represented NZ as a junior and now at 39 years of age still races each week and works with his dad. Ron’s other son Dayle has followed in the early footsteps of his dad and is now the national coach of Cycling New Zealand. With a laugh of relief Ron confirms that neither of his daughters ever showed any interest in the sport!

Medal tallies aside, one of Ron’s proudest achievements is the relationship he’s maintained with literally hundreds of cyclists, many of whom now race at Masters level. That, and his memory of the 1990 Commonwealth Games, when a representative from the Australian team declared to the world’s media that they would clean the floor (or track, as was the case). Ron printed copies of the newspaper article and pinned them in each of his athletes’ rooms. It proved impressive motivation; the Kiwis sent Australia home with their tails between their legs.

The Aussies should have known – if you’ve got somewhere to go, and you’re up against Ron Cheatley, you should probably keep mum.