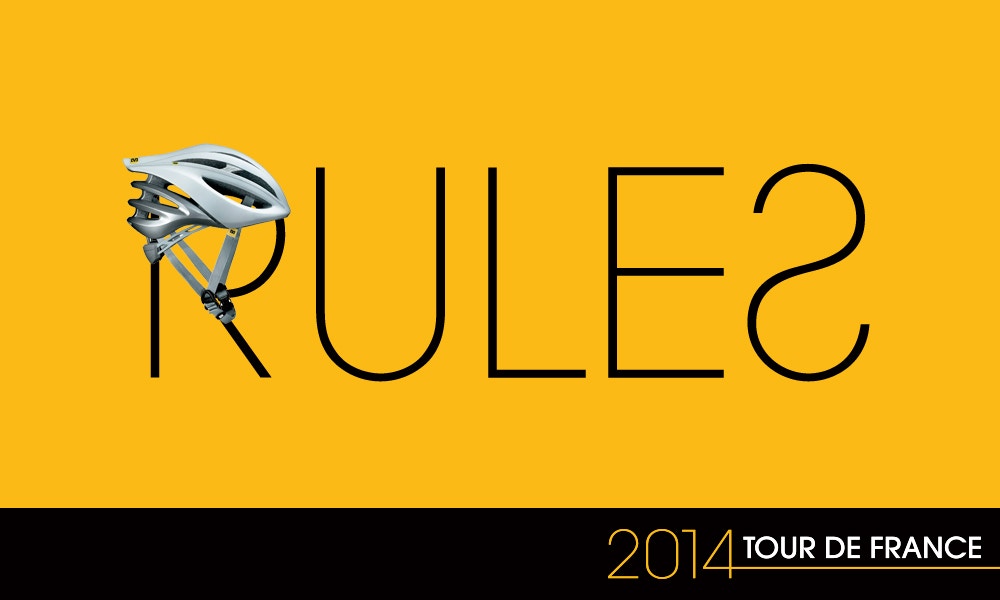 The history of the Tour de France shows that rules weren't always followed, but things have changed! We look at some of the rules now in play... You might be surprised by a few!

1/ Looking after the noggin

In contrast to the otherwise fairly - how should we say - ‘laissez-faire’ approach many European countries take to riding with a helmet, it is compulsory at the Tour de France. Up until 2003 there was no ruling about this, but then Adrei Kiviliev came off his bike during Paris-Nice, hit his head and died just a few hours later. It was the tipping point – from that year on helmets became mandatory.

It’s not just the same jerseys that must be worn by each member of a team. They have to also wear uniformed shorts, socks, shoes, gloves and helmets. Exceptions are of course the Tour de France jersey winners of each stage and national/world champion jerseys.

The defending race champion (which until Stage 5 was Sky’s Chris Froome) is classified as #1, with each of his team mates assuming a ranking up to 9. Teams are required to register their leader (and their cyclist with the greatest potential of winning the Tour) with the lowest number of the team, and then place him at the beginning of any official rider list. All other team members are then listed alphabetically.

Before each stage begins, all riders are required to pass through a ‘signature registration area’, where they effectively sign in. Riders are fined for failing to sign and can even be disqualified (although there are apparently exceptions granted).

Each stage has designated feed zones in which team representatives hand out all number of nutritional supplies, as well as fresh bidons. Riders are also able to receive supplies via their team managers’ cars or motorcycles, but there are sub-rules around how this is done.

Aside from the caravan, there are also team cars following the Tour for the entire duration of the stage. The primary vehicle leading other cars must be driven on the right hand side of the road and each car must have a radio that is following the Tour’s frequency. Team vehicles cannot pass a race management vehicle without permission and they must abide by the road rules of the country in which they are driving.

7/ Spills at the end

Riders who come off in the last three kilometres of any stage assume the same finishing time as the bunch to which they belonged before their spill. The exception being time trial stages and summit finishes.

8/ Sharing is caring (within reason)

Riders can share each other’s food, drink and/or bike accessories but when it comes to exchanging wheels or bikes, riders can only borrow from team mates.

Riders can receive technically assistance, but only if they are behind the peloton, on the right side of the road, and stationary.

Believe it or not, but slipstreaming (being pulled along by a vehicle) and taking hold of a vehicle is forbidden. Riders who do so may be fined or indeed excluded from the race.

Teams and each of their members (including riders, supervisory staff, trainers, doctors etc) are not able to take part in sports betting ventures relating to the Tour de France. A further extension of this – all teams and their members must promise not to share with a third party privileged information (that is not public) obtained through their work with and in the Tour de France.