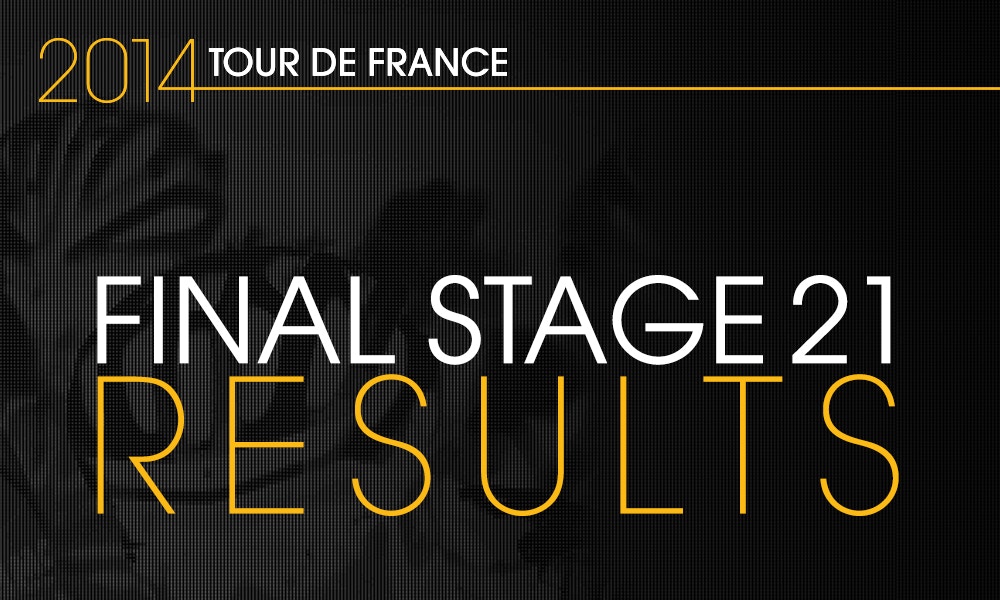 It's over! We're elated by today's Stage, but a little down that 21 days have finished so fast! Sure the leaderboard is a fairly predictive one, but that didn't stop Sunday delivering a brilliant day of racing - for the men and women!

The colour yellow is no doubt now like second skin for Astana’s Vincenzo Nibali, who has officially now claimed General Classification victory in the 101st Tour de France.

“… I anticipated that no feeling of happiness could be compared to what we feel on the podium at the Champs-Elysées. It's even more beautiful than what I could imagine. I want to dedicate this victory to my team and my family. Hadn't I had my wife Rachele and my baby girl Emma on my side, hadn't I grown up as a young cyclist with parents like mine, I'm not sure I would have made it to here. I have felt such a strong emotion very few times in my life. So I say thanks to the Tour, thanks to all the French people and thanks to everyone.”

The Stage itself went to German sprinting-sensation Marcel Kittel (Giant-Shimano) who served a powerful surge to the victory line just as he did in 2013. The 21st Stage win marks a 2014 Tour total of four for the speed superstar.

The final Stage in this year’s Tour showed the good sportsmanship often associated with the grand race. A stack involving several AG2R riders, Jean-Christophe Peraud included, resulted in Nibali calling for the peloton to wait.

Come the remaining 5-km to the finish line and the sprinters started to jostle themselves in preparation for a group finish. Omega-Pharma – Quickstep did a good job of controlling the peloton in favour for Aussie Mark Renshaw, Russian Alexander Kristoff on his wheel. Their work forced Giant-Shimano’s hand, and briefly it looked like Kristoff would indeed take to the victory line first. But Kittel dug deep to deliver the goods.

2014 has delivered plenty of reasons for the French to celebrate. French team AG2R has topped the leaderboard at the end of the 21 days, whilst French cyclists Peraud and FDJ’s Thibault Pinot made local history, ending a 30-year drought to deliver two Frenchman to the GC podium.

Richie Porte from Team Sky was the best placed rider in this year’s GC, coming 23rd, followed by Michael Rogers from Tinkoff-Saxo in 26th. Orica-GreenEDGE placed 20th in the team results.

It was a special day not just for the men who have battled this year’s Tour, but also for 20 teams of elite female cyclists who raced the historical 90km La Course, which also finished on the Champs-Elysees just hours before the men.

The first Aussie to finish was Lizzie Williams in twelfth place, whilst Sweden’s Emma Johansson came 8th for Orica-AIS. BikeExchange mate Rachel Neylan showed she is coming back to form, placing 35th in the elite field.

It’s been a brilliant 21 days. Aussies and Kiwis might be looking forward to a bit of a sleep-in tomorrow, but there’s no denying this year’s Tour de France has been every bit the incredible, unforgettable ride.

Thanks for following on BikeExchange!

Visit everything bike on our blog