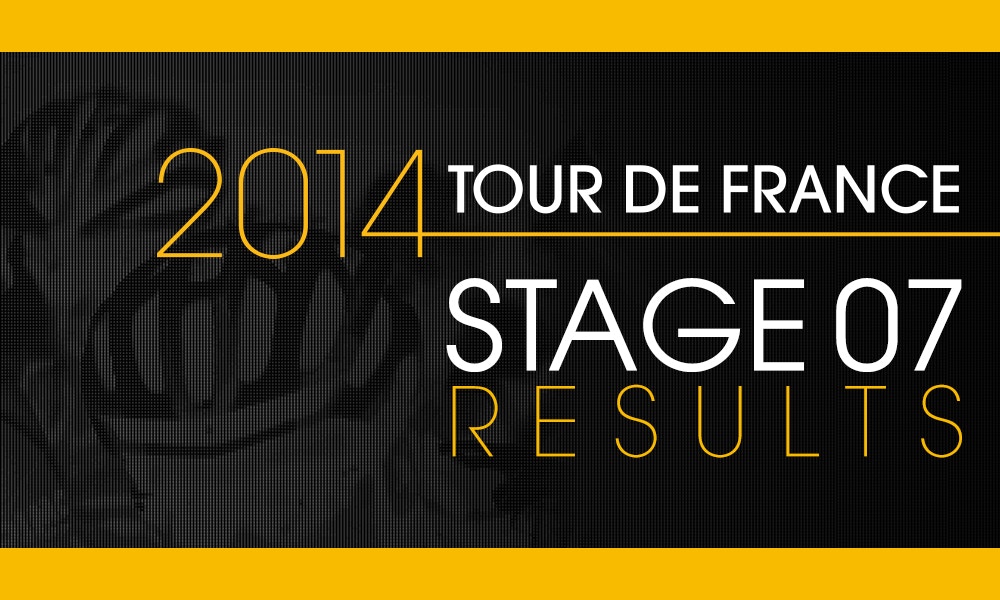 What's the story behind the jersey colours? Find out here

Green jersey wearer Peter Sagan and his Cannondale team wanted a win bad today, and they worked solidly from the pointy end of the peloton for 234.3km to get it. But their efforts were quashed at the very end by Omega-Pharma – Quickstep’s Matteo Trentin, who has secured his second Tour de France stage win in as many years.

It looked all but in the bag for Sagan, who was battling Van Avermaet (BMC) when the peloton finally caught up at one of the last bends. Porte (Sky) took the lead for a few seconds before Kwiatkowski forced him to surrender, and in doing so paved the way for his leader, Trentin to move up.

The Italian’s win will hopefully now put an end to a string of rotten luck for the team, which has suffered from chain drops, punctures, crashes, blow ups in cross-winds and wrongly timed attacks since their leader Cavendish fell down – and then out – in Stage 1.

It was by no means a comfortable win. No more than a tyre depth and photo finish separated Trentin from Sagan. OPQ captured Trentin’s reaction later on their website:

“Cycling is beautiful because anything can happen, and it was so close I couldn't celebrate until I knew for sure.”

Today was the second longest day in the saddle for riders on this year’s Tour, with several bites (including a 1.3km 8% just 5km from the finish) thrown in for additional good measure. As a result, it was never going to be a day for the sprinters. But efforts for the intermediate sprint today appeared ho-hum at best, with grit to garner those extra points lacking somewhat; Martin Elmiger from IAM ended up the most competitive, collecting the 20 for his team. The Swiss cyclist was then part of a break away until about 18km from the finish, when he was caught by Simon Yates and his Orica-GreenEDGE bunch. Special mention goes to OGE, who worked to get their leader Gerro into fifth place in today’s stage.

But it turned out to be a bad day for many.

After Boom’s victory over the Cobbles, Team Belkin Pro Cycling today lost its first man when Stef Clement came off and was forced to withdraw, as did Darwin Atapuma from BMC (involved in a nasty crash in the last 20km) and Trek’s Danny Van Poppel (the youngest rider at this year’s Tour – a mantle now held by Yates from OGE).

Got the Tour bug? Get onto our blog for more!