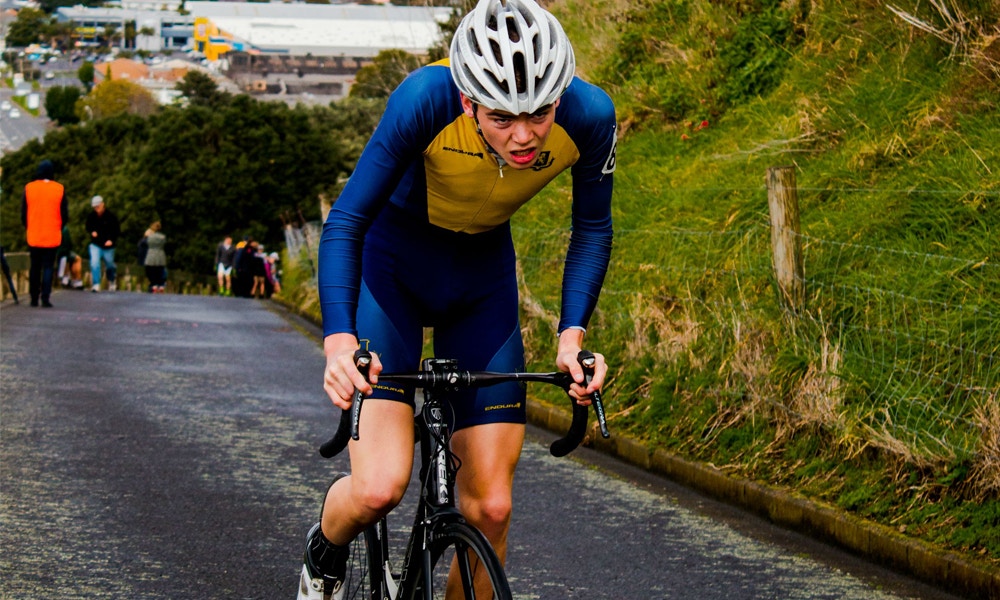 When Ben Madsen started high school, riding was no big deal; it didn’t even register on his radar.

Oh – how times have changed. As Ben puts it best, he now lives and breathes everything to do with riding.

Now 17 years old, Ben has been a part of the Auckland Grammar School cycling squad since Year 9. He just kind of fell into it. We caught up with him to find out just how badly the bug has bitten him!

Firstly – what bike do you ride, Ben?

Why do you love riding?

It’s such a good social sport and it’s pretty easy to get into. All my friends ride – not just guys from Auckland Grammar but students from other schools as well.

So your competition foes are friends?

For sure – we’ll race each other but then we’ll go out and train together and just get some really great rides in as a bunch.

Cycling is a school sports winter code, so what do you do in summer?

Yeah it’s a winter code for school, but summer is when things really get going in the clubs, so I ride and race year-round.

So how much riding do you actually do?

I usually ride six days a week and depending on the training programme I will be doing anything from 250km to 450km a week. What races are on your radar?

The Tour of Hawks Bay and Tour of Te Awamutu are big events, as are the Auckland Team Time Trials and Auckland Individual Time Trials. I really enjoy time trials.

What would you be doing if you weren’t on a bike?

Before I got into riding I was playing rugby. But I find riding more competitive and more challenging. That said if I wasn’t on the bike then I’d probably be playing rugby.

What have been your riding highs?

What about any riding lows?

Actually just the other week two of us came off during a bunch ride. The road was wet, wheels hit a curb and we just went down. I lost some skin and broke my collarbone clean in two. I have a plate in it now. I can ride, but I can’t race until the plate comes out.

How do you go balancing school?

At the end of the day, school takes priority. But I find the balance fine to manage.

So will you up the riding ante once you finish year 13?

Probably the opposite. I hope I will get into bio medicine at Uni so I think if anything, ride time will be cut down.

You are so dedicated to cycling right now, and you’re putting in all this effort. But at the same time you’re ultimately going to be prioritising your education. Does that make it hard to get motivated for some of the rides?

Not at all. I figure now is the perfect time to be doing this. While I’ve got the hours in the day I may as well be spending them doing something I love like this.

It’d be great to get over and do some racing in places like New Caledonia. One day of course I’d love to take the bike over to France and do some of the classic Tour stages. But I don’t know when that will happen – maybe in a few years, maybe later in life.