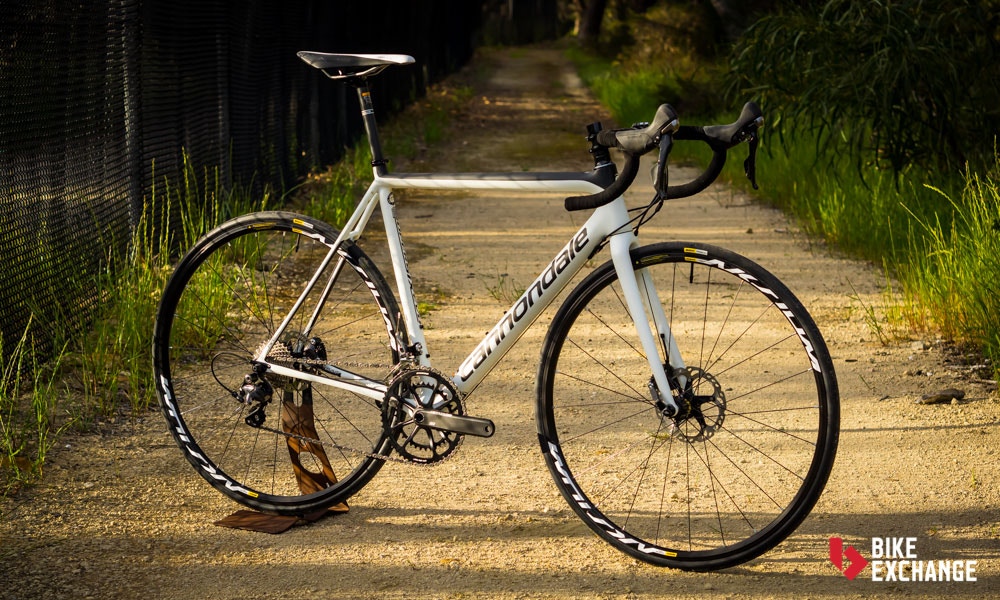 Endurance road bikes have long been equipped with disc brakes, but only recently have we seen the introduction of disc brakes onto performance road bikes. Cannondale's aluminium CAAD series has featured disc brakes for a over a year, and now it's the brand's top-tier performance bike, the SuperSix EVO that gets the disc treatment for 2017. As well as offering the usual line-up of rim-brake SuperSix Evo bikes, two disc equipped models will be available in 2017; a Hi-Mod and Carbon version, both equipped with mechanical Shimano Ultegra drivetrain.

In what is shaping up to be a battle of carbon vs aluminium, for performance disc road bike supremacy amongst the Cannondale fleet, CyclingTips’ Australian tech editor Matt Wikstrom will be reviewing both the newly released SuperSix Evo Hi-Mod Disc Ultegra and the CAAD12 Disc. We were able to get our hands on both bikes for a brief moment to get an idea of what each bike is all about before Matt’s full review is released on CyclingTips. If you haven't already, be sure to take a look at the first impressions of the CAAD12 Disc. In 2015, we saw the first sighting of disc brakes in the WorldTour peloton and towards the end of the season, the UCI announced a trial of disc brakes for the entirety of 2016. Bike manufacturers for a long time had been experimenting with disc brakes on endurance road bikes but this announcement signified the next major development of road bikes. The push for disc brakes was embraced and went full steam ahead as manufacturers started equipping their versatile lightweight bikes with disc brakes first, with aero bikes soon to follow. Manufacturers started to reveal experimitions with frame design, wheel width and weight limits after reaching close to the peak of innovation with UCI restrictions. Despite a dramatic and highly publicised injury at Paris -Roubaix to Etixx-Quick Step rider Fran Ventoso, the (disc) wheels were in motion and we started to see performance road bikes with disc brakes accessible to the general public. Disc brakes in the pro peloton are back on the agenda for 2017 and so the disc equipped SuperSix EVO couldn't come at a better time. There are two disc SuperSix Evo frame types available; the top-tier 'Hi-Mod' and the more entry level 'Carbon'. Matt is testing a 54cm 'Hi-Mod' SuperSix EVO, which is Cannondale's top of the line frame – not including the special 'Black Inc' series which hand picks the very lightest off the production run, and then treats them to an ultra-light coat of paint. The frame uses high-modulus carbon fibre that produces one of the lightest and stiffest on the market, certainly good enough for WorldTour standards. The addition of disc brakes is said to add less than 150g of weight to the frameset compared to the impressively light rim-brake version. Not having a separate aero and lightweight bike, Cannondale have added an element of aerodynamic performance to the SupersiS Evo frame using what they call 'TAP' (Truncated Aero Profile) tube shapes in the downtube, seat tube, seat stays and fork. Another technology called 'Speed Save' is used, allowing small amounts of flex at key locations in the frame to add compliance. It's clear that Cannondale aim to tick all the boxes for the SuperSix Evo. The SuperSix Evo Disc uses a thru-axle up front and a quick release at the rear. As a result, the Mavic Aksium Disc wheels feature 100x12mm thru axle on the front and 135x9mm quick release at the back. The rotors too are different, with a larger 160mm rotor up front for stronger braking, and lighter 140mm version at rear. Mavic's own 25mm Yksion Elite tyres wrap the wheelset. The drivetrain is the ultra reliable and durable 11-speed Shimano Ultegra mechancial. As with most of Cannondale's performance bikes, the signature HollowGram Si and SpideRing crankset features, it's in a modern mid-compact 52/36 ratio paired with an 11-28 cassette. To control the Shimano Flat-Mount hydraulic disc brakes, the regular Ultegra shifters have been swapped out for Shimano RS685 Hydraulic shifters which add a little bit of bulk to the hoods. The bottom bracket is Cannondale's newer BB30A pressfit, which simply places the left bearing out 5mm wider than the original standard. The whole package is rounded out with many of Cannondale's own components including; C1 Ultralight compact alloy handlebars, 'SAVE' Carbon seat post and C1 Ultralight alloy stem. Fi'zi:k provide the saddle and bar tape in the form of the Arione R5 and Microtex Superlight Classic respectively.