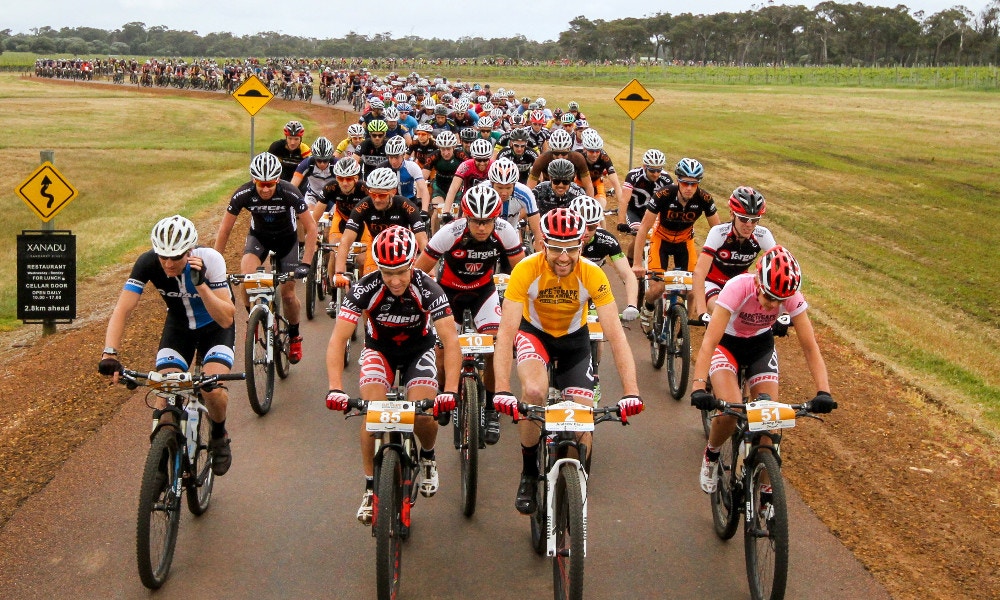 Cape to Cape needs no introduction. A 200km plus, four-day mountain bike event, Cape to Cape is Australasia’s biggest MTB multi-stage endurance race. Designed to link up the best mountain bike trails in the South-west of Western Australia, the annual race takes riders from Cape Leeuwin to Cape Naturaliste.

The 1,200 capped field of competitors across all levels of skill and experience race past iconic Margaret River vineyards, through farmlands and forests and past coastal vistas that make holiday brochures come up a treat.

They take on single tracks, fire trails, sand, river crossings, tarmac; anything course designers can throw at them and that puts this pristine part of the world – and its awesome mountain biking trails – on a pedestal.

Just over a month out from this year’s race we touch base with some of the riders who’ll be at the line-up. We find out what training they’ve been doing to get to this point, and whether they think the Cape to Cape is all it’s stacked up to be… “I prefer to ride kneeling down rather than on a recumbent trike. It’s the closest I can get to feeling the way it used to when riding a bike.”

30 year old Andrew was just getting seriously into mountain biking when a riding accident in QLD late 2008 impacted his T10 vertebrae. Or in Andrew’s words, “made my vertebrate look like it had exploded”.

Following his spinal cord injury, Andrew turned to wheelchair basketball, where he made the State and Men’s Australian Squad and represented Australia overseas over the years. But recently he’s turned to the trike, and has become an almost one-man advocate group for developing and promoting this niche sport (he is the founder of Break the Boundary, a not-for-profit website based resource that advocates for accessibility and inclusion for people of different abilities in off-road hand cycling). “The adventure of hand cycling in MTB events gives me a real buzz. I like to push myself on terrain and distance.”

I ask Andrew if his spinal injury has made him a more cautious, or more risk-taking cyclist.

“I am definitely more cautious before I ride than I used to be. If for example I now sustain a seemingly innocuous injury to my legs, it will invariably mean I end up in hospital, so I have to be careful about wearing extra padding and that kind of thing. On this trike I have a lower centre of gravity and wider wheelbase, so I can hit corners a lot harder than other cyclists with minimal risk. Sometimes it’s a struggle for support riders to keep up! But it’s ultimately about the safety of all riders, and not just me”.

To that end Andrew doesn’t complete the precise same Cape to Cape course as other riders – for example he will detour around areas that might be classic bottle neck zones or areas too dangerous for a handcycle to go through during a massive event. Even though he covers over 80 per cent of the course, you could argue he’s working a heck of a lot harder than anyone else… See also: Great advice for building your base

With three wheels, a metre’s width and extra welding, Andrew’s trike sits at around the 25kg mark – not a bad physical feat given it’s his upper body doing all the heavy lifting and propelling. Andrew’s been averaging three solid gym sessions a week, two days of hand cycling and one 20-30km ‘hard slog’ race pace session to get himself ready for this year’s Cape to Cape.

The last two years were all about the ‘big’ factor – Cape to Cape was, in Andrew’s mind, a huge event, and that’s what attracted him to it. He was looking for extreme, he was looking for local, he was looking to raise awareness for his new calling in life. And perhaps most importantly, he wanted to be included amongst ‘normal’ cyclists and show them all that if they could do it, he could do it, too.

It’s a different tune in 2015. He’s a man who’s mellowed. Sure there’s still a deep-seeded drive to push and make a lot of noise to raise the off-road hand cycling profile in Australia, but he doesn’t have to prove anything.

“There is nothing to be ashamed of or embarrassed about. I work within my capability. Even if I am the last person to cross the line, I will be proud”.

“My husband did the Cape to Cape last year. Upon completion he turned to our three boys and said ‘do you think mum could do it?’ They thought about it for a moment and then confessed that it was ‘probably a bit too far for mum’. That was the clincher - I would have registered there and then if I could have”.

It almost beggars belief that Emma George’s boys ever doubted their mum. An Olympic and Commonwealth Games athlete, Emma set 12 pole vaulting World Records in a row before retiring from the sport. Perhaps in her sons’ defence, Emma’s forte had always been in power, not endurance. Still – making such an admission is surely waving a red rag to a bull? Emma doesn’t doubt for a moment that she will finish this year’s Cape to Cape, her first attempt. But she’s taking a fairly humble stance for the time being.

“I’m going to rely on a good recovery system to get me over the line,” she confesses. Emma admits she’d like to have a lot more training under her belt right about now, but a new online business venture and three young boys have meant limited time in the saddle. “If I look at my Garmin I think I’ll find I’ve done something like ten rides since I bought my first MTB earlier this year. But it’s just going to be awesome to get out there in the bush and have four days of me time!” See also: Aaron Bleakley is half the man he used to be

Emma’s first taste of Cape to Cape was last year supporting her husband. It was an enjoyable turning of the tables for someone who’s used to getting supported at sporting events. Although she doesn’t think her skills base is anything to write home about just yet, she’s conscious that the real test will be backing it up day after day.

“Pushing hard for one day and recovering is fine, but to have to turn up to the start line and do it again for the next three days is really going to test the mettle. I’ll be defaulting to my old habits of ice baths, quality nutrition, massage and rest!” Will this be the start of a lot more news we hear about Emma and mountain biking?

“I’m giving the Cape to Cape a go because my friends told me we’re getting old and we need to get fit. And besides, as one of them added, you can mountain bike some stages on internal fortitude alone”.

You might very well be able to mountain bike a stage on internal fortitude alone, but as Isaac Rinaudo found out when he recently completed 64km in Dwellingup 100, it makes for a tough day in the saddle if you’re under cooked.

Isaac is new to mountain biking. All of one race new. In fact, until Dwellingup he’d only gone on a couple of rides on the ‘old clunker’ before his new mountain bike arrived and was christened in his first race.

But a mere lack of preparation will not deter this police officer, who’s based in Leonora and now uses a single, sandy, corrugated track for his training rides. Since Dwellingup, Isaac’s started to average three rides during the week; two at around 25km and one at 50 to 60km. Although he’s new to life on the bike, he’s already given the culture a big tick. During Dwellingup 100 he was really taken aback – for all the right reasons – at just how friendly fellow riders were. If anyone was in trouble out on the course they’d be asked by several passing competitors if help was required. Isaac himself was only too happy to grab a few moments of respite as he handed his Leatherman over to someone having mechanical issues.

So he’s looking forward to experiencing some of that spirit again at the Cape to Cape, but also feeling the satisfaction of completing his first ever endurance event. He might not be getting any younger, but Isaac’s definitely getting fitter.

“It’s the first time I will race Cape to Cape. I am really looking forward to the social side of things given so many of our clients have entered. I am pretty sure after racing I will find myself at Giant helping out with bike maintenance and whatever else needs to be done, though…!” Seasoned mountain biker Andrew Lumley is probably going to need a concentrated recovery period after each day’s racing. He will not only be racing each day, but through his work at Giant Perth he will likely also spend time with the event’s bike sponsor helping out with mechanicals, advice and whatever else needs to be done.

Originally from Sydney, Andrew’s been in WA for the last three years. In the past he has raced national and state rounds but these days he’s not as serious a rider (although that said he came 15th in the recent Dwellingup 100 despite being crook at the time).

This will be Andrew’s first Cape to Cape and although he’s not training specifically for the race, he’s getting in plenty of incidental kms (40km round commute on his roadie every day) as well as a session on the mountain bike at least once a week). He’s not 100 per cent sure what to expect from the course technically, although he thinks day one will probably be the hardest as all serious riders jostle it out for seeding. The main attraction for Andrew will be to see more of West Australia by bike, and to just socialise with plenty of customers who have registered to also take part.

Andrew’s advice to newbies? It’s all about nutrition, hydration and recovery. Be smart with all three and the four days will likely fly by. Keep up with news, reviews, interviews and more - follow us on Facie or subscribe to get our email