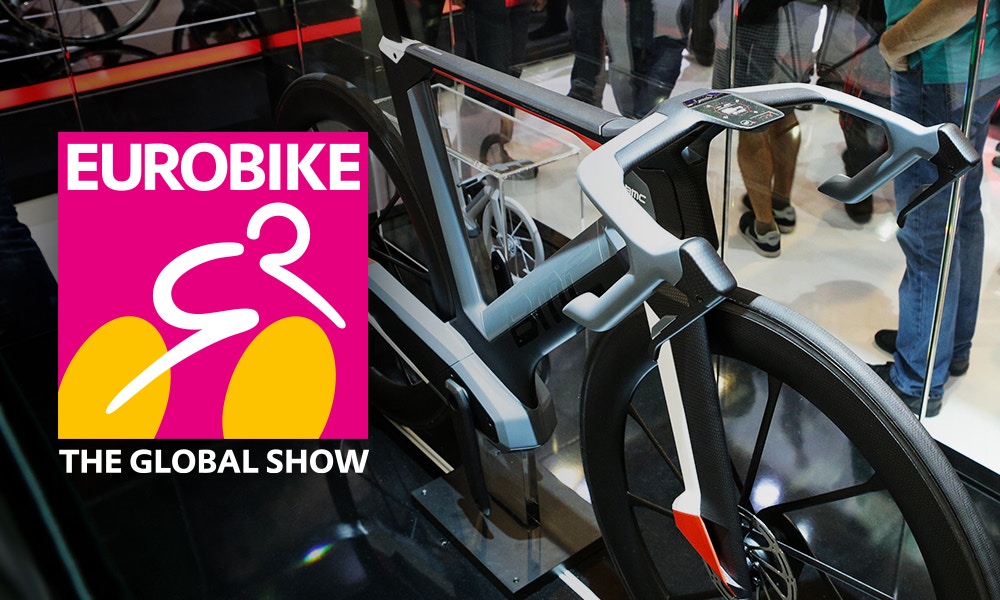 When it comes to endurance triathlons, there’s a lot of focus on keeping the legs as fresh as they can be during the ride, so they’re ready to hit the ground running. Literally. With that in mind the good folk at Bianchi have collaborated with Material Sciences Corp to develop Countervail®, a carbon fibre architecture and viscoelastic which is all about reducing/cancelling vibrations on the bike as well as increasing the frame’s stiffness and strength. Less vibration; less muscle fatigue. And a hot-looking TT. The Impec-lab is not a bike, it’s a concept. It’s a Swiss facility in which BMC clearly gets to have a terrific time with science and design… The latest result? Blade Runner-meets-Eurobike. One glance at this and you’ll be asking – where is everything? The answer – tucked away in compartments within the frame. The design not only reduces drag, it keeps lines clean and makes for one pretty impressive statement. Major Tom to Ground Control – we just found the bike that will look pretty at home strapped onto your spaceship.

Get the latest bike news here! ‘Camouflage Green’ might be its colour, but we think it’d be pretty hard to hide riding on this bike. Supermario was in his time one of the most powerful sprinters in the world, so his bikes are all about power and (according to the brand) ‘Italian works of art’. He stood out when he raced, and he’s standing out now through the bikes that carry his name. Check this out! OK so this bike was like spotting someone hot at a party – our eyes just zeroed in. The 2015 De Rosa collection is the result of tradition fusing with innovation, and Italian passion blending with research… and this one stood out a mile. So probably no surprises it’s the Titanio – for the serious metal and titanium lover.

The name says it all – this is Evoc’s trail building bag that pretty much packs everything but your kitchen sink. There’s even space for a chainsaw. Seriously – we checked (yep – they happened to have a chainsaw handy and so we pulled it off the shelf to fit it to the bag). Mountain bike superstar Darren Berrecloth was sent a prototype and apparently confirmed what the Evoc team was hoping to hear – they nailed it. No changes necessary, no improvements required. Pack your pick, your shovel, your chainsaw and everything else you’re going to need to create your very own trails. Very, very cool.

The team at Giant hasn’t been sitting idle – the 27.5” Giant Reign gravity machine is a total refresh of its previous model. This bike is the bees’ knees for aggressive trail riding and endure, and looks hot in its fresh blue and black.

The bike that FDJ’s star Thibault Pinot took to the infamous cobblestones of Stage 5 in this year’s Tour de France. The Shock Absorption Technology (SAT) features an elastomer ring designed to flex between the seat tube and the top tube. It also boasts a 27% increase in vertical flex compared to previous models. Not everyone races the Paris-Roubaix at world-class pace, but with this bike we can get that little bit closer to the fantasy… Check this out for a row of colourful carbon bling for the derriere! They were hard to miss. The big seller here is the ‘central channel’ design, meaning weight is evenly distributed across the saddle no matter what the cyclist’s position. An ‘eagle beak’ tip enables the rider to assume really low positions on the bike. The seat tube allows for generous adjustments and the rear depression looks after the derriere from the bruising and shocks that normally come with tough terrain.

Saddle up on Selle here The 2015 ONE-TWENTY model has taken on a decidedly different look to its predecessors. 27.5” wheels, 120mm full-suspension and completely fresh specs, geometry and kinematics. A 74.5 degree seat tube angle makes for hard pushing into pedals, but the long top tube and 68 degree head tube angle work with the short stem and wide bars to make for sweet descending. Merida’s answer to an up and downhill solution all in one.

Get your own Merida One Twenty now!

Rudy Project has been working with world-class cyclists for 25 years – Peter Sagan, Timo Bracht and Hansueli Stauffer are just some of the superstars to don these oh-so-cool shades. Helmet capability, aerodynamic features, super-sharp optical quality, air flow control (to prevent fogging up) and lightness are just some of the qualities synonymous with these super sporty sunnies. And they look the business. No surprises pro cyclist Peter Sagan is just one of many Rudy Project athletes. He gets around in these – Agon – and they look the goods.