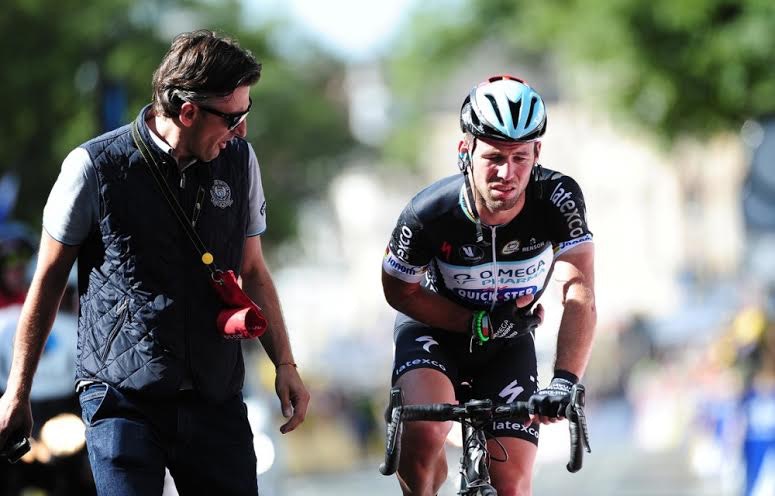 He had all the signs of achieving great things in Stage 1 of the 2014 Tour de France, but a spill just hundreds of metres from the finishing line may have cost Mark Cavendish (Omega-Pharma - Quickstep) not only the stage one yellow jersey, but possibly his time at the Tour.

He was well positioned to launch one of his famous finishing line attacks when his decision to look for a gap back-fired. In his own words, it turned out the gap just wasn't there and Cav came off, taking Simon Gerrans (Orica-GreenEDGE) and another cyclist with him.

Cav spent considerable time on the ground and looked every much a main in pain as he held his collarbone. A hospital examination has revealed ligament ruptures with an AC joint dislocation. Omega-Pharma - Quickstep will confirm on day two of the Tour whether or not Cav will be riding.

We're gunning for Cav and hope he recovers enough to make it back on the bike tomorrow.

News Update Unfortunately the crash has caused Cavendish to withdraw from the 2014 Tour de France due to a dislocated shoulder.

Cav (which is self-explanatory) or the Manx Missile (a reference to his explosive sprint ability).

At this year's Tour de France, Cav is on a custom-painted 49cm Specialized S-Works Venge.

Well, amongst other bragging rights, Cavendish is the only cyclist to win the final stage of the Tour de France four times in a row. He also sits behind only Eddy Merckz and Bernard Hinault as the cyclist with the most Tour de France stage victories of all time.

And if that’s not enough to impress…

The title that got away

Cavendish last month pulled out of defending his title as the British National Road Champion after a nasty case of bronchitis. Not prepared to take a single risk with this year's Tour de France, Cav obviously has planned to lose that battle in order to win the war.

Let’s not forget the MBE

Cavendish got out of the Lycra and into something a little more formal for a trip to Buckingham Palace, where he was awarded an MBE (Member of the Order of the British Empire) for his services to British Cycling (his win in the UCI Road Race World Championships alone ended a 46 year hiatus for a Briton to be back in the rainbow jersey).

In 2012 Cavendish established the Cavendish Scholarship, designed to support talented sportspeople from the Isle of Man (Cavendish’s hometown isle).