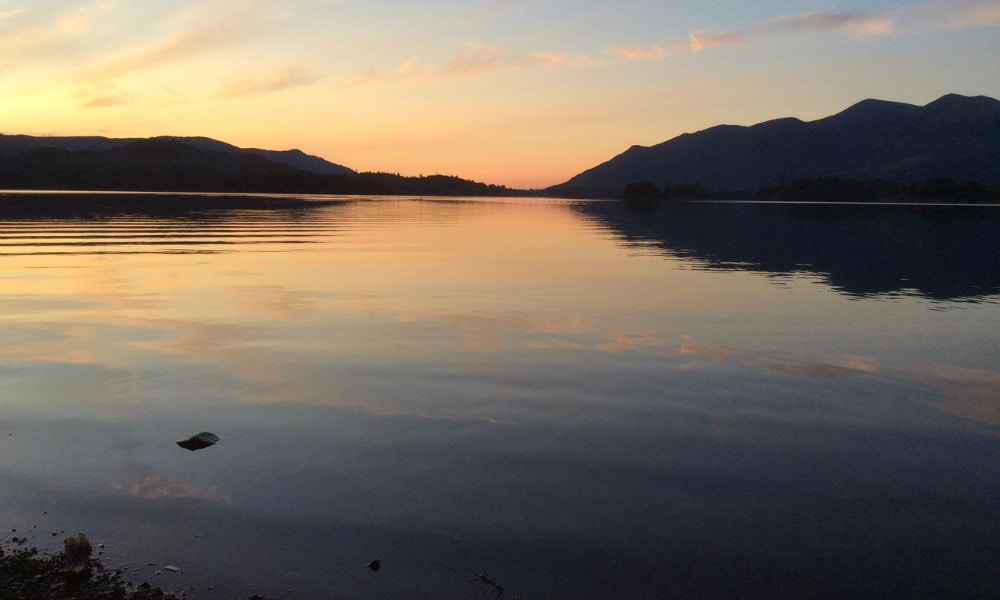 I met a fellow Dutchman near Dunottar Castle. We rode together for half a day and then parted ways. Ten days later I met him on the road between Thurso and Durness – totally empty, devoid of traffic and people. We stopped and chatted in the middle of the road for about 20 minutes. He was heading for the Orkneys, I was heading for the Hebrides. I still don't know his name.

There is one thing that many of us crave in this perpetually connected world of ours: space.

With the persistent bombardment of tweets and comments; of likes and shares and clips and friend requests from people we’ve met once, the pressures of work and family and the online realm seem to take up all of our time and much of our space — our physical space, and the space that we usually reserve in our minds: that figurative park bench that every now and then we like to sit down at, alone.

Kees van den Oever was in need of some space and time out from it all. Like many of us who ride, the bike is his favourite way of finding it.

He was feeling tired of his job – not over it – he just needed a break, like anyone does now and then when they have been working hard and the word ‘holiday’ repeats in the back of their mind, the only apparent cure.

“What would happen if you were cycling to the office and just kept on pedalling?” — Mike Carter

There is a book titled ‘One Man and his Bike’, by Mike Carter that begins with this premise. Carter was riding to his work at the Guardian in London and decided to just keep cycling around the coast of Britain.

Knowing Kees has read this book, I imagine him pedalling to work, dreaming of the day he could just keep on pedalling.

But unlike Mike Carter, Kees would have to begin his journey by air and get to the pedalling later.

Having emigrated from Holland to NZ in 1978, Kees has lived and worked in Christchurch ever since. Partly inspired by ‘One Man and his Bike’; mostly eager to satisfy a long-time dream of his own, Kees flew back home in May of 2014 to get ready for his own cycling adventure around the United Kingdom.

He landed in Holland and spent some time preparing for his epic journey. He bought a Trek touring bike and a set of panniers, and spent a lot of time trawling the Sustrans website for advice as to which routes to take. Sustrans is a British charity that promotes sustainable transport and getting more people travelling in healthy, environmentally conscious ways.

The wheels already in motion, Kees set off through the South of Holland, crossed the border into Belgium and followed the coastline to France. See also: Aaron Bleakley is the Half-Man of Velo

I would bike on a wide promenade with skyscraper flats and apartments on my left, the English Channel on my right. The weather was benign and so biking was very easy and a pleasant start to, what I knew, would be an arduous journey.

Crossing the Channel from Dunkirk to Dover by Ferry Kees readied himself for England where the ride would really begin. He travelled through the Lakes District of England: the countryside that inspired the words of Wordsworth, and Coleridge.

He pushed his bike laden with tent, clothing, food and camping equipment up impossible 30% climbs near the coast in Devon and Cornwall.

He recalls clearly the “shortbread biscuit tin scenery” of the Lammermuir Hills and the Moorfoot Hills in Scotland.

He can still feel what it was like setting up his one person tent in John O'Groats on a campsite located on a cliff overlooking the waters to the Orkneys; feeling the overwhelming gravity of the present — the realisation of what a huge undertaking his journey was slowly becoming.

And he can still hear the sound of Mozart drifting through a tunnel on a converted railway line that served as a cycling track leading into bath.

But like many adventures – even those that we set out upon unsupported and alone – what Kees remembers most clearly is the characters that popped in and out of the narrative.

Off the Northern coast of Scotland, the Orkney Islands are home to some of the oldest and most well-preserved Neolithic sites in all of Europe. A highlight for Kees in a number of ways, he vividly remembers meeting a 78 year old German man who was on a cycling adventure of his own. He wore simple trousers and a wind jacket. He was cycling through Germany, England and Scotland on his 10-speed bike – none of the fancy stuff for him.

They parted ways after sharing stories in the quiet countryside. See also: Cycling the Karakoram Highway in Pakistan and China

Hearing these stories of brief human contact, of days spent riding and meeting literally no other human soul on the road, I couldn’t help but wonder if Kees ever got lonely out there.

"You are never truly alone...

In the Isle of Harris, I was ready to stop for the night, but there were no lodgings so I had to camp for the night. I put up my tent but had very little food...there was no shop anywhere nearby. So I took shelter in the little kitchen which was a converted shipping container. I talked to two Scots, both from Glasgow — I could hardly understand a word.

When the rain stopped, I went back to the tent and I sat down for a while under a watery sun and howling wind. The same guy from the kitchen offered me pieces of chicken and a hot drink. I was ever so grateful, but I felt a bit pathetic. Such kindness. Every Scot was like that to me.

Cycling on the edges of Snowdonia in Wales from Dolgellau to Criccieth I came past huge coal mountains on the way to Porthmadog. Going uphill, tired, I stopped outside a kind of blacksmith workshop. The blacksmith came out and offered me a cup of tea. We sat down on opposite side of the road, having a chat with the occasional car driving through the conversation. At the end, roadworks stopped me from cycling straight through and so had to cover a detour of about 14 km after a stupendously hard day."

Cycle touring unassisted is of course, not without its challenges. You have “big days and not so big days”, moments when it all just seems to come together as though it was planned that way. But Kees made sure to keep his plans pretty flexible.

I paced myself, I looked after my diet and made sure I dropped anchor each day no later than 4 p.m. Finally, I was totally blessed by a great English summer, just two punctures and no health issues.

It just so happened that Kees was cycling through Scotland at a time when the nation was hot with the debate as to whether Scotland should become and independent nation. One of many Scottish Castles

The most common question he was asked however was not, “Independence: yes or no?”

The most common question the many people he met along his journey was, “why are you doing this?”

And it is the same question that I would ask of him. But for some reason we always begin with questions that I suspect we already know the answers to.

"I come from the European continent but apart from a few fleeting visits, I had never seen England, Wales and Scotland properly. I enjoy the culture, history and heritage, and the bike was, for me, the best way to see it: it is slow enough to take in the environment, to allow the scenery to come to you….

The final stretch took me through Cumbria and the Lakes District, Yorkshire Dales, Lincolnshire, Norfolk and East Anglia before finally arriving in Harwich 4 months and 6,838 km later. I could have easily turned around there and then to do the whole lot all over again." Big thanks to Kees for sharing his story and the amazing photographs he took along the way.