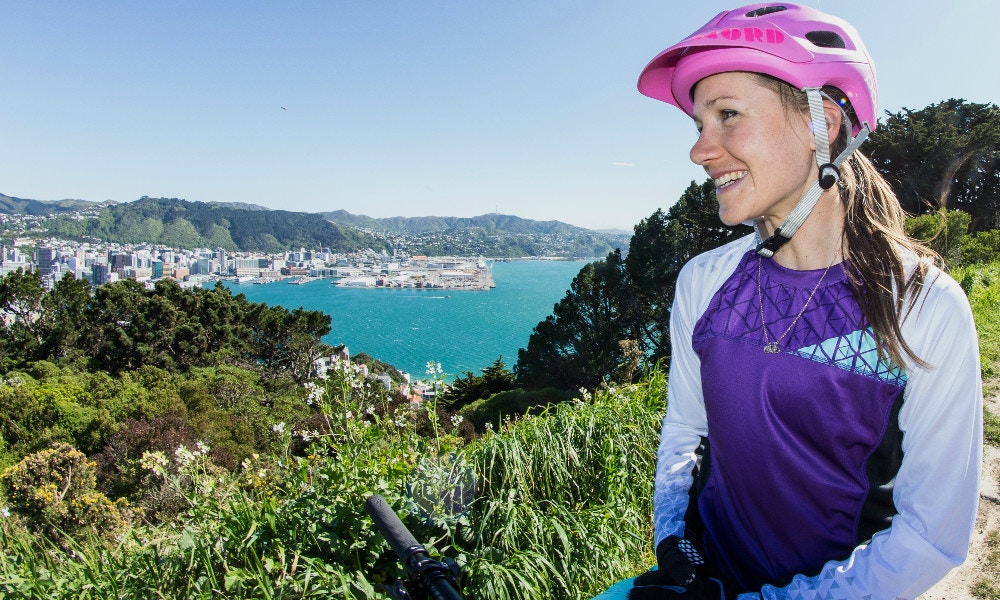 When we first caught up with Samara Sheppard she was in the thick of preparing for the Lake Taupo Cycle Challenge and the racing season to come, having just returned from racing road in Europe. We asked what her goal was for the 85km Huka Challenge, and she responded saying she’d “just like to win it.”

And on Saturday November 28, she did.

We sat down with the winner of the women’s Contact Huka XL 85km Elite Mountain Bike Race, Wellingtonian Samara Sheppard to find out how she managed such a feat and what her aspirations are for the future. Samara, what have you been up to since we last spoke?

Well we had a couple of club races in Wellington, and there was a couple of strong riders there. I managed to take two wins, which was a strong introduction back into cross country racing, getting back on the mountain bike.

And from there I went to Tasmania last weekend and did the Hellfire Cup, which is a four day mountain bike stage race competed in pairs. Short, intense time trials, and circuits and also some endurance stages as well. It was fantastic — so much fun. Unfortunately I had a couple of mechanicals so we finished up fourth...it was quite a competitive field. I had quite a bit of pain in the legs after, just remembering how it’s done.

And then, yeah…made it to Taupo…

It’s great that you had your confidence up from those club races in Welly.

Yeah and Tassie was great as well; there were some really strong girls there. It gives you a chance to benchmark yourself and gauge how you are doing…and remember how to suffer. Why have you decided to come back and compete this year?

I’ve raced the Huka Challenge three or four times before. Every time I race it I think, ‘I’m never doing that again, that race is so hard.’

Every time I’ve raced the Huka Challenge I’ve had a bad day. Little things have gone wrong that have meant that I haven’t finished as well as I would have liked.

It’s a great time of year to be back in NZ, and seeing as I am here for the domestic race circuit it’s a good opportunity to catch up with everyone and ride Taupo.

You were riding road over in Europe earlier this year, what’s the transition back to mountain biking been like for you?

It’s taken a bit of time to get the feeling back for mountain bike riding: training is quite different, you know getting out on the trail and focusing on technique, riding downhills fast, and getting the feel for your bike. So I’ve been doing that continuously over the last couple of months, and it’s been getting better and better, which is really motivating.

Have you been surprised at all by the advances in mountain bike technology making the transition?

Well I’ve just recently got a trail bike (Specialized Rhyme) and it’s opened up a whole new world of riding to me. You can attack things harder that you would never have tried on a hard tail, and it will get you out of situations that you never thought you could save yourself from.

I ride a Specialized Fate hard tail. The experience I get riding my trail bike transfers really well to the Fate. I find that it gives you the confidence that you can ride certain lines faster: it shakes you up a bit more but you have that confidence to do it. Yeah...I think everyone needs like, ten bikes — all different – every bike has its own place. Tell me about the race yesterday, how were you feeling going into it?

Yeah I was looking forward to this one actually. It’s a pretty big race in New Zealand, and Specialized NZ really get behind the event, pulling all the supporting stores and riders together for a great post-race experience inside their tent. Everyone else is here, so I really wanted to have a good day…and I managed to do that.

It’s quite a long ride for me, I don’t normally ride for 4 ½ hours, so to race for 4 ½ hours, full gas is pretty full on. And you know I went off the line like a XC race, sprinting off the start, but I found a good group to ride in and found my rhythm. And there is one girl who was the 24 hour endurance champion last year, and I thought ‘just keep going, she’s going to chase you down, just keep going…keep going.’ I was really happy with the way things went and with my time as well.

What was the most challenging part of the course for you?

The duration of the race. 85km maxed me out... The trails in Craters Mountain Bike Park are so much fun – there are little jumps and berms that you can get sideways on – so that was really cool. But after two hours I was thinking ‘phew, yep, half way’… You get a real sense of achievement just finishing that course.

Has the course changed drastically since you last competed?

Yeah they do change it around a bit. This year it was reversed so that was fun. You start out in more open sections, which allows everyone to find their place and then the last ¾ is awesome single trail.

So you want to be in a good bunch for the 4WD track, and then you want to be as far forward as possible going into the single trail because it’s harder to pass at that stage in the race.

How did the conditions affect the course, was the rain a challenge for you guys?

No it was really good! There is quite a lot of pumice (porous rock) in there and the trails held up really well – the pumice soaked up the rain. In some parts you could see it was damp, but it was still really grippy.

Everyone out on the road said they got soaked, but we didn’t even notice it in the trees. So yeah, I think we had the best course option on the day. See also: A young kiwi gun making tracks of her own

What’s next, what’s up on your radar?

I told myself that if I won the Huka Challenge I would use the prize money to head to Australia in two weeks and race the National Mountain Bike Series in Canberra at Mount Stromlo. It will be a good benchmark because I haven’t raced a big XCO race in a long time. And there are some fast girls over there – Bec Henderson, Peta Mullens – so it will be cool to see where things are at, and to plan the next step. I’m planning to do a lot of racing in Australia over Jan and Feb actually, because there is a greater depth of field over there and a lot of UCI points up for grabs. Then NZ Nationals and the Oceania Champs are in March, followed by the first World Cup in April. Once I’ve got through all of that I will reassess and see how things are going.

Do you have aspirations for Rio?

Yup [laughs]. I mean everyone has Olympic aspirations right? Look it’s really tough. NZ only has a spot if Australia keeps their ranking high enough – which is pretty up in the air at this stage. It’s totally beyond our control. If they keep it up then we will get that spot. But then you have to prove to the NZ Olympic committee that you are worthy of a top 16 placing at the Olympics otherwise they won’t want to invest.

Are you going to come back to Taupo next year, defend your title?

Yeah definitely. I love it here, you know this is such a beautiful place, and it’s always a great weekend. I always try and race mountain bike or road…yeah, I wouldn’t miss it. Thanks to Brett Kennedy for the fantastic headline shot of Samara