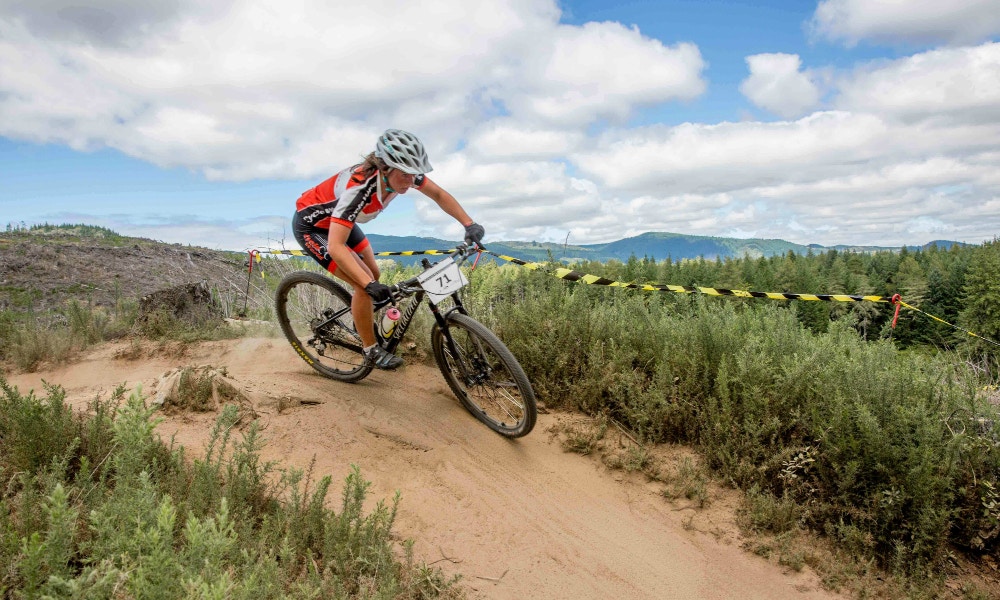 Our job is awesome not least of all because we often hear about young people getting out on the trail and making tracks of their own. Shannon Hope is just one such junior mountain bike rider making an impact on the circuit in New Zealand and abroad.

Shannon’s been riding MTBs since she was knee high to a bottom bracket. She remembers “watching Mum and Dad at local comps and wanting to be like them”, so it’s no surprise to find out that at the age of 17 Shannon has been racing competitively for the last six years. And she recently found out that her successes on the track have qualified her for a shot at the World Champs in Andorra later this year!

In the first week of September, Shannon will travel to Andorra to compete in the UCI Junior MTB World Champs. Vallnord Bike Park is situated high up in the Pyrenees ranges and at an altitude of 2000m above sea level can present a totally different challenge to riding at home. It’s a good thing Shannon is from Dunedin.

Shannon spends most of her time training in the mountains in New Zealand’s deep south under the guidance of her coaches, Aaron Bleakley, Megan Gibbs and Scarlett Hagen.

Scarlett has primarily been working with Shannon on her bike skills. A World Champion herself, Scarlett has recently formed Bike School, New Zealand’s premier coaching company that works closely with schools to get kids confident on the bike and off the beaten track. Shannon is also working closely with her coach Aaron Bleakley, founder of Fortrin Coaching and Megan Gibbs, her strength and conditioning coach from High Performance Sport NZ. The two work together to alternate her training regimen with hill climb sessions, long distance rides and skills work with Scarlett.

Find out more about Bike School right here on our blog

“I found out pretty recently that I got in, so it’s quite short notice, but I have been training really hard and I’m really looking forward to it,” said Shannon.

Shannon is no stranger to big competition, finishing 2nd at the Junior Continental (Oceania) MTB Champs in Toowoomba earlier this year. And while she might be competing specifically in the World XC event, she recently came second in the DH at NZ’s secondary school champs in Auckland, missing out on first by only three seconds! Training across multiple disciplines certainly has its benefits.

Young Kiwis have been doing great things on the track lately and with the likes of Anton Cooper taking out the Commonwealth games last year, we can expect many young kiwi riders getting into competition. Shannon said that she would tell any young rider to give competition a go, because “you never know what could happen, and it’s definitely worth trying for yourself.”

But with all this training we couldn’t help but wonder how she managed to fit in time for her final year of High School.

“My school has been really supportive towards me which is awesome, and I kind of knew that I wanted 2015 to be my big year since it’s my last year racing in under 19s. I can miss a few classes and still manage to get enough credits to pass the year.” It sounds like Shannon has it all planned out, at least until the end of the year.

When we asked her what she had planned for post-high school life, she paused. She said she’s still unsure what’s next, but we figured it’s better that her mind is focused on Andorra. I mean, I sure didn’t know what I wanted to do when I was seventeen either.

A big thanks to Oliver Young for the awesome shots of Shannon.

We are pumped to hear how Shannon gets on in September! If you haven’t yet, friend us on Facebook and get our email to stay up to date with news, reviews and other awesome stories of people doing big things on bikes.