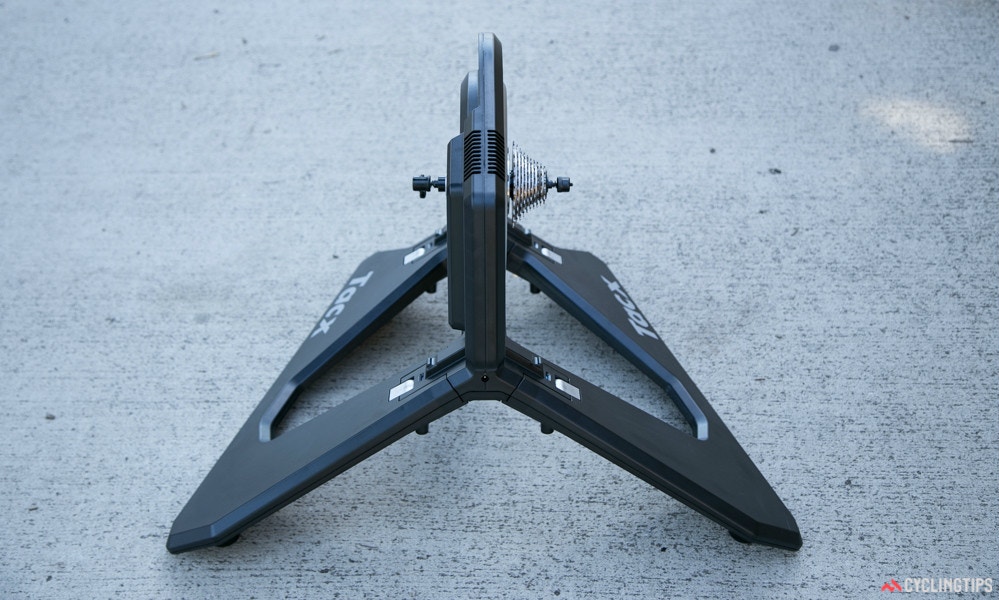 It’s been a few months now since Tacx revealed its top-of-the-line Neo Smart trainer, prompting considerable fanfare from some within the cycling industry. Some suggested the device could “redefine” the indoor trainer market with its realistic road feel; others echoed Tacx’s claims that the Neo Smart is the quietest trainer on the market.

So how does the Tacx Neo Smart stack up? And does it perform well enough to justify its hefty pricetag?

As we’ve come to expect of ‘smart trainers’ (and indeed of turbo trainers in general) the Tacx Neo Smart is very heavy, and not without good reason – there’s a lot of machinery under the hood and the weight contributes to the stability. But at 21kg it’s awkward to get out of the box, awkward to move around and somewhat awkward to set up (extending and collapsing the legs effectively requires tipping the unit on its side).

If you’re lucky enough to have a dedicated space where you can leave your trainer set up, the unit’s heft is unlikely to be an issue. But if you live in an apartment or elsewhere where space is at a premium — or if you’re planning to take this to races for your warm-up — you’ll likely find it a hassle to set up and pack down the Neo Smart every time you use it. (If this is the case for you, it’s worth noting that Tacx has a range of other, more portable trainers that might be more suitable).

Carrying the Neo Smart any sort of distance is particularly challenging — when the legs are folded up it’s difficult not to get your fingers jammed between the legs and the cassette. And when the legs are extended, the unit is very unwieldy, making it difficult to carry. (Again, it’s worth pointing out that the Neo Smart certainly isn’t the only trainer on the market that’s heavy and awkward to move around). Those criticisms aside, the Tacx Neo Smart does look sleek once it’s fully set up. The matte black finish is simple and stylish and the package as a whole looks solid and stable.

As a ‘direct drive’ trainer, the Tacx Neo Smart connects directly to the drivetrain of your bike. You simply take off your back wheel and attach the bike at the rear dropouts, connecting the chain to the cassette as you would when putting a real wheel on your bike.

(It’s worth noting at this point that the Tacx Neo Smart doesn’t come with a cassette. However, the included Edco freehub body is compatible with all nine-, 10- and 11-speed Shimano and SRAM cassettes and most Campagnolo cassettes).

The Tacx Neo Smart’s direct drive system does away with the need for the rear wheel to turn a roller on the trainer, ensuring a more efficient power transfer (and no worn-down tyres). In fact, one of Tacx’s key marketing messages around the Neo Smart is “the lack of any physical transmissions” — this means no flywheel, no belts and no rollers. Instead the Neo features a powerful electromagnetic motor which controls the resistance the rider will have to ride against.

Among the biggest claims Tacx makes for the Neo Smart is the realistic road-feel it provides, not least because of the ‘downhill drive’ functionality. While most if not all smart trainers can reduce the resistance facing the rider when they reach a downhill section of the virtual course they’re riding, those trainers won’t simulate the increase in speed you get on a descent. To quote from the Tacx website, the Neo “speeds up during descents”, actually assisting you in producing power.

In practical terms this means you’ll hear the sound of the freehub as you’re ‘descending’, and you’ll hear it spin faster as your ‘speed’ increases, just as you would in the real world. Contrast this with most other smart trainers which simply coast to a stop once you stop pedalling on a descent.

So how much of an impact does this have on the ‘road-feel’ of the Tacx Neo Smart? To me personally, not a whole lot. Sure, it’s a nice little feature, and it does make the experience a little more ‘realistic’ but in the grand scheme of things it’s not a feature I’d consider a must-have.

While the downhill drive and other resistance-control functions require mains power to operate, the Tacx Neo Smart is still usable when not plugged in. In this case it operates as a simple but effective fluid trainer — the higher your speed, the higher the resistance.

The first thing I noticed when I jumped on the Neo Smart and started pedalling was how much side-to-side motion there was, despite the unit’s considerable weight and bulk. Even when I found out that the rocking was a design feature (to simulate the rocking and flexing of the bike out on the road) rather than a flaw, it still took some getting used to.

If you look at the floor in front of you when you’re riding, you’ll notice a coloured light coming from underneath the Neo Smart. The colour of the light varies depending on the intensity of your effort — blue for ‘low power’, red for ‘high power’ and purple for somewhere in between. It’s a nice little feature but one that you’ll likely forget about after a few sessions. (It’s also unclear what the power thresholds are for each colour).

One of the key selling points of the Tacx Neo Smart is how quiet it is. Indeed, the word “silent” is even used in some of the Neo Smart marketing collateral. When compared to similar units (such as the Wahoo Kickr, as seen below) the Tacx Neo Smart is certainly quieter; indeed, it might well be the quietest trainer on the market.

But if you’re looking to buy the Neo Smart on grounds that it’s ‘silent’, bear in mind that, as with all other trainers, there are other sources of noise than need to be considered — your chain, for example.

Like other ‘smart trainers’, the Tacx Neo Smart can connect to and be controlled by a range of devices, allowing automatic adjustments to the trainer’s resistance in accordance with a particular workout or virtual activity.

The Neo Smart uses the ANT+FE-C and Bluetooth Smart protocols, meaning everything from Garmin head units to iPads can be connected. Power and cadence data are calculated by the Neo Smart without the need for dedicated sensors. That data is then beamed out to whichever device(s) you have connected. Out of the box you’ll be able to use Bluetooth Smart to connect the Neo Smart to your tablet or smartphone and then use your choice of app to simulate and record a ride. Tacx has its own app called Tacx Cycling which is available on iOS and Android and which can be downloaded and used for free, once you sign up for an account.

The app gives you the ability to train to a specific heartrate or power output, simulate a climb or create your own training session based on these protocols. There’s also the ability to download Workouts and Films. The former are curated training sessions targeted towards a set goal, while the latter are videos of famous climbs and other roads which allow you to virtually ride the course (with gradient changes simulated by the Tacx Neo Smart) and have your data presented as an overlay.

While there are a couple of free films available, they are both less than 4km long and downloading additional films costs $17 each — more than I’d expect and would probably be willing to pay. Climbing the Cauberg in one of the short Tacx Cycling app demo films.

While the Tacx Cycling app is fine and works as you’d expect, I spent most of the review period using Zwift. In order to get this (or other computer-based apps) to work you’ll need a laptop, the Zwift software, a Zwift account and a USB ANT+ antenna.

Sadly this antenna doesn’t come with the Tacx Neo and buying one will set you back between $40 and $80, depending on what brand you get and where you get it from.

The Tacx Neo Smart works perfectly with Zwift. With the ANT+ antenna plugged in to your computer, Zwift will automatically discover the trainer and any other ANT+ devices you have going, connecting them all right away. It took mere seconds for me to get this working, and I was riding around Zwift’s virtual course in no time.

The Tacx Neo Smart is not cheap — the recommended retail price of AU$2,499 is going to put off a large number of would-be customers. At this price bracket it’s between $500 and $1,000 more expensive than the Wahoo Kickr, a unit that is already expensive for a stationary trainer. It’s also worth bearing in mind the additional cost of buying a cassette, for those that don’t have a spare one sitting around.

The Neo Smart is available in a selection of stores around the world – check the Tacx website for region-specific information. It is also available for purchase online, including through Wiggle and Chain Reaction.

There’s no doubt that the Tacx Neo Smart trainer is an impressive piece of engineering. It looks great, performs admirably and will do just about everything you could want a stationary trainer to do. The Neo Smart’s range of connectivity options ensures you can use whatever virtual training platform you like, customising the experience as you see fit. The home screen of the Tacx Cycling app.

But as mentioned above, it’s difficult to ignore the hefty pricetag.

For $2,500 you can get yourself a good road bike; spending that much again on a trainer is likely to be a considerable barrier for many would-be customers. Even for Zwift-obsessed riders that do most of their riding indoors, it’s questionable whether the Tacx Neo Smart offers enough value to be worth buying over rival products. (We’ve been told that Tacx is looking to lower the price of the Neo Smart in order to compete with the Kickr.)

For the extra $500-$1,000, the main benefits you get are the downhill drive functionality and the fact the Neo Smart is noticeably quieter. The downhill drive, while a clever piece of engineering and a nice touch, doesn’t to my mind revolutionise the home trainer experience. And while the Neo is definitely quieter than its competitors it’s not clear that this is worth the (considerable) additional spend, given riding on a trainer is already going to be noisy, regardless of your trainer choice.

Ultimately, whether a product is ‘worth it’ or not is a personal decision, dependant on what you want to get out of that product, how important each of the features are to you, and, of course, how much money you’re willing and able to spend. The Tacx Neo Smart does just about everything you could expect a modern trainer to do. It has a range of connectivity options that make it compatible with just about any device you could want. It is quieter than most (if not all) competing devices, and features such as the downhill drive serve to increase the 'realism' of the experience, if only slightly. The Tacx Neo Smart's biggest drawback is the cost – most will be unwilling and/or unable to afford the considerable asking price, to the detriment of what is otherwise an impressive product.