Trek at the Tour de France 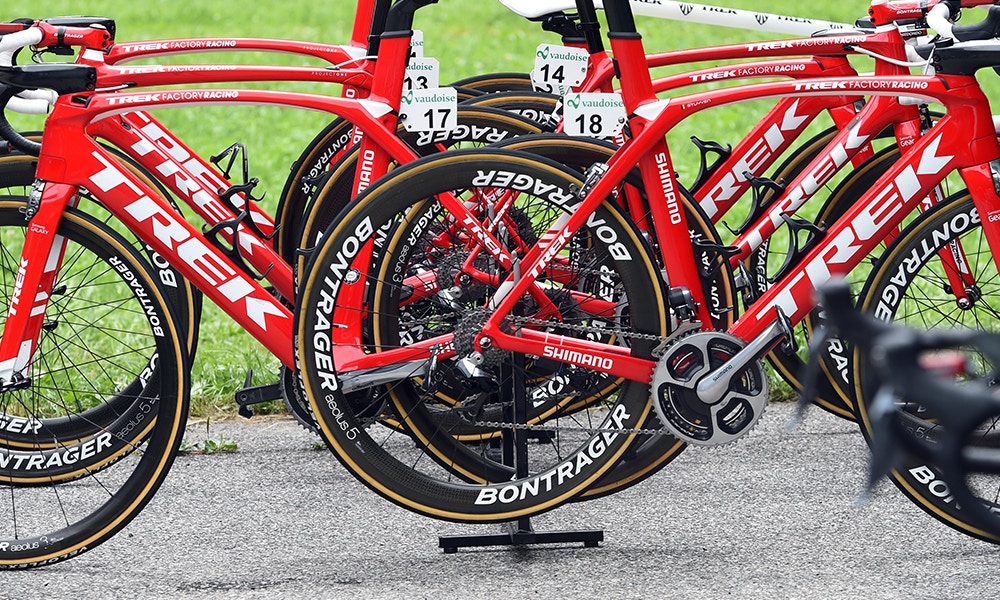 The Madone is Trek’s long standing road machine. It has been developed over recent years to be Trek’s aero road bike. The latest version has landed just in time for the 2015 Tour, and has had a significant upgraded. The frame now resembles the Speed Concept with wide shapes and Trek's KVF profile. The brakes are integrated saving watts, but still easily accessible which will make all of the mechanics happy. The Isospeed technology with is such a feature on the Domane has been incorporated to the Madone, giving the riders a compliant ride, whilst being able to maintain an incredibly stiff frame.

For an aero bike it is still very light, the frame weighing around 725grams, which is slightly heavier than the Emonda (see below) but well below most of its competitors. The handlebars are one piece and present a flat profile, making them much stiffer and aerodynamic then previous set ups. With its aero profile and light weight, expect to see the Madone ridden on the mountain stages as well as the flat lands. Thanks Trek for the great image.

Short on time? See this 1minute overview of the Emonda

The Emonda is the latest offering from Trek and was built to go up! It is the lightest production bike in the world, the frame weighing under 700grams! This was built for the climbers, not utilising Trek’s KVF shape on the frame in favour of saving grams for the steepest of mountains. It still has the huge bottom bracket, which is stock across the Trek fleet to accelerate and transfer power exceptionally well. Expect to see the Emonda fighting for polka dot points. Discover more about the Emonda

With the pavé returning to the Tour de France in 2015, Trek’s endurance bike, the Domane, will once again make an appearance. The whole bike has been reengineered to sail over the harshest of roads. The IsoSpeed decoupler is at the centre of the bike’s compliance and smooth ride. It takes away much of the vibration from the road, whilst maintaining bottom bracket stiffness to ensure the riders still have power when they need it. The headtube, downtube, bottom bracket and rear wheel connection (all of which have a totally different shape to the others in Trek’s road range) further add to the comfort and stability of the bike. The bike was built for Fabian Cancellara and he will more often than not ride the Domane - even on flat road stages - such is the quality and performance.

Check out our review of the Domane Trek’s Speed Concept was ahead of its time in terms of aerodynamics and integration. All of the aerodynamic technology you now see on Trek’s road range is borrowed from this machine. The frame has the KVF shape throughout and everything is integrated; the brakes, cockpit, cabling, electronics… everything. Recent versions have dropped weight whilst maintaining their integration, leading to an overall faster product. Time Trial superstar Fabian Cancellara has had a lot to do with the evolution of the Speed Concept, and if product development is coming from him, you know it’s going to be of the highest quality.