Find a bike shop Blog
‹ back
Home
Blog
Reviews
Pantani: the Accidental Death of a Cyclist

Pantani: the Accidental Death of a Cyclist 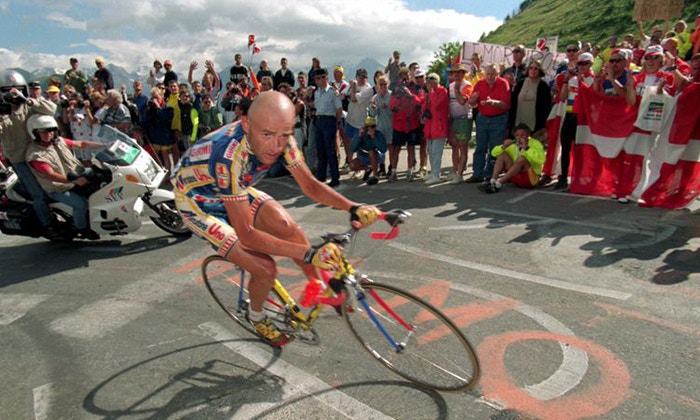 He climbed like he was floating, and died alone in a hotel room ...

As the world prepares for the Tour de France, a soon-to-be-released film, Pantani: the Accidental Death of a Cyclist will probably re-spark plenty of debate about professional sport and the various skeletons in its cupboard.

The film is about Italian climbing legend, Marco Pantani. A brilliant cyclist who climbed mountains like he was floating, nobody ascended quite like Pantani. Tragically however, fame and notoriety followed Pantani in equal parts, and a new documentary, “Pantani: the Accidental Death of a Cyclist’, looks at his rise and fall through a series of interviews and race footage. As former cyclist Greg leMond states, ‘mountains are where the pure, raw talent comes out’, and mountains were indeed where Pantani not only unleashed his flawless ‘Swiss watch’ cycling prowess, but where he felt most at ease.

As one interviewee states, Pantani the teenager used to hold back just before the beginning of an ascent, letting other lads in his bunch get a slight head start. The interviewee asked Pantani why he would smile as he let them go; ‘…because you don’t know how good it feels to see my friends suffer on climbs. For me, it feels good!’ Pantani: the Accidental Death of a Cyclist journeys us through the life as well as the death of this legend in cycling, nicknamed ‘il pirata’ (the pirate) in reference to his shaved head, earring and bandana. 36 pro wins, a horrific downhill head-on crash with a vehicle (the Pino Torinese road had not been properly closed off to traffic), rehabilitation for over a year, women, his public battles with Lance Armstrong, and of course the notorious three-month suspended prison sentence for testing positive for high haematocrit levels… right up until his lonely death from drug overdose in a hotel room in Rimini, on the Adriatic coast. It’s all there, and it makes for gripping viewing, especially in a modern-day world where the issue of banned substances and emotional health of elite athletes is never more than a sensational media headline away.

Pantani: the Accidental Death of a Cyclist is set to arrive in New Zealand via DVD from July 30. Visit here for details.