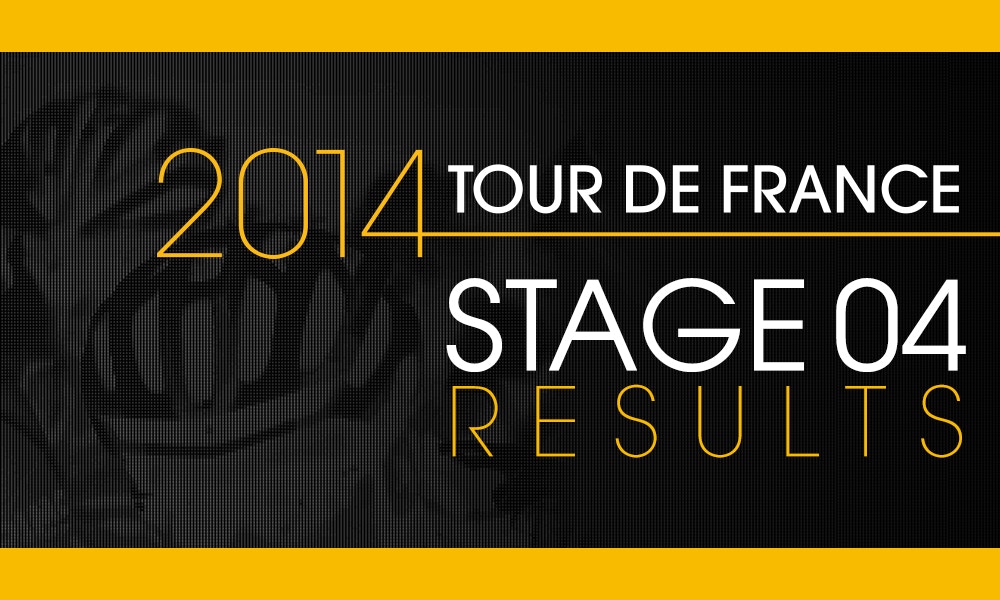 What a thrilling arrival to France! We couldn't have asked for more action in today's racing, which saw sprinting superstar Kittel work for every millimetre of his half-wheel victory. Find out more!

Find out what the different colour jerseys mean

Kittel was on fire today in France, rocketing to the finishing line to secure his third stage victory thus far, ahead of Norwegian Alexander Kristoff (Team Katusha) and French Champion Arnaud Demare (FDJ.fr).

But Kittel had to work hard for his place in history as the fourth only rider (Maertens 1976, Faber 1909, Pottier 1906) to win three of four individual Tour de France stages.

With Omega-Pharma – Quickstep barrelling towards the line around four kilometres out, Giant-Shimano produced yet another stealth surge to perfectly poise their leader.

But Katusha was also working every bit as efficiently to give Kristoff a textbook lead-out. The Norwegian threatened Kittel right to the very end, with about half a wheel separating the two. As was the case yesterday, Sagan stuck to the German’s wheel but just didn’t have enough power to pull ahead of the world’s best sprinter.

Despite the win, today’s racing may have left the slightest of chinks in Giant-Shimano’s seemingly untouchable armour.

“Today we saw that we are not unbeatable … It was a tough day,” confessed Kittel.

Find out more about Kittel

Special mention goes to Europcar’s Thomas Voeckler (who in the past has spent a total of 20 days wearing yellow), who did his country proud during day one on home soil. The self-confessed ‘diesel’ Frenchman was involved in a long breakaway. Suffering no illusions of making it to the finish line ahead of the pack, Voeckler nonetheless ‘had fun’ in what was first a duo, then solo, breakaway performance along today’s course.

And the big names continue to drop like flies so, so early in the piece with news that Andy Schleck (TFR) is out following his fall yesterday, which has resulted in a ligament injury.

Not out (but certainly briefly down at the start of today’s racing) was reigning Tour de France Champion Chris Froome (SKY), who got caught up in a tumble before remounting to race the rest of the course bruised and scratched. Team Sky is taking no chances, sending Froome in for precautionary x-rays. They're no doubt a little nervous about any spills that might make their star vulnerable ahead of tomorrow's super challenge (see below).

Three Lotto-Belisol cyclists crashed, taking with them Greg Henderson’s 2014 Tour de France ambitions. The Kiwi lead-out man for Andre Greipel fell on a knee that has already received a lot of work. The fall cut a deep 12cm gash exposing the bone – he returns to Lotto-Belisol’s base in Belgium to undergo surgery.

Eek! Tomorrow it’s one of the most hotly-awaited stages – the cobblestones Ypres and Arenberg.

And to add drama and tension – rain has been forecast. It’s going to be one hell of a ride – see you tomorrow!

Got the Tour de France bug? Get your fix here