Find a bike shop Blog
‹ back
Home
Blog
Features
Is This The Face of Future Bike Riding?

Is This The Face of Future Bike Riding? 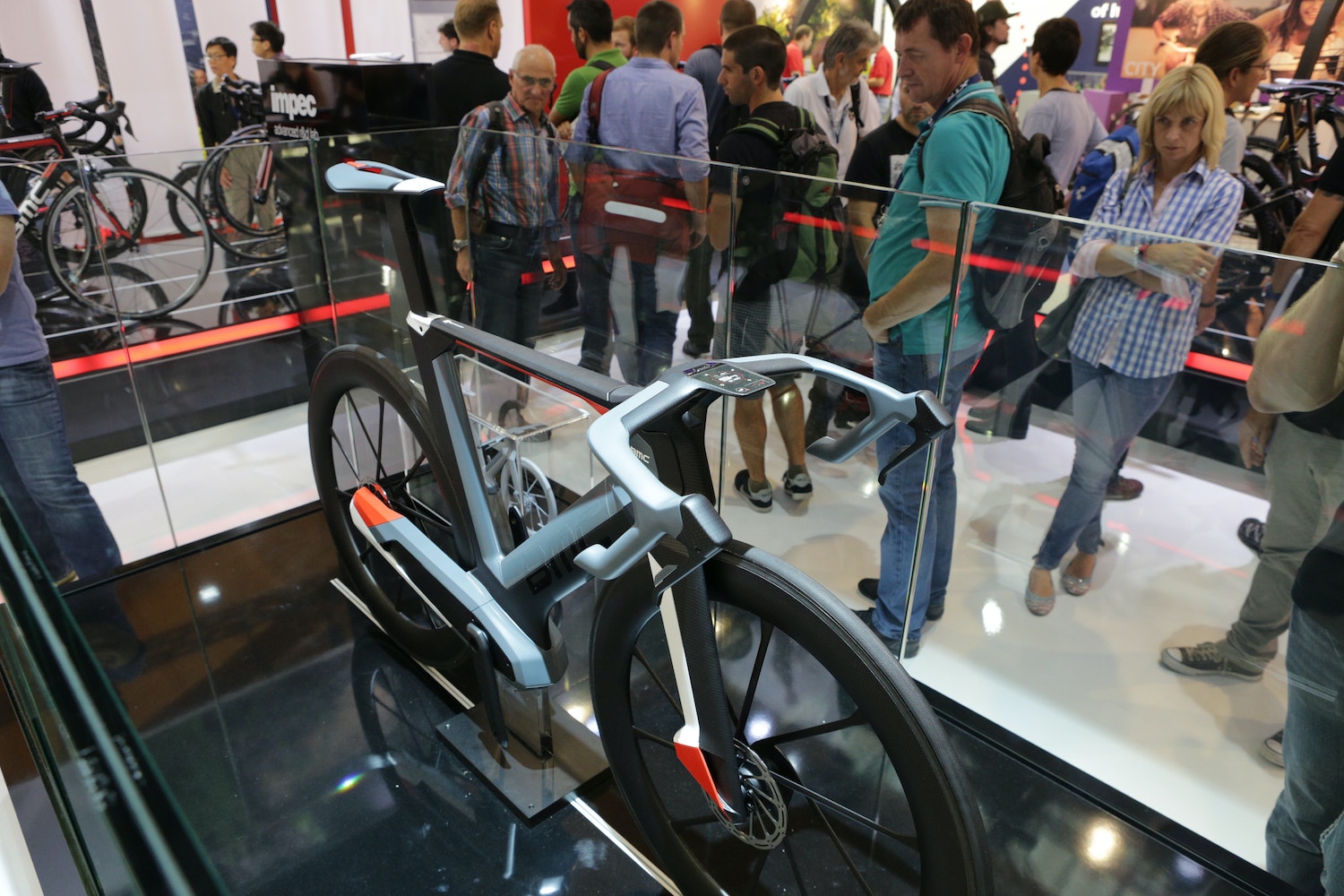 Do you ever think that road cycling has hit the ceiling in terms of development?

Surely there is only so much weight manufacturers can strip from a bike, or the number of extra gears they can add, or the rigidity they can put into their frames.

We hypothesised some ideas that might well come to fruition in the future.

The Next Five Years

Cyclocross and Mountain Bikers have been the early adopters of this technology, so if history is anything to go by, it will soon be common place on road bikes.

SRAM have recently unveiled their 1*drivetrain on the triathlon market releasing a Force version.

If the 1*drivetrain was to be introduced with a 10-42 cluster it would be suitable for 95% of riding with the exception of big mountain passes or very undulating terrain where smaller changes in the gearing would be warranted.

Obviously having a cluster with such a large range would create bigger changes in gears, which would take some getting used to, and could be enough of a deterrent for people to opt for the traditional set up.

Once upon a time all bikes were fixed and had only one gear. Fast forward to today and riders have 22 gears at their disposal.

Fast forward another decade and who’s to say there won’t be 30 or 40 gears to play with?!

Having more gears available on the rear could lead to the 1*drivetrain being a very practical introduction to road cycling.

Get more great reads here at Everything Bike

The UCI have given the green light for testing to begin later this year, with 2017 looking like it will be the year for disc brakes to become home in the pro peloton.

Looking through the history books, cycling is full of these kind of innovations that at first were greeted with scepticism and resistance but are now common place.

Think gears on the downtube, carbon wheels, clip in pedals, even helmets!

Talks that disc brakes will need some refinement before making their way to the pro tour due to the nature of road racing appears to be a small hiccup. Having to round edges of the brakes or put guards in place are momentary time stops that manufacturers will be working on at the moment to ensure they are ready for 2017. The introduction of disc brakes will of course lead to a new era of wheelsets. It is a very crowded market place at the moment which will drive innovation and technology and see each company trying to gain an advantage.

Obviously removing calliper braking removes the need to have a breaking surface on the wheels rim. This means that manufacturers can be far more aggressive in their designs and go further into the aero profiling.

Tyres once upon a time were thought of as the smaller the better. 21mm tyres were common among pro teams, and riders wouldn’t be caught dead rider anything bigger than 23mm.

Nowadays almost every team and every rider is on 25mm tyres with some even going to 28mm (and wider for the classics).

In five years’ time, it’s not so outrageous to think that the peloton might be running 30mm+ tyres on all road stages and even wider for the classics!

The Next Ten Years

It almost seems unfair at the moment that Joe Average can ride around on a 4kg bike while the elite riders are constrained by the UCI’s 6.8kg weight limit.

Surely there will come a time when the UCI will throw off the shackles and we will have a full on arms race to create the most Earth-shattering perfect road bike that weighs next to nothing!

Or could we see the opposite? The UCI put restrictions on other elements of the bike? Wheels having to be the same size and weight, drivetrain have the same ratio and weight, frames conforming to a ‘race’ shape…

Leading to a purely rider driven sport where the technology doesn’t matter, it’s all onto the rider?

Think about a car – the dashboard comes complete, but can be adjusted given the amount of features you would like… Cruise control, Bluetooth, paddle shifting, all things that may not necessarily come standard but will make up the steering console or dash display.

Imagine purchasing your dream bike with the option to have a power meter, cadence sensor, computer and lights all built into the bike at the time of its making?!

No retrofitted components, no aftermarket additions, no cable ties holding things together. All perfectly integrated and at one with the frame, wheels and drivetrain.

Wireless braking – no cables ever!

SRAM will shortly launch their electronic group set complete with wireless technology. So if no cables is achievable for gearing, why not for breaking?

Imagine having no cables whatsoever on the bike…?

Think of the possibilities to frame design, cockpit development… ridiculously stiff frames, clean cockpits, even cockpits being integrated to the frame and fork!

The Rule Makers - The Velominati

Pinarello have recently returned to this space, and who is to say it won’t be the next phase of road cycling development?

Suspension on all road bikes with small amounts of travel allowed to allow manufacturers to create the stiffness frames imaginable, whilst offering the riders something in the way of comfort and compliance.

Most of us either ride with a heart rate monitor or power meter, or have done so at some stage.

Image if that feedback was across more areas, giving riders real time feedback to optimise their performance.

What if there were sensors in the seat, helmet, clothing, handlebars, cranks… everywhere, analysing every possible element of you and the bike?

Image getting feedback straight away that you are sitting in the incorrect position on your seat and you power is going down. Or you are too far over and restricting your breathing. Or you are driving too much from your quads and you need to work through your gluts and calves more.

A bike that thinks for you… How good would that be?!

Tyres are a little low… they auto inflate.

A bike that automatically optimises itself. THAT'S COOL!

So if we could sum up what we think the bike of the future looks like, what would we say?

• With artificial intelligence optimising the bike for you and the conditions

What do you think the next generation of bikes will look like?