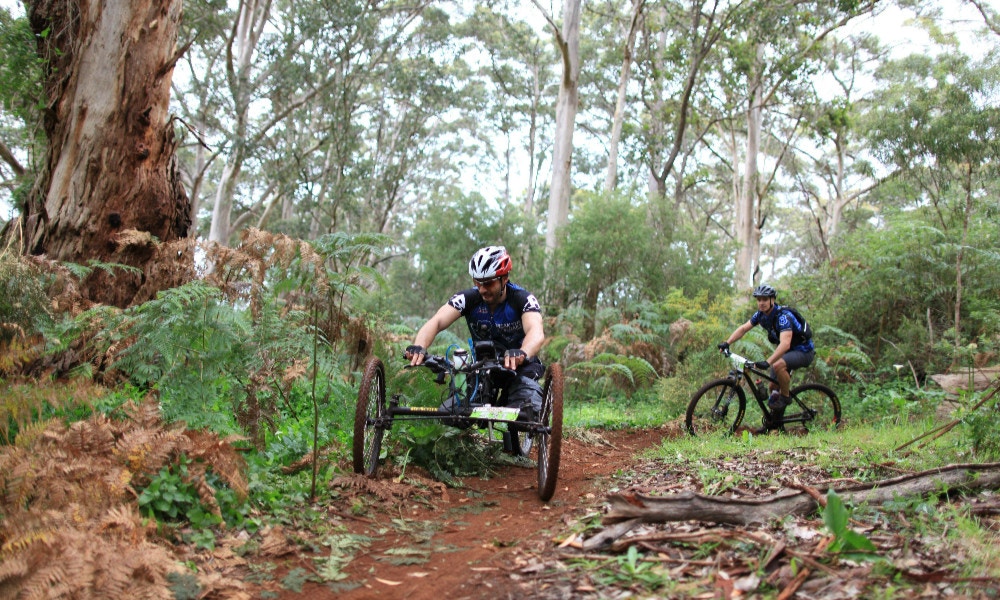 Andrew Liddawi wrote his place into the history books when he became the first person ever to contest an Australian mountain-bike event on a hand-powered tricycle in the 2013 edition of the Cape to Cape MTB stage race.

Now the driving force behind Break the Boundary – a not-for-profit organisation, information resource and website that connects people with mobility issues to the emerging sport of off-road hand cycling (OHRC) – Andrew has completed his most sustained attack on Western Australia’s four-day MTB event yet.

In 2013 Liddawi contested a single C2C stage and the Red Bull Shootout. In 2014 he stepped that up to three stages. This year, on his third attempt, he’s ticked off all four stages, a mammoth 220km task. The 2015 Cape to Cape was the eighth running of the event and held from October 22 to October 25.

In the men’s division Trek Factory Racing MTB’s Kyle Ward overturned a 23-second overnight deficit to Mark Tupalski on the final stage to steal the yellow jersey and the overall win (7h55m04s).

National women’s MTB/road champ and SRAM Yeti Racing rider Peta Mullens, meanwhile, shredded the women’s event into a fine powder with wins in every stage to take ownership of the pink jersey (9h07m00s).

C2C 2015 was no less of a success for the Break the Boundary pair, both of whom came home with a hard-earned finisher’s medal. Liddawi contested 2015 C2C on the same hand-trike he used last year (provided by Wheelchair Sports WA), with some minor modifications to the gearing and other details to better cope with the challenges of the four-day race.

For McGrory, it was only the third time he had ridden his power-assisted hand-trike, which he’d picked up a fortnight before the event.

While Liddawi is yet to fully analyse his effort relative to last year, the 2015 result was his best yet in terms of average speed.

“My average speeds have been clocking more than 10km/h and usually I’m averaging 9km/h,” said Liddawi. “Straight away that’s an improvement there and that makes a huge difference at the end.

“I attribute that to the training and my support riders. Because I’ve ridden with them here and there, they’re just switching on straight away. There’s no warm-up, it’s just – bang! – and we’re straight into it.” See also: The Contact Lake Taupo Cycle Challenge is soon to kick off for 2015

Liddawi also praised the work done by race organisers, which he believed was another key contributing factor to his record speed.

“They’re just a lot more prepared this year and that takes off that extra stress we have of, ‘What if we get lost?’ or ‘What if we take the wrong turn?’. I can’t speak highly enough of them. It makes our job easy and we can just enjoy the scenery, the riding and the challenge.”

Liddawi said he finished the event in his best shape yet, even with the added challenge of the extra stage and distance.

“It’s been great,” he said. “In terms of recovery, general fitness and health I haven’t had any niggles or anything. I’m a little bit sore here and there but it’s nothing like last year, where a day later I was barely getting out of bed.” Finally, Liddawi would like to thank his Break the Boundary support crew, without whom these achievements simply wouldn’t have been possible.

Liddawi has even bigger plans for the coming year. A full helping of C2C 2016 is a formality but some even more exciting developments – not just for him and Break the Boundary but for the sport of off-road hand cycling in Australia in general – are soon to be announced. Stay tuned for details.

To find out more about off-road hand cycling, visit www.breaktheboundary.com

Big thanks to Travis Deane for the great shots of the boys in action!

Keep up with, news, reviews and more from Break the Boundary in the future - follow us on Facie or subscribe to get our email