2015 in Review with Matt White 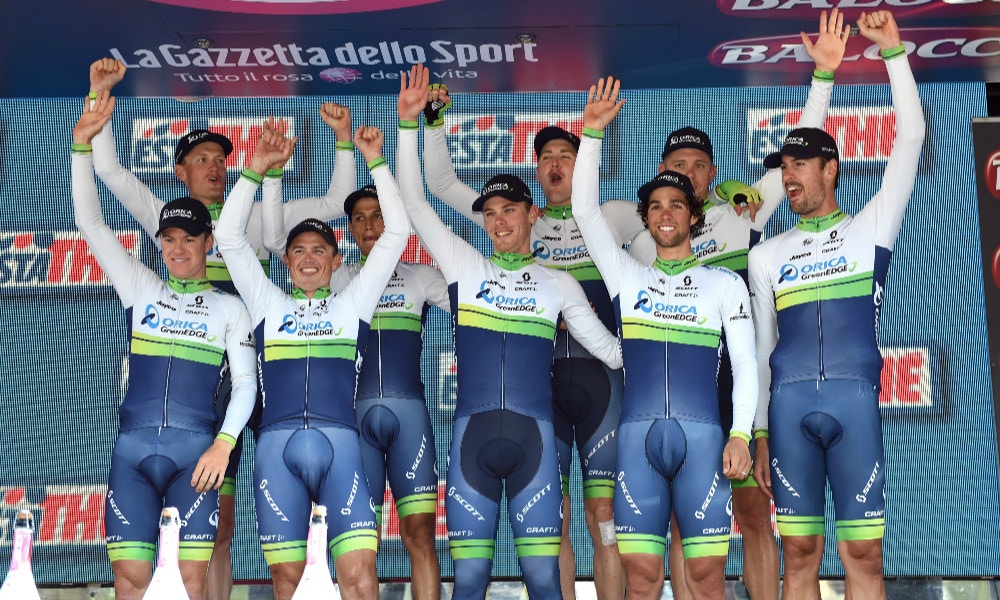 The 2015 UCI World Tour season has come to an end, so what better time to look back on the year that was. For Orica-GreenEDGE, 2015 was a mix of good and bad. The team had some spectacular victories and breakout performances to go along with some challenging times throughout the biggest Grand Tour of the season.

We take a quick look back at the big results for the team during 2015 and chat to Sports Director Matt White to get his take on the year and what lies ahead for 2016. Caleb Ewan started the year with a bang winning his second overall title at the Mitchelton Bay Cycling Classic and narrowly missing out on the Australian National Road Race title. The team then shifted their focus to the Tour Down Under where Darryl Impey came close to victory on multiple stages and his consistency was rewarded with a top ten overall placing.

The team started their European campaign well with Michael Matthews winning a stage and the points classification at the Paris-Nice. The talented young sprinter then followed up with a podium place at Milano-San Remo and Amstel Gold Race. Not to be outdone, Michael Albasini won consecutive stages at the Tour de Romandie and young gun Simon Yates finished sixth overall.

Unfortunately, the team had a Tour de France to forget. Crashes early in the race would wipe out almost half the team and dash any hopes of repeating the success they had at the Giro. Adam Yates finished the Tour well and held on to that good form claiming his first UCI WorldTour victory at Clasica Ciclista San Sebastian shortly after.

As good as the Giro was for the team, it was nothing compared to the success they had at the Vuelta a Espana. Esteban Chaves emerged as a serious GC contender at the Grand Tours and Caleb Ewan made a spectacular debut, winning a tough uphill sprint against John Degenkolb and Peter Sagan. Chaves won two stages and wore the red jersey for six days, smiling and laughing the whole time.

The potential Chaves showed at the Vuelta was on display at the final race of the season, the Abu Dhabi Tour, with a stage win and overall GC victory. Hi Matt, well done on another great year. What did you see as the highlights for the team in 2015?

Thanks, yeah it was a great year. The Giro proved to be very successful again. The first week was fantastic with Gerro, Matthews and Clarkey all wearing the pink jersey. Adam Yates had a big win at San Sebastian and his brother Simon had some equally big results against the best guys in the world at the Dauphine and Romandie.

Matthews was great throughout the season. He really had a consistent year. And then Chaves as well, two great hill top finish wins and holding on over a three-week race to finish fifth overall tells me we have a great GC rider on our hands. And that goes for the Yates boys as well. They had some top 10 finishes on mountain stages at the Tour and are developing really well. It's hard to remember sometimes that they are only 22-years-old, so the future looks bright.

On top of that we are really happy with the development of our younger guys and will look to keep giving them opportunities in 2016.

Esteban had a breakout year, was that a surprise?

Not really. His development is not a surprise, he's a great rider and hard worker. He's up against a lot of other great riders, so to turn that development into race wins on the biggest stage is really where he has taken the next step.

It's also really hard to know how guys are going to go over three-week races. This year has shown us that Esteban and the Yates boys are really in that space now. What were some of the challenges / disappointments of 2015?

The biggest challenge of the year was obviously the Tour. Very early on we had basically four out of the nine guys wiped out. And they were the older more experienced guys, too - Gerro, Impey and Alba. They were gone immediately and Matthews was an injured soldier for the rest of the tour. But it did give the young guys their chance to step up and I think they did. We kept fighting and they showed maturity and had some good results.

How do you improve on such a good year?

As a team we have won an incredible amount of races, close to 150 at the moment I think. As a team, we want to keep developing the young guys and giving them their chance. It can be hard sometimes because they are all hungry athletes so the goal is to keep all that working in harmony.

We have some great young riders like Jack Haig and Robert Power. We are aiming to keep developing these guys and giving them their chance to perform well on the big stage, but it's also important for their confidence to keep doing what they are good at, which is winning races. 2016 is pretty exciting because we know we can target Grand Tours, whereas in the past we have focused on stage wins with the fast guys, or TTT wins with our strong team. I'm confident we now have a number of riders that can podium at any World Tour race on the calendar. We have fast guys, GC guys and some really strong riders.

We'll lay down some definitive goals before we head to camp in mid-November. Planning riders' goals, objectives and development will be the next task.

What events will the team target through the Australian summer?

Most of the Aussie guys will head back for a camp in Australia in November and then race through the summer. Obviously the big races - the bay Crits, Nationals, Cadel's Race, TDU and Jayco Tour. Who knows, maybe an Orica-GreenEDGE clean sweep between a few different riders. Yeah, it's huge, Jonesy does a great job with that. People are always stopping us and telling us what a great job we do with it. It lets people know who we are and what you see is what you get. No other team can offer that and it gives a good insight into people's personality when we're winning, when we're losing and day-to-day. Certainly more to come.

Thanks Matt, enjoy your break and good luck for 2016!

The 2016 Orica-GreenEDGE line up is almost finalised, but we bid a farewell to Simon Clarke, Cameron Meyer and Pieter Weening. We wish them the best of luck with their new teams.

Thanks as always to Graham Watson for the great shots throughout the season.