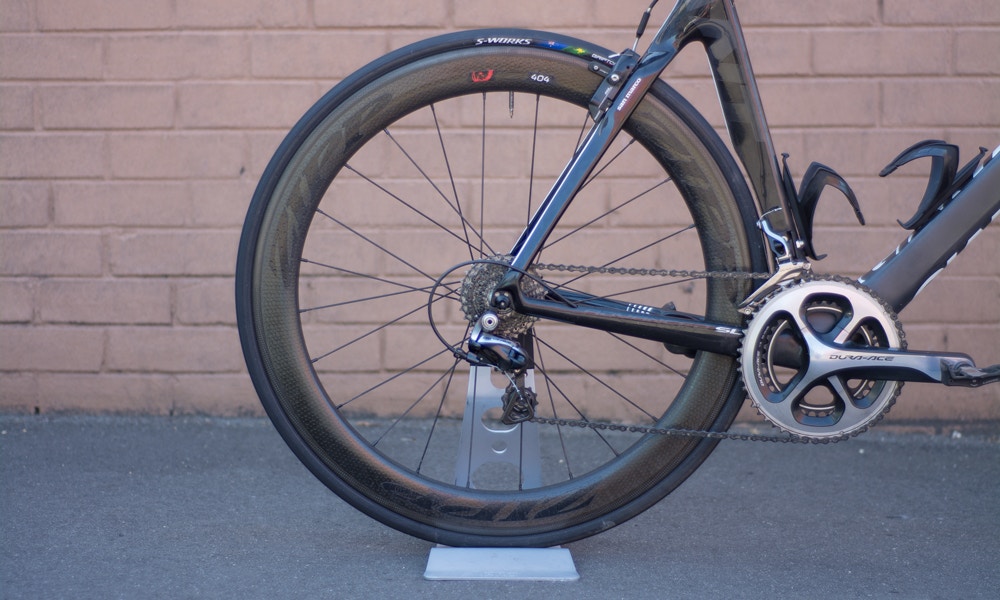 It may surprise some to know that the first Specialized product to hit the shelves was in fact a tyre.

All the way back in 1978, Mike Sinyard saw on obvious shortcoming of quality tyres available to cyclists. He set about creating a tyre that provided an alternative to the heavy, slow rolling options at the time. The Touring Tyre was born and Specialized has been researching and developing lighter, faster, higher quality tyres ever since.

The latest incarnation of Specialized high-performance tyre is the S-Works Turbo tyre - the 'world's fastest' according to Specialized.

You may question how a tyre can be categorised as the world's fastest? Plain and simple, the S-Works Turbo tyre carried Tony Martin to an Individual TT World Championship and Michal Kwiatkowski to an Elite Road Race World Title.

Martin's victory proves the tyre is fast, but Kwiatkowski's victory provides the proof in the pudding. In testing wet conditions, Kwiatkowski attacked the peloton 7km from the line on a fast downhill section. That performance showcased his talent and skill, but the two square inches of rubber keeping him on the road deserves some kudos too. What goes into the S-Works Turbo tyre?

Specialized has done their homework on tyre width and rolling resistance. A nice comparison highlights the benefits.

For the comparison at the Specialized Tire Lab - a load of 50kg and 30 kph was placed on tyres varying in size from 28c to 21c.

Who would have thought? Tyres that are larger and softer are also faster.

The key is in the tyre's contact patch. Greater tyre volume creates a shorter and wider contact patch leading to less resistance and sidewall deformation.

Specialized explains this as, 'a larger volume tyre will deform (bulge) less at its contact patch when rolling or cornering. Deformation is energy lost, pure and simple. So not only will a larger tyre roll more comfortably over a given surface, it will be deforming less as it rolls'.

Put more simply, the S-Works Turbo tyre has a rolling resistance 10% better than its closest competitor.

See also: See what we thought of the women's specific S-Works Amira

Not only do larger tyres offer better rolling resistance, they also offer a better ride quality.

A great feature of the wider tyre is that it can run at a lower pressure than a narrow tyre, offering a greater benefit in ride quality in addition to a reduction in rolling resistance.

The lower tyre pressure creates a more supple tyre, which conforms better to any road surface irregularities and thereby offering a more compliant ride. Previous wisdom had us pumping super skinny 21mm tyres to insane numbers, providing harsh a ride that caused us to feel every slight imperfection in the road surface. Having the best performing tyres in the world is great, but if they need to be replaced every few hundred km, or get punctures easily, they'll stay on the shelves and not on the road.

The S-Works Turbo tyres are equipped with Blackbelt puncture protection. Blackbelt is a 'strip of tightly cross-woven aramid material' that is 'laid atop the casing directly under the tyre tread.'

The protective layer offers some resistance to typical road hazards - glass, debris, even tacs (if you happen to live in Melbourne's inner northern suburbs).

Specialized uses industry standard tests - 'Nail in tread' and 'Blade in sidewall' - to assess the robustness of their tyres and the team is satisfied the new S-Works Turbo tyres 'set the standard again'.

An in-between option is the Roubaix tyre. It shares similar features with the S-Works Turbo tyre plus 'bead to bead' Endurant Casing for extra puncture protection.

See also: Our expert Bike Panel give their insight on the importance of tyres

The test and review results

We passed them around the office to get a wide variety of opinions. Here's what we found.

Pete: When the tyres first went on I was concerned they might be a little spongey. Soon into a loop up and around the Dandenongs, my concerns were put to rest. Descending Devils Elbow I felt smooth and steady on the road, and when cornering the tyres held the road like I was on rails. Over the deader roads, the vibrations were dampened nicely providing a comfortable ride. At the same time, there was no sense of drag when on smoother roads.

Stevie: Ride comfort was excellent given in the last two months I've ridden on Continental GP4000S and Schwalbe Ones, which I regard as market leaders. Rolling resistance is an important feature with road tyres, they again seem to be very comparable with similar I've ridden in the past.

Adam: I normally run 25mm tyres and when I first put the 24mm S-Works Turbo tyres on, they looked a lot thinner which initially concerned me. Once I was on the bike and rolling I didn't give it a second thought. I'm always mindful not to let the 'placebo' effect take over when testing product, but I certainly felt these tyres roll much faster than my stock standard ones. They handled the country roads pretty well too.

Chris: The overall grip and the way these tyres travel is amazing. I'm used to riding the Specialized Roubaix Experts 23/25's with what I believe is the same Gripton Technology. The Roubaix tyres are obviously a slightly heavier / more robust tyre - they've lasted me 1000's of kms with weekly shredding on beach road, Crit racing and fast group rides.

Alistair: I normally ride 25mm Schwalbe Ones, which I moved to approximately a year ago. I have been racing and training on these every day since. First thing I noticed when I changed these over was their recommended tyre pressure was back up to 110-125PSI as opposed to the recommended 100’ish for the 25mm. They seemed to take a little longer for me to get up to speed but interestingly, once rolling it seemed much easier to maintain that rolling speed. I am not sure if this is due to that difference in pressure, but I actually think I prefer that higher pressure, whether it be for scientific reason or purely mental.

How did they perform in the wet?

Pete: Only one ride was on damp roads (after overnight showers) and the tyres felt secure. With tyres, if you're not thinking about them, they're doing their job.

Stevie: I was lucky enough to ride only once on wet roads during the review period, I felt in control and comfortable to lead into corners.

Adam: I didn't get a chance to ride in the wet, surprisingly Melbourne put on a stellar fortnight of weather.

Who are they suited to? Who would buy them?

Pete: Racers who train a lot and are looking for low rolling resistance and smooth ride. If they can match the durability of the Continental GP4000S as well as they matched the ride, I'd buy them in a flash.

Stevie: Any road rider who is after a high performing tyre that trains and races on one set, but I think your average weekend warrior would be comfortable and suited to using these as well.

Adam: I definitely think these tyres are suitable for all conditions. It's hard to accurately judge their puncture protection in two weeks of riding, that is probably the only thing I would be mindful of if I was planning to ride them all year round. A better option might be to use the S-Works Turbo tyres on 'race' day or during summer, and something like a Roubaix tyre during 'training' or winter months.

Chris: These are race tyres, not suited as a daily training tyre.

Pete: I reckon the only thing I'm slightly concerned about at this stage is their durability. I did ride 500+km over some fairly demanding roads without a puncture....but there are a few cuts that I've cleaned glass out of.

Adam: Not an improvement, but I would have loved to get on the 26mm and see how they perform. And obviously riding them for 1,000 km+ would be great to fully test their durability.

Chris: After approximately 500km of solid riding the tyres are pretty slashed up and splitting in the direction of the travel.

Alistair: I did feel a little ‘loose’ when entering a corner at pace. On my first ride, the bunch entered a corner which doesn’t have the best surface. For whatever reason I ran a lot wider than I normally would, and this was repeated again on the next ride. It wasn’t a significant issue but certainly worth noting. In saying that, cornering on a smooth surface for me showed no difference.

Pete: Tyres matter to me. I like to ride smooth and fast and not get punctures and after a number of years on the road now, I've settled on what I've found to be the sweetest spot of the Continental GP4000S. I found these to be on par with those in terms of performance. They offer excellent (i.e. low) rolling resistance and great grip on all surfaces.

I rode the Dandenongs, Beach Rd, the hills of Eltham, the country roads around Warrnambool and the Boulevards just east of Melbourne. The road surfaces varied from hot mix to gravel and there were plenty of dead roads in that mix as well.

Stevie: I didn't get any punctures, although I did remove a large piece of glass that was embedded in the rear tyre. Once removed I was concerned it would puncture but hasn't as yet. Overall I think they are an excellent tyre and comparable with market leaders. I'm not aware of their RRP but I'd buy them if they were comparable price wise with Continental GP4000S and Schwalbe Ones.

Adam: I really liked them. They felt considerably faster than my standard tyres. I'm not sure I'd be keen to ride them all year round until I fully tested their durability, but if speed is your thing, then these are a good option.

Chris: My guess is that the S-Works Turbo tyre is the weekend race lite version - they clearly roll faster and easier - they corner really nicely... they just didn't survive the streets from a daily wear and tear perspective. So in all honesty (and this comes from a Specialized rider) the S-Works Turbo tyres are a race weapon - not a daily trainer / rider.

Alistair: After two weeks of riding there appears to be little to no cuts or abrasions on the tyre itself. It always seems that my Schwalbes get cut up on the first ride and have a shorter life, whereas after two weeks on these, it would appear you would get a lot more km out of them, which is a massive bonus.

Overall I have enjoyed riding on them and testing. Unfortunately I haven’t had the chance to race on them, so would be hesitant to say whether or not I would use them going forward without having used them under every condition. There is certainly some merit in the fact they seemed to maintain their rolling speed with not as much effort and I also like the fact they have held up without any noticeable wear. RRP from Specialized.com for S-Works Turbo tyre is $69.95