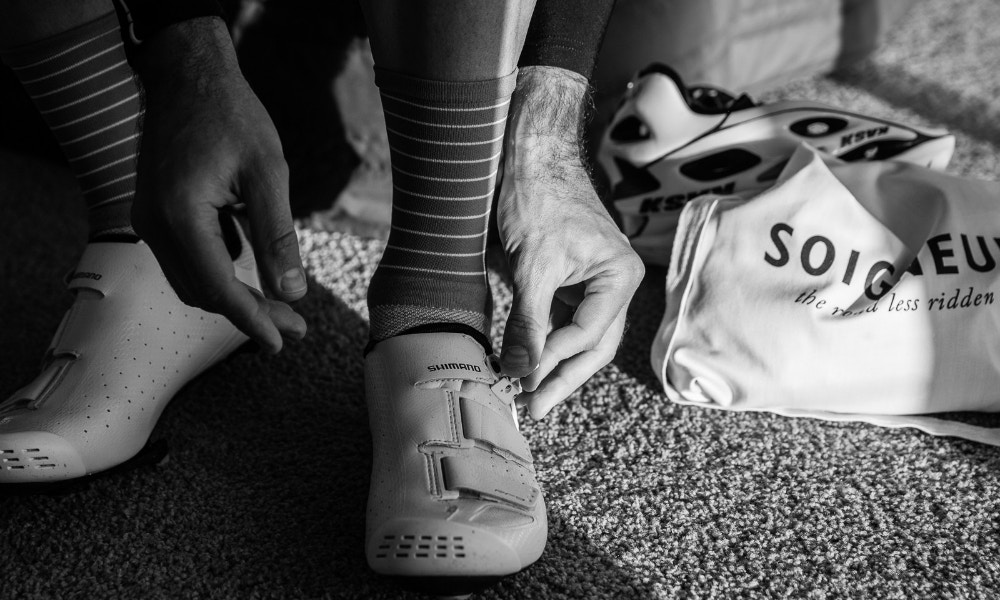 Special thanks to Jeff Curtes for his great images and for putting himself in some interesting situations to get them!

“No need to bring your TT rig. We have organised you something much more suitable – a Specialized Ruby PRO Disc 51cm. We will set it up for you when you arrive on Friday evening.” And with that email began the precursor to an outstanding riding weekend away in the King Valley courtesy of our friends at Shimano.

To be fair, I had little idea of what was in store.

It didn’t really dawn on me that I would do nothing – absolutely nothing – to organise any of the rides or any of the weekend away, for that matter. I just had to get to Tatong, North-east Victoria with my helmet, my pedals and my brand new, spanking white Shimano RP5 shoes, which were going to get quite the work-out through King Valley. I wouldn’t have to queue for my registration in the annual 115km Sam Miranda Gran Fondo on Saturday, as the Soigneur team had it all covered. I wouldn’t have to think about lunch after the Gran Fondo, as a feast had been planned above Shimano’s portable store, overlooking the stunning winery.

I wouldn’t have to wash my borrowed bike or service it, as Sam would be keeping it in mint condition the whole way through.

I wouldn’t have to buy market fresh ingredients to whip up gourmet getaway meals, as Daniel and Jason were all over the culinary creations. They kept us well fuelled (see menu below) with the most incredible, colourful salads of goodness, grilled proteins worthy of a chef’s hat, local produce, fresh breads, home cooked brekkies, and wholesome nutrition bars (some from the Good Fuel Company, others home made by Angela Weigard) to keep the engines going. I wouldn’t have to scope out the local pub to make sure they also knew their way around a wickedly good chicken parmie, because of course that box had already been ticked during a prior recky.

I wouldn’t have to spend endless hours on Airbnb searching for that seemingly non-existent luxury retreat that had enough bedrooms and bathrooms to welcome a crew.

I certainly wouldn’t have to figure out which roads to take to pull together one of Victoria’s best riding experiences; Soigneur had already covered them all to stitch together the ultimate 125km loop that featured everything from bush climbs, meandering rivers, corrugated gravel to keep us on our toes and sweeping descents.

I’m almost embarrassed to admit I wouldn’t even have to fill my bidon. Almost.

The only thing Soigneur couldn’t master brilliantly was the weather (but it turned out the Gods were on our side this weekend) and the mobile reception (maybe that wasn’t such a bad thing after all).

The weekend was all about like-minded riders getting together to test out some of Shimano and Pearl Izumi’s 2016 product. They’ve developed the Road Performance (RP) series of shoe in mind for that endurance cyclist – these kicks are all about speed, rigidity and comfort as your feet do the hard yards over plenty of hours and plenty of kilometres.

There’s four models in the new RP series and we were lucky enough to try out RP5, which are made for the recreational rider who’s up for giving it a solid nudge. The glass fibre reinforced nylon sole with carbon fibre composite plate delivers a stiff, rigid platform for transferring power over a prolonged period of time without your feet screaming for ice, salt, massage, Voltaren or all of the above. There’s a bit more give in the upper part of the shoe, which I personally find crucial. I’ve been in the situation before where a shoe hasn’t had enough moulding capacity around my upper foot and toes, which over six hours of grinding in the European Alps has resulted in a temporary crippling affect. These Shimanos – not so. Granted we were in the North-east hills versus Europe’s highest summits, but the shoe felt snug yet comfortable. Training for Tassie’s Three Peaks I am confident this is the shoe that will help get me through. See also: How to keep your white shoes, white

Getting into the RP5s isn’t as straight forward as it is with some of my other shoes; these ones tended not to open as wide so for someone with a foot almost as broad as it is long, there was a bit of shuffling before I’d get into these each morning. That said it’s so minor – I’d prefer a little bit of to-ing and fro-ing followed by a seamless feel for the rest of the day, versus the other way around. The classic ratchet system is straight forward and easy to adjust once you’re riding and perhaps need to create a bit more space as the foot swells in the heat.

It’s the look that tops these shoes off, though. US Chalk White is the precise shade I've white I'd use to describe these shoes, which assume Shimano’s classic trademark Dynalast shape (developed by Shimano’s R+D to minimise energy loss on especially long rides). When they arrived on my desk they were the instant recipient of many sideways glances and green eyed vibes. I almost felt guilty getting hold of them. But then I got over that… Let's just say I will be buying plenty of Baby Wipes to keep these bad boys looking as fresh and clean as they did on day one.

Where did my Shimano RP5s take me?

Saturday’s ride, the Sam Miranda Winery Gran Fondo, was a 115km loop through parts of the King Valley. It wasn’t for the faint-hearted, and this had less to do with the ominous Strada Nera (which I thought was nowhere near as challenging as all the hype had led me to believe) and more to do with the quality of some of the gravel roads. Overall this was a stunning loop but the last 20km in particular offered up a mean menu of highly corrugated, sandy in parts, gravel road which, on the day we were out and about, combined with one nasty head wind to create a challenging session in the saddle. That said this is a great day and I would strongly recommend it to anyone who’s keen to see the King Valley showcase its very best in terms of landscape, local produce and general awesome just-get-in-there-and-get-dirty regional riding atmosphere.

Sunday’s ride was 100 per cent designed by our friends at Soigneur, and didn’t it have all the trademarks of a thoughtful, well-considered, spectacular ride. Starting in Tatong (not too far from Swanpool) we made our way up country along the Tatong-Tolmie Rd, riding alongside the beautiful Holland Creek before taking a 12km gravel ascent through some truly majestic bush landscape. As we neared the infamous Kelly Tree the vista opened up to the valley and surrounding hills, making this a stand-out ride before we’d even got to the halfway point. We stopped for a seriously sensational gourmet morning tea (more like lunch before lunch) at Power’s Lookout, one of the area’s most iconic vantage points, before taking the easy ascent down and back via Strada Nera, which we’d climbed the day prior. After this decent it was largely undulating riding – all of it absolutely spectacular. In fact as a local of that area I had to keep pinching myself. I haven’t seen the region this green in years; at times it felt like I was riding through English countryside. We saw one car during the entire (just shy of) five hours we spent in the saddle although that said, it did belong to a hunter and they were out shooting. Nothing like a ride through the country – forget traffic light frustrations, instead just keep your ears open for rifle shots. Ha! See also: Shannon Hope is a junior kiwi mountain biker making tracks of her own

No surprises that the whole time we were looked after by Soigneur and their Team Sky style Jags; the guys were on hand to warn motorists we were riding, but to also deal with any fallen chains or flats. The only major problem with this weekend has been how to return to reality. I have to wrap up here now to go charge my lights, fill my bidon and grease my chain. It’s a shock to the system…

Blanched greens with almonds and currants Keep up with news, reviews, interviews and more - follow us on facie or subscribe to get our regular email