Kiwis and Aussies On Tour 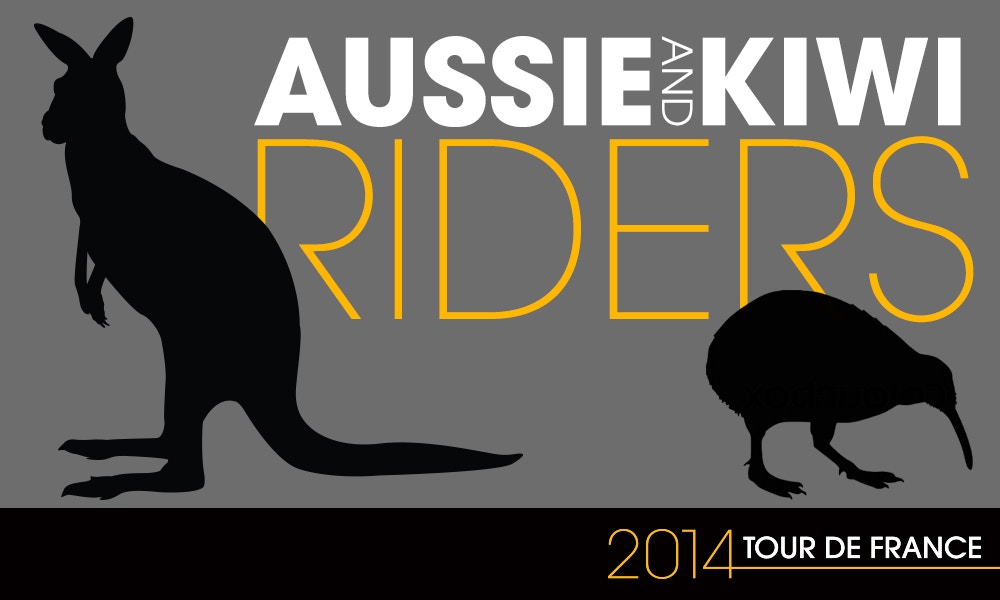 Once upon a time the Tour de France was dominated by European cyclists. Over the last several decades, Kiwis and Aussies have become part of the world-class peloton and risen to the very highest ranks in this race.

But they've worked hard for their place - once upon a time the Tour de France was a battle ground for European cyclists.

A competitive cycling culture was still growing back in Aus and NZ when this event was gaining more and more momentum on The Continent. Add to this the layer of difficulty involved in getting over to Europe to race, as well as financing that process (the Melbourne Herald in Australia and The Sun in New Zealand began a fund to send an Australasian team over in 1927), and it's probably no surprise that it took us a little longer to edge in on this great event.

How things have changed!

This year shows a stellar cast of home-grown talent representing us in the big league. But before we look at the pros making us proud, we briefly step back in time...

This year's Tour de France commemorated the 100th anniversary of the start of WWI, which turned Flanders fields into a veritable killing zone. Ypres, Belgium, was at the time a strategic pinpoint for invading Germans intent on controlling Belgium and France. An estimated half a million soldiers were lost on both sides of fighting. Of the 313,000+ Australian soldiers to embark on overseas duty during WWI, 65% were killed or wounded, compared to an equally devastating 59% of the New Zealand force. RIP our ANZACs.

Who's at the Tour this year?

As a team, the Aussie owned Orica-GreenEDGE has helped put cycling down under on the world map.

A Gold Coast lad, former Australian Champion Time Trial cyclist Hansen followed Andre Greipel over to Lotto-Belisol in 2011, and is now based in the Czech Republic. Prior to his career as a professional cyclist, Hansen actually relocated to Austria to improve his cycling for triathlon! He’s known as ‘Croc Man’ – a reference to three wins at the incredibly challenging Crocodile Trophy MTB event. Hansen competed in all three Grand Tours back to back in 2012 and 2013.

One of two Kiwis racing the 2014 Tour de France (see Jack Bauer), Dunedin’s Greg Henderson was forced to withdraw from this year’s race during Stage 4, when he hit the ground hard at a roundabout. Unfortunately for Henderson, he hit his right knee, which had already seen previous injuries, opening a 12cm wound from which the patella was visible. This was to be 37 year old Henderson’s third Tour de France campaign. Prior to the Tour, Henderson had come first at this year’s Buchten-Buchten Stage 2, third in the World Ports Classic Stage 2 and the Ronde van Limburg.

Jack Bauer’s first Tour de France experience didn’t end the way he would have envisaged, with a crash on Stage 19 that hurtled him into barbed wire. He suffered considerable facial injuries and was forced to withdraw. We’re hoping 2014 will be an altogether different story for Bauer, who will also be competing as part of the New Zealand road cycling team at this year’s Commonwealth Games in Glasgow (taking place one week after the Tour is completed). Some of Bauer’s recent stand-out moments include first in this year’s Herald Sun prologue ITT, second in the New Zealand RR Championships, and seventh at the Bayern-Rundfahrt Stage 4. In 2013 Bauer won the Japan Cup and placed fifth in the Tour of Britain.

An Aussie who now lives in Germany’s Fribourg-en-Brisgau, Heinrich is a sprinter with a quirk – he hardly ever wears cycling gloves, no matter where the Mercury is at. Past successes for Haussler include winner of Stage 5 and third in Stage 3 of the Bayern Rundfahrt 2013, fourth in both the Gent-Wevelgem and Paris-Bourges 2013, third in Stage 5 and second in Stage 2 of the 2012 Tour de Pologne, and the green jersey in the 2012 Paris-Nice. Hayman joined OGE this year after a four-year contract with Team Sky. He’s an experienced domestique who particularly enjoys racing the Classics. A Commonwealth Games Road Race gold medallist in 2006, Hayman’s career is built on supporting other lead riders. Despite this, he’s enjoyed many successes in his own right including second in last year’s Tour de Suisse Stage 6, second in the 2012 Tour de Pologne Stage 7 and first in Paris-Bourges in 2011. Born in Sydney, New South Wales, Hayman is now based in Belgium.

Another Tassie featuring in this year’s Tour de France ANZAC line-up, Matthew Goss joined Orica-GreenEDGE to assume a sprinting role. Prior to that he blazed a trial in 2011 with a win in Milan-San Remo as well as stages of Paris-Nice, Tour of Oman, Tour of California and Tour Down Under. This year we've seen him come second in stage 3 of Paris-Nice, third in Stage 5 and fourth in Stage 8 of Tour of California, second in Stage 1 of the Herald Sun Tour, sixth in Stage 6 of the Tour Down Under… Great stuff indeed! Born and bred in the New South Wales town of Bathurst, Mark Renshaw first cut his competitive cycling teeth on track, not on road, and became a Junior World Champion in Olympic Sprint in the U19 age group. He returned the following year, still in U19, but this time collected first in Olympic Sprint as well as the Time Trial, the Team Pursuit, the Scratch Race and second in the Individual Pursuit and fourth in the Keirin. Hello – Renshaw was one to watch.

Renshaw was keen to move into road riding, using his track handling skills as a great base for becoming a lead-out rider. It was a superb move and before long, he had established himself as a great lead-out, particularly for Mark Cavendish and HTC-Columbia. The Cav-Renshaw duo proved incredibly successful, until Cavendish went to Sky and Renshaw to Rabobank before the two were eventually back and riding for the same team – OPQ.

Renshaw was diagnosed with Epstein-Barr virus in 2010, which had considerable impact on his cycling that year.

Recent successes this year include third in Stage 3 of the Tour de France, second in Stage 6 of the Tour Down Under and Stage 4 of the Dubai Tour, and first in Stage 1 of the Tirreno-Adriatico. See who else is in the saddle for OPQ

A three-time World Time Trial Champion and father of three, Michael Rogers is a Canberra lad who until Stage 10 was tasked with the challenge of supporting one of the biggest names in this year’s line-up, Alberto Contador. One of the greatest domestiques on the pro circuit, Rogers was and still is more than up for the task.

Until last year’s Giro d’Italia, a Stage win at a Grand Tour had alluded Rogers. But this year he scooped the pool with two Stage wins. Rogers’ names has been associated with testing positive for clenbuterol, a prohibited substance, and he has fought hard to deny the accusations (his team mate Contador was stripped of his 2010 Tour de France win for also testing positive to this substance).

Rogers’ 2014 has been impressive to date – his Giro wins and fourth in the Giro TTT, second in Route du Sud Stage 2, third overall… This is definitely the kind of rider who would have had Contador’s back, had he not withdrawn. Perhaps, like Porte, this could be an opportunity for Rogers to shine? This is a man to watch at the 2014 Tour de France. Since Chris Froome’s withdrawal on Stage 5, Richie Porte has assumed the role of team leader and is proving himself to be highly competent in handling the position. Tassie born and bred, Porte has enjoyed some outstanding successes, including a win in last year’s Paris-Nice, second in this year’s Vuelta a Andalucia, first at Stage 5 of the Tour Down Under, and a Time Trial win at the 2010 Tour of Romandie. We are itching to see what he’s capable of now he has GC on his radar at this year’s Tour. Clarkey is an aggressive all-round cyclist who’s built a name for himself not only as a climber, but also a super strong finisher. Some of his 2014 palmares include first at the Herald Sun Tour, and second on stage two and third on stage three of the Tirreno-Adriatico. A brilliant cyclist and a great guy, Simon Clarke is an impressive asset to Australian cycling. He’s one of the biggest names in Australian cycling, and for good reason. Known as the Sniper for his incredible focus and long-term zeroing in on targets, although he’s had a bumpy start to this year’s Tour Gerro is never one to rule out. Zakkari was born in the country Victorian town of Castlemaine, and established himself early as a rider to watch. Now 26 years old, Dempster started clocking impressive wins from the age of 16/17 years and first signed with Drapac Porsche. In 2004 he came first in the Commonwealth Youth Championships Track, Pursuit and Scratch. One year later and he was racing overseas where he came 3rd in the World Championship Track, Team Pursuit, Juniors in Vienna, Austria. In 2007 Dempster took first in the National Champions U23s ITT, Track, Scratch and Team Pursuit and that same year came third in Stage 1 of the Tour of Japan (which he repeated in 2008). Fast forward to recent times and Dempster signed with Team NetApp – Endura in 2013, and has clocked ninth in the Australian National Championships RR, eighth in Stage 3 of Tour of Oman, fourth in Stage 7 of Tour of California and eleventh in Stage 3 of this year’s Tour.