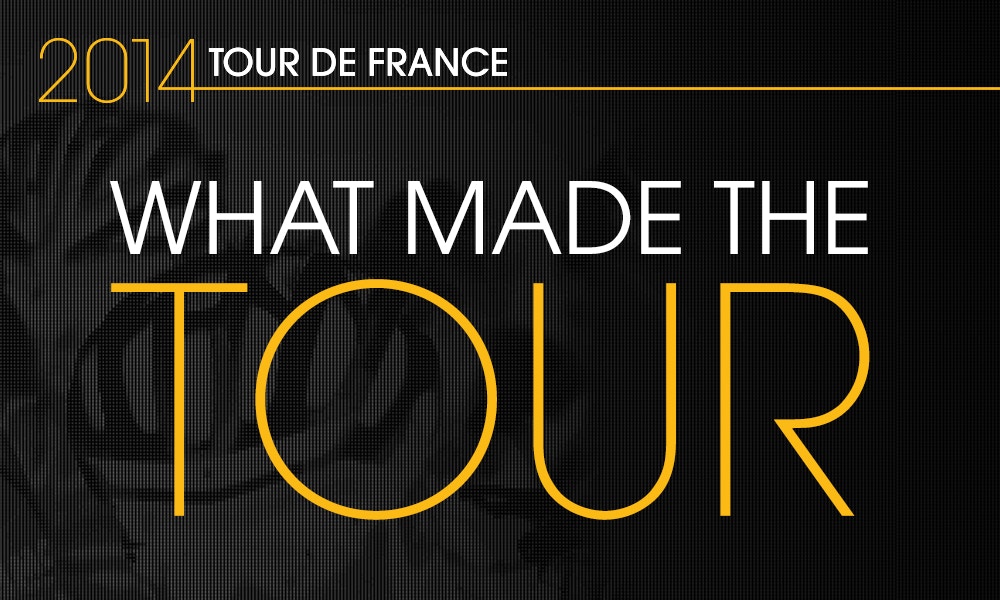 It actually wasn’t all that hard to single out some of the top stand-out moments of this year’s Tour de France. Some of them make the list for all the right reasons, others for all the wrong. But once again it’s been a thrilling 21 days, and we’ll soon be starting the countdown for 2015!

So what were some of the stand-out moments for us?

Definitely a stand-out start to the 101st Tour de France, but sadly not all for the right reasons.

Firstly – the people of Great Britain. They really came out in full support of this great race. Estimates of some two-million people crowded the route as it made its way not only to Harrogate, but in days following to London. The race began in Royal fashion (the Duke and Duchess of Cambridge along with Prince Harry there to see cyclists take off, as well as cross the line). Mother Nature put on a marvellous show, as though she knew the world was watching and had to go into bat for the UK and their otherwise questionable weather reputation.

Global favourite Jens Voigt (Trek Factory Racing) farewelled his Grand Tour days in total class, breaking away from the peloton and charging those ‘shut up legs’ to claim the first polka dot jersey.

But the powerhouse ride was eclipsed by fellow German Marcel Kittel (Giant Shimano), who sprinted to the line to claim the first yellow jersey. The action didn’t stop there. A spill between Mark Cavendish (Omega-Pharma – Quickstep) and Simon Gerrans (Orica-GreenEDGE) ended the Aussie’s campaign for a Stage 1 win, and put him on the back foot for the remaining Tour (until he withdrew in the Pyrenees). But it was even worse (at least it seemed like that on the day) for the Briton, who was surely crowd favourite on home soil. The Missile from Manx ended up breaking his collarbone and withdrawing from the rest of the Tour. Check out the Cav Crash Here

The first real shock spill – but by no means the last.

This Stage was to commemorate the beginning of World War I, and as such it travelled through the notorious battle fields near Ypres, and the now infamous cobblestones.

Hell of a Bumpy Ride

This tricky terrain meant Stage 5 was always going to be a stand-out and boy, did it live up to expectations. Mother Nature put on a show to make things as slippery and uncomfortable as she could, and we saw a major upset – Chris Froome from Team Sky withdrawing. He’d suffered a terrible fall during Stage 4 and had gone into this day vulnerable – controlling the bike was imperative over these cobblestones and Froome’s body was never going to deliver. One of the major contenders for GC title, and the winner of last year’s Tour de France, this withdraw was huge news.

But again – Froome was not to be the last shock factor.

Another major upset on this day with the withdrawal of another major GC contender, Alberto Contador of Tinkoff-Saxo. The route was just starting to flirt with some climbs - Contador’s chance to start to light things up - when a spill resulted in a broken tibia. Incredibly, Contador got back on the bike to ride another 10km or so, before the pain proved overwhelming. A remarkable effort from a champion cyclist who is known to dig deep and make the impossible possible. On France’s national Bastille Day, it was also terrific to see Frenchman Tony Gallopin (Lotto-Belisol) wear yellow for not only his team, but his country. A huge honour and a moment of great national pride.

Shock - Contador Out. Read About it Here

Saw an incredible effort of riding by Jack Bauer for Garmin-Sharp. Along with IAM Cycling’s Martin Elmiger, the two pulled away from the peloton and spent most of the course riding as a duo in some terrible conditions.

Bauer, who at the time thought he’d saved just enough in the tank, made his move 400m from the finishing line. But a bunch had caught up and the Kiwi lost all strength from his legs just 50m from the finish. He’d put in a remarkable effort, made all the more gripping given he’s a domestique and used to doing the work for someone else, only to see it go pear shaped at the very, very end.

This was a heart-breaker of a Stage.

And we celebrated a win for Down Under with Michael Rogers of Tinkoff-Saxo taking the honours. Rogers’ first Stage win at the Tour de France, it was not only terrific to see an Aussie on-top of the podium, but to see an Aussie domestique! Rogers’ Tour campaign didn’t quite roll out the way he and his team had anticipated, with the loss of their leader Alberto Contador early (Stage 10, above). Rogers himself was the first to admit that had Contador remained in contention, a win for the Aussie would have been highly unlikely – he would be too exhausted at this point working for his leader. It might not have been yellow, but it was gold and green all the way on Stage 16. Find Out About the Women on La Course

The 90km women’s event, La Course, was always going to be a stand-out moment of the Tour. Firstly – because it was re-writing history and bringing an elite women’s race back into the schedule. Secondly, because each and every female cyclist in the 20-team strong line-up knew this could be her moment to be part of something absolutely massive.

The first Aussie to finish was Lizzie Williams in twelfth place, whilst Sweden’s Emma Johansson came 8th for Orica-AIS. BikeExchange mate Rachel Neylan showed she is coming back to form, placing 35th in the elite field.

‘Chapeau’ to every single cyclist who started and finished this year’s Tour de France. Like every Tour before it, the event delivered unimaginable challenges and hardships. But it has to be said, this year really did deliver some stand-out and consistent performances.

2014 Tour de France Stage wins: Stage 2, Stage 10, Stage 13, Stage 18. From Stage two we saw Nibali slip into the yellow jersey, and stay in it for the remainder of the Tour. Indeed, the Italian dominated for 18 of the 21 days and rightfully took to the Podium in Paris wearing a colour that had become like second skin.

Nibali’s speech said it all:

“… I anticipated that no feeling of happiness could be compared to what we feel on the podium at the Champs-Elysées. It's even more beautiful than what I could imagine. I want to dedicate this victory to my team and my family. Hadn't I had my wife Rachele and my baby girl Emma on my side, hadn't I grown up as a young cyclist with parents like mine, I'm not sure I would have made it to here. I have felt such a strong emotion very few times in my life. So I say thanks to the Tour, thanks to all the French people and thanks to everyone.”

This man is the Green Hulk, there’s no doubt about it. Sagan was gunning for several Stage wins, but it was the green jersey that was to be his legacy from this year’s Tour. His last chance for a win might have been Stage 19, were it not for a spill just 3km from the finish that ended Sagan’s chance to be top of the podium

Can Anyone Else Park a Bike Like This? Sagan in Action

Thanks to some seriously talented artwork, Sagan and his Cannondale team definitely stood out with their pimped up bikes – outstanding. Check Out the Pros Pimped Pushies

2014 Tour de France Stage wins: Stage 1, Stage 3, Stage 4, Stage 21. Put this man anywhere near a sprint finish, and watch him fly. German Kittel showed us once again there’s no stopping this man when it comes to fast, furious, calculated sprint finishes. Lotto-Belisol’s Andre Greipel managed to cross the line first on Stage 6, and the hills saw pain spread all over Kittel, but overall he dominated when it came to the sprint victories. It seemed only right that the final leg of the Tour see this man surge to the iconic finish line to take home his last Stage win. He took out two Stage victories this year, but Poland’s Rafal Majka showed he was this year’s mountain man, dominating the polka dot jersey once the serious ascents kicked in.

Does support team-dripping-with-most-style stand-out moment go to Team Sky in their tailor-made Jaguar F-Type Coupe, along with Mark Cavendish rocking his apres-velo Oakleys?

And so another Tour wraps up…

OK granted the Tour de France lost some of its sizzle when current giants such as Cavendish, Froome and Contador began to fall, and Nibali’s lead looked more and more stable.

But those gutsy climbs and flying descents, the rocketing sprints, the gruelling cobblestones, the occasionally shocking weather, the every-now-and-again agro, the creativity and energy of the crowds, the team camaraderie, the grace of the peloton (at least from our perspective) and the surrounding beauty proved once again that this is indeed the inimitable, the grandest Grand Tour of the them all.

Stay in touch with our Everything Bike Blog